After completing the last major rigging item, which was the leading edge flaps, I'm going back to detailing the exterior, which will be followed by doing what I can with the interior. Right now, the file size is about 114 MB in .lxo format, and at render time, is producing about 24 million polygons.

I've also indulged myself with a couple of composited images, and some volumetric effects, below. 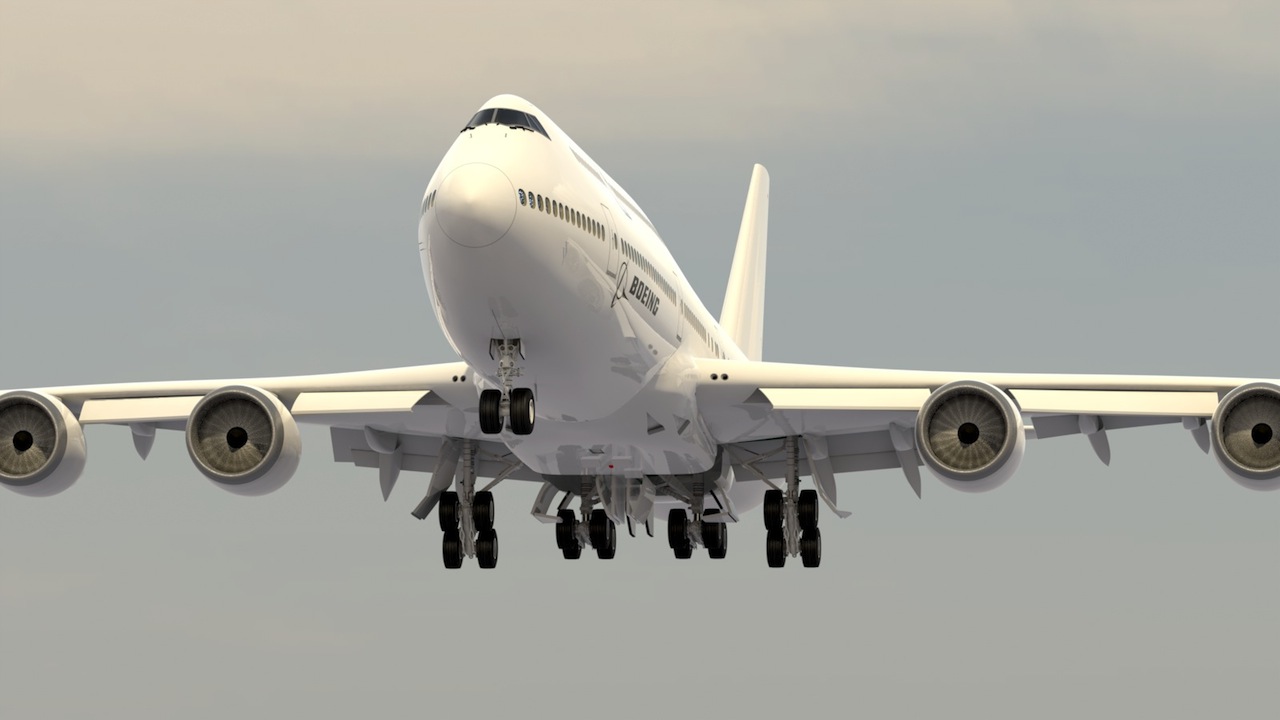 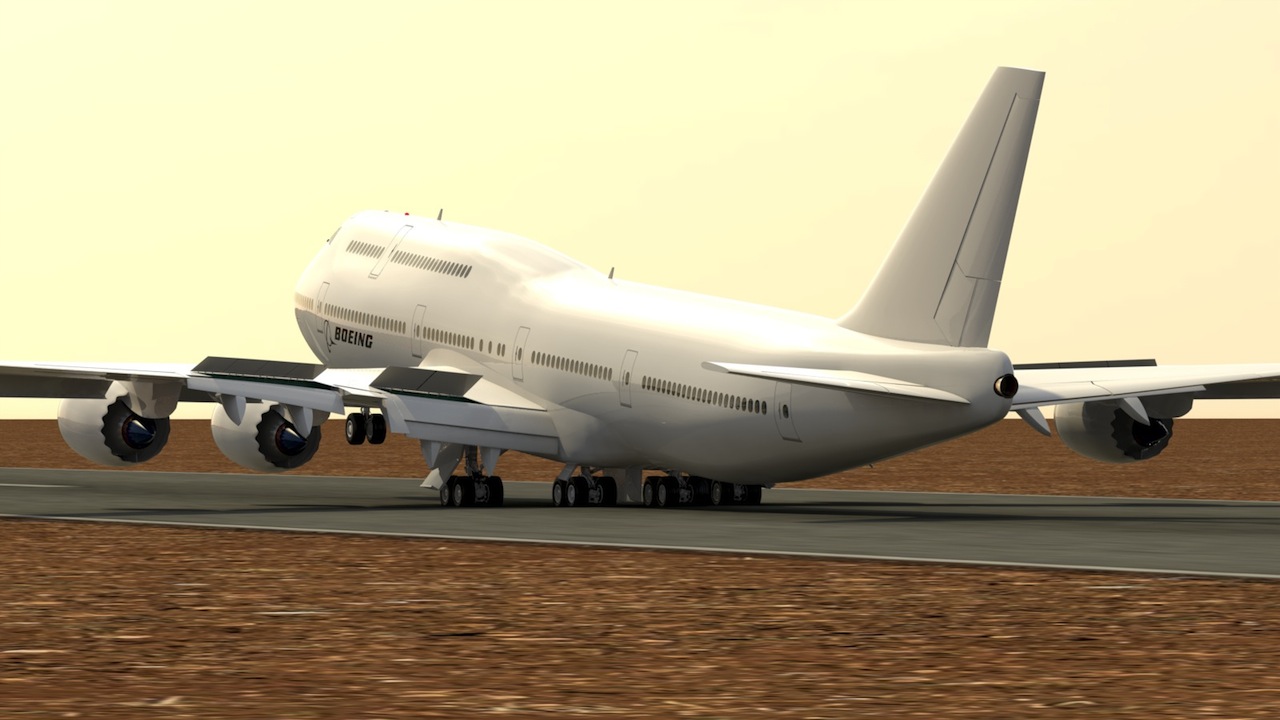 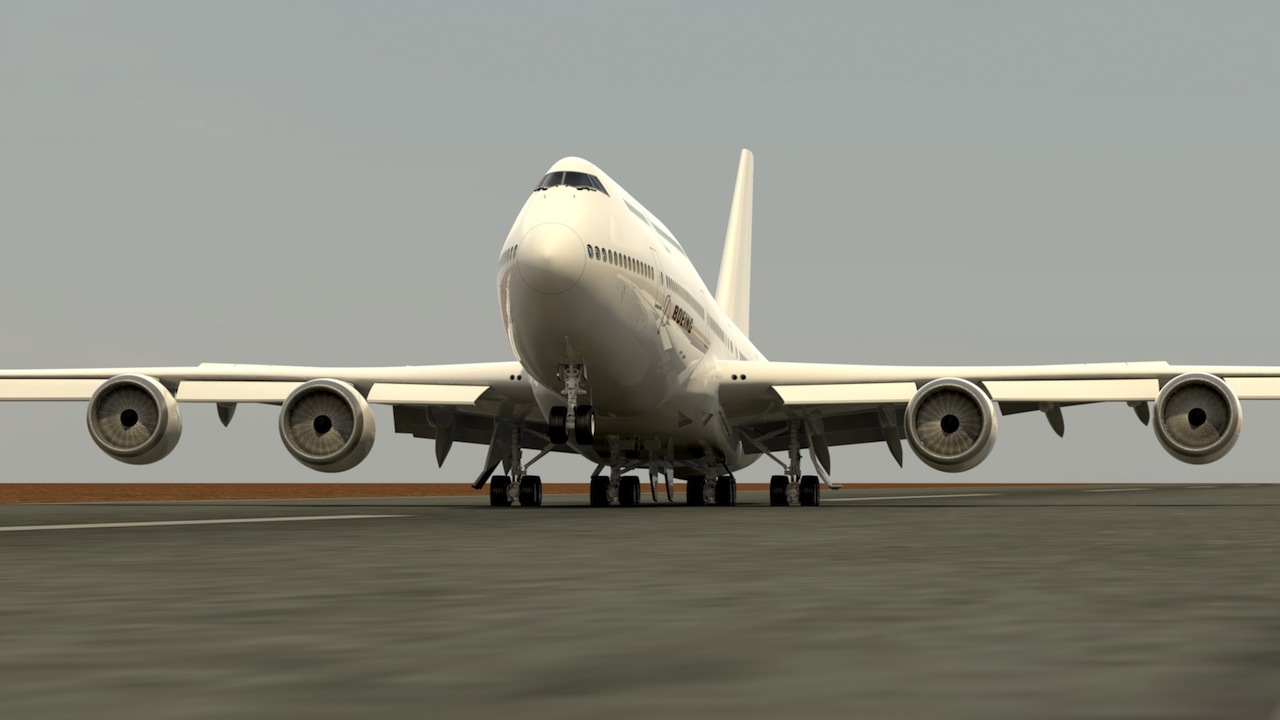 Below: I've used MODO's volumetric effects to try and replicate the smoke produced from the tires skidding on touchdown. 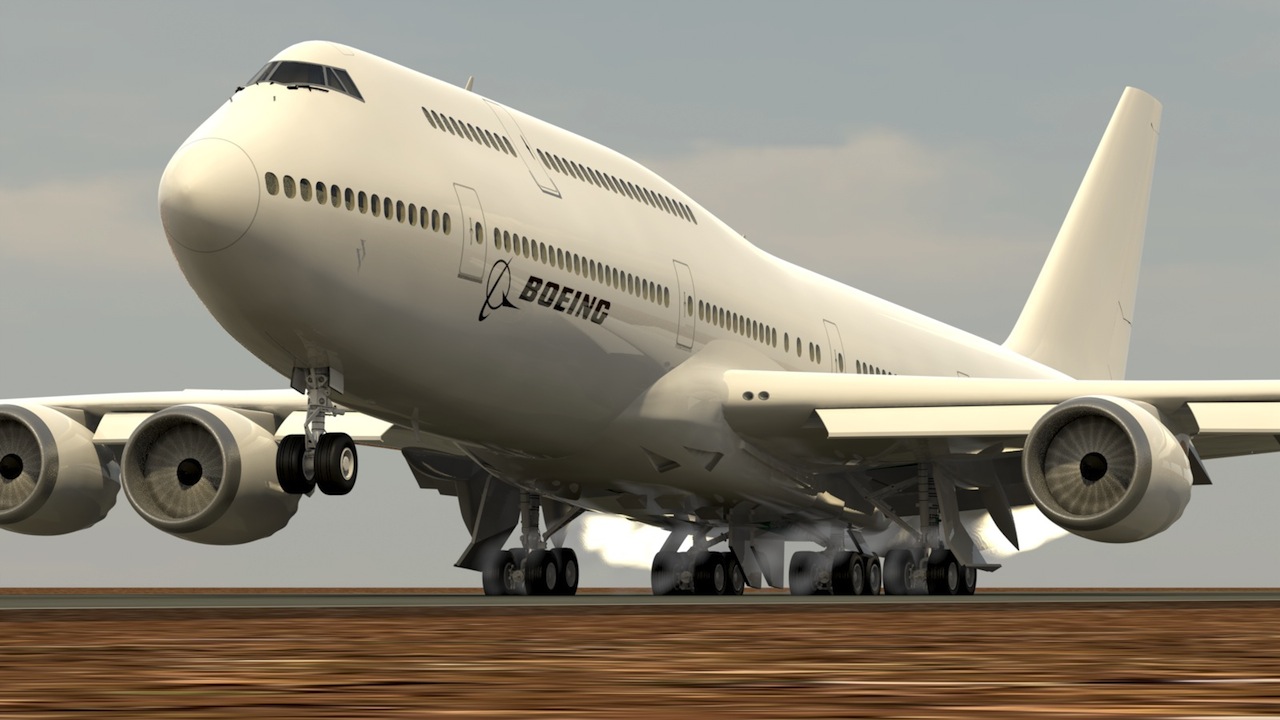 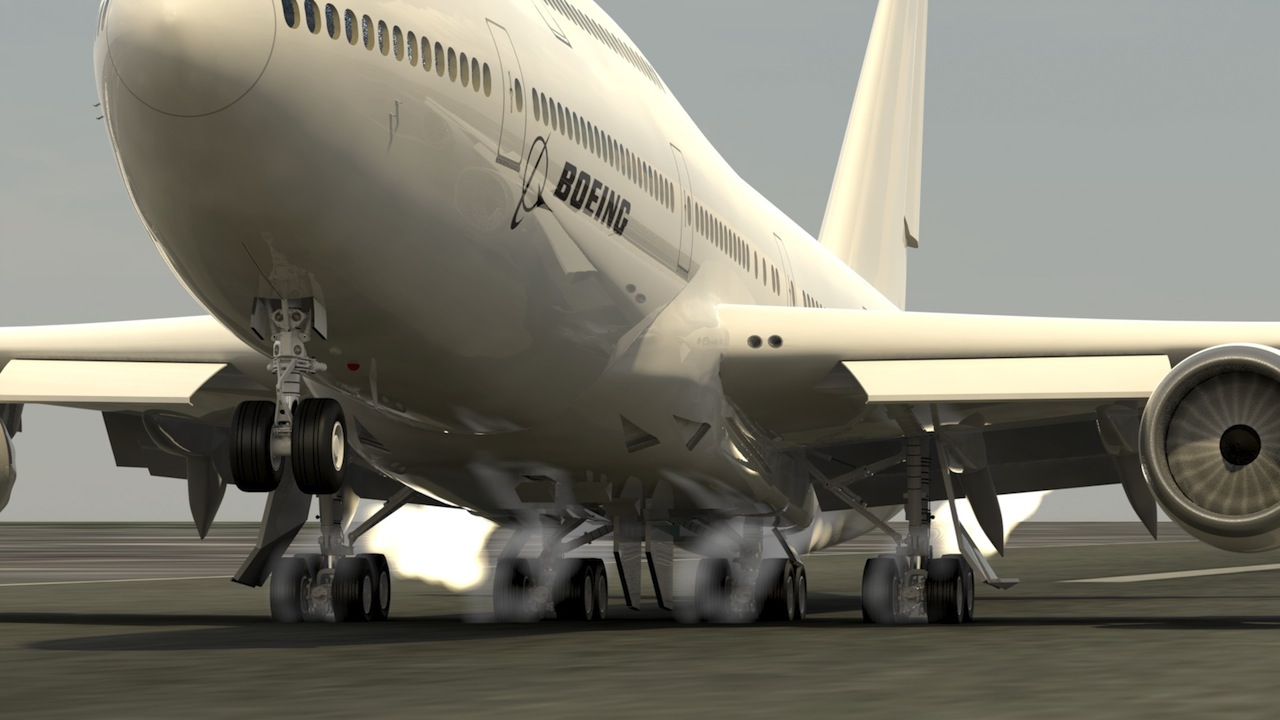 Below: Nose wheel steering in action. 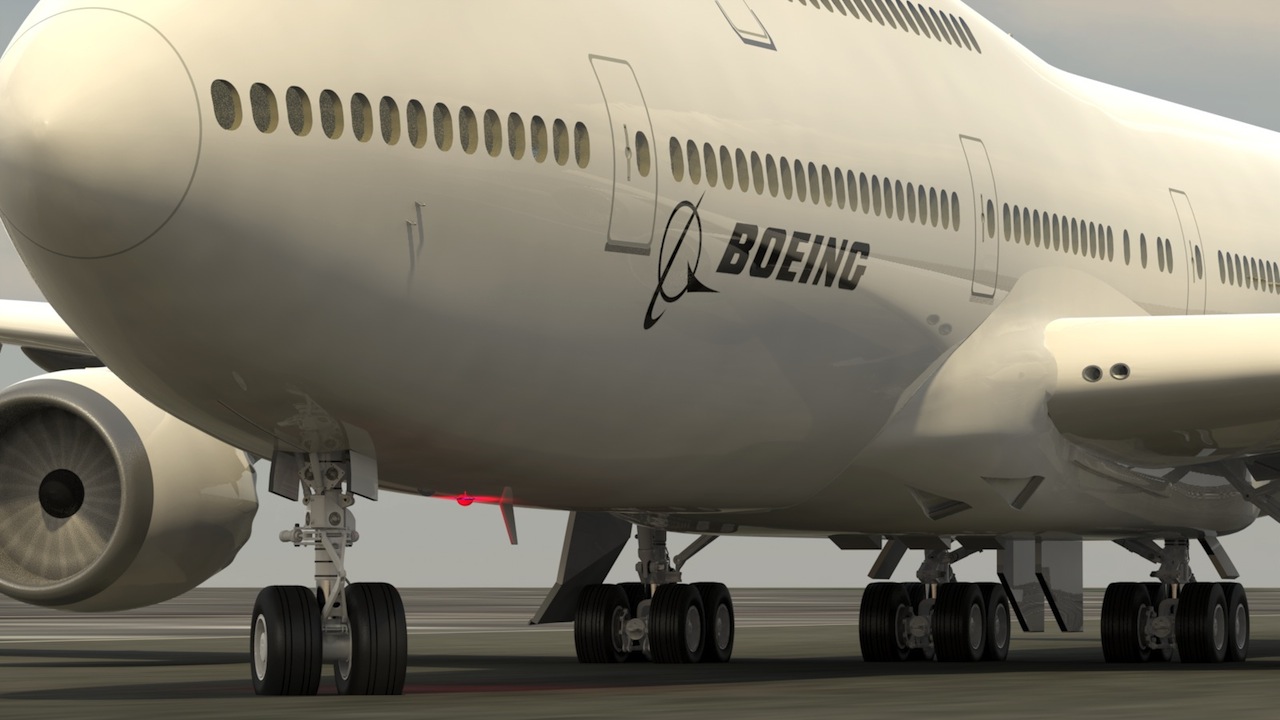 Below: For those of you who don't recognize it, this composite uses a photo of Boeing Field, in Seattle, where the actual aircraft was tested. 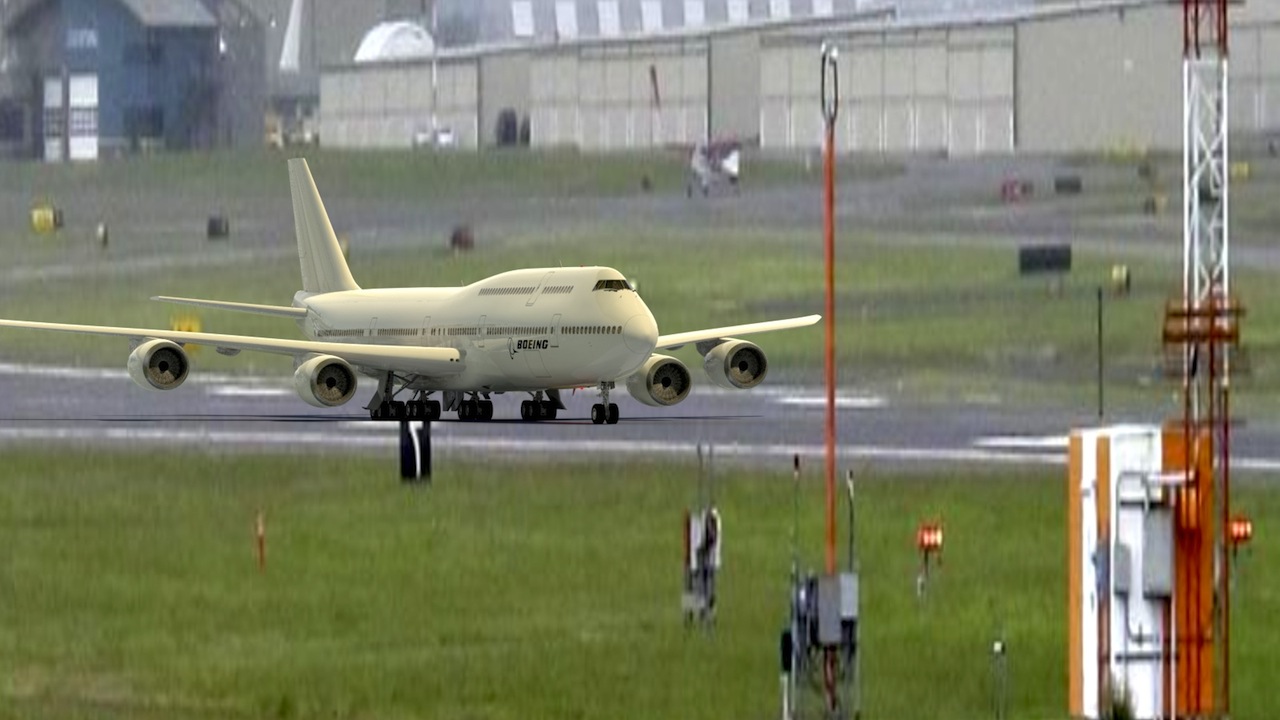 Bringing the rigging commands together

I'll continue adding external details, to the limit of my system resources, as this project moves along. At this point though, I wanted to finalize all the rigging controls for the exterior parts as much as possible, so that's my focus in the next several images. In addition to the items mentioned below, I've also added flashing red beacons on the top and bottom of the fuselage, red and green position lights and strobes in the wing tips, a strobe on the tail near the APU exhaust, landing lights in the roots of the wings, and of course, the landing and taxi lights mounted on the nose gear. These can all be turned on and off with the main controller, and you'll see these more clearly in future animations.

Considerable time was spent developing keyframes for the animation rig to make it more versatile. For example, the landing gear keys are placed so that, with a single slider, the aircraft could be posed or animated in all the takeoff and landing postures, as well as showing the correct gear retraction sequence. 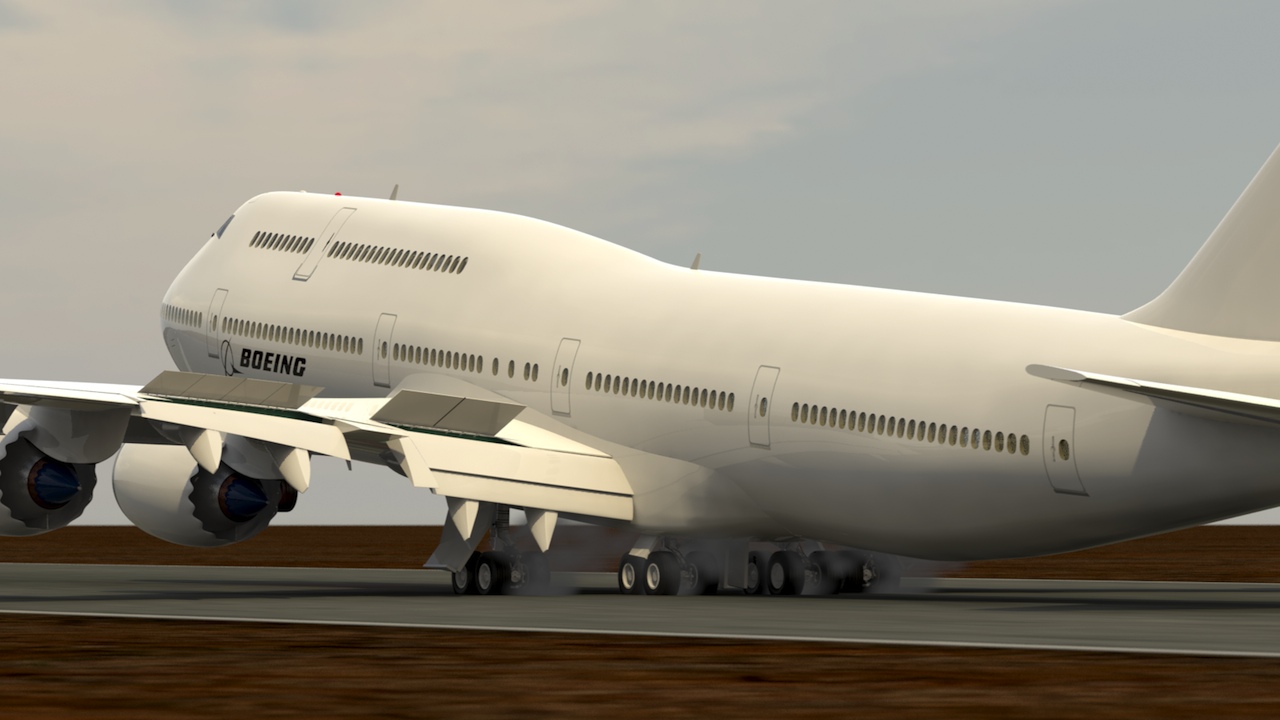 A few notes about both of the following videos...
First, disregard the clunkiness of some of the camera movements. I was working on positioning the aircraft, and the camera moves weren't tweaked too much, because I'm not saving these tests. Second, note that in real life, these takeoff and landing sequences take longer. So, some parts were shortened, just to save render times. These were output directly from OpenGL, in MODO.

First, a takeoff test. The small poles along the runway are spaced at 100-foot intervals, to help me judge the acceleration on takeoff, and deceleration on landing. (This is a 10,000 foot runway.)


Then, a landing test. (This was done before the reversers were added.)


After the tests, some refinements to the rig, and the volumetrics:

Volumetrics (a smoke-like effect, simulating engine exhaust) were used for several things here. First, they were used, as you've seen above, to produce puffs of smoke from the tires, on touchdown, produced from momentary skidding. Then, they were used to produce a very subtle exhaust stream from the engines. The rig is set up to slightly reduce the visibility of this exhaust stream, and turn on the reversed exhaust stream, when the reversers are activated. All of these streams are also spinning around their Z (length) axis, so that with motion blur turned on in later animations, it will be more realistic. 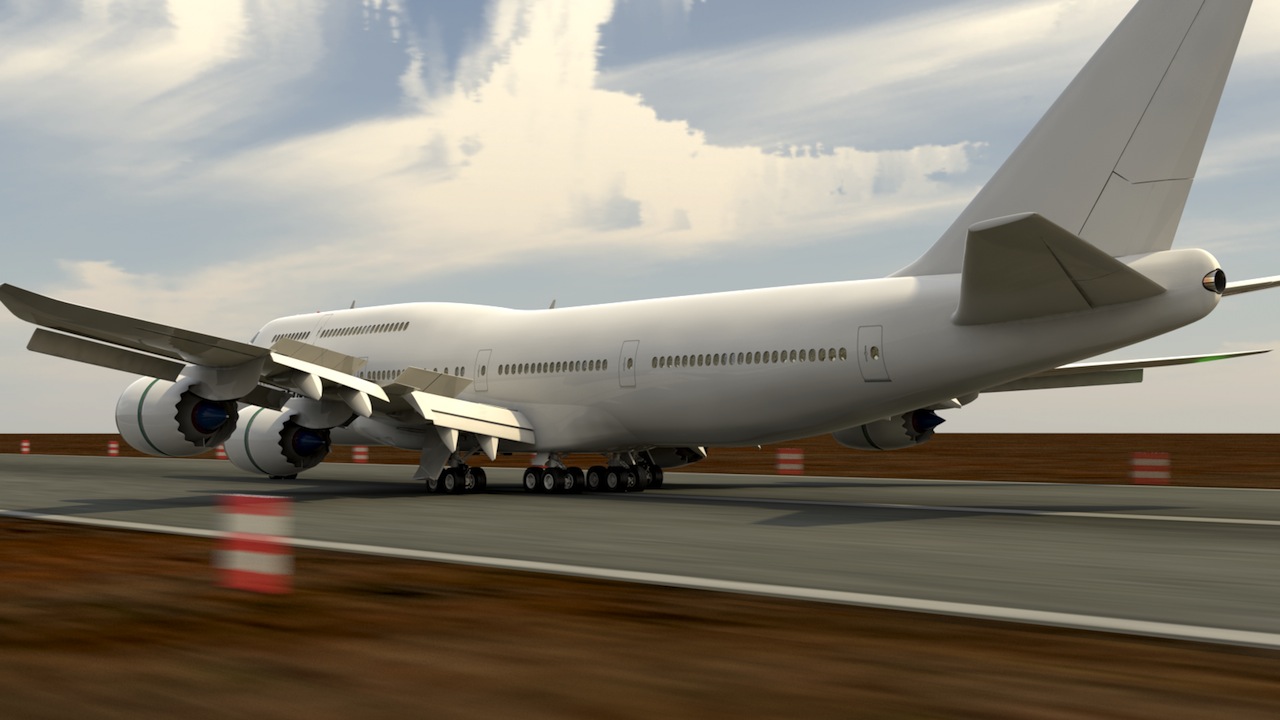 Below, a test of the volumetric effect on the thrust reversers. Normally, you wouldn't see any exhaust "smoke" like this, on the actual aircraft, unless it was a very wet day, so I'll tone this down a bit for the final animations. It uses vertex-based "sculpted volumes" in MODO, combined with a spinning (z axis) effect, to blur it further. The controller for this rig moves the aft portion of the nacelle rearward, and as it moves, it uses (in reverse) MODO's "dissolve" function to make the exhaust appear. As the reversers close, the reverser exhaust fades out, and the normal rearward exhaust stream comes back to it's original strength. 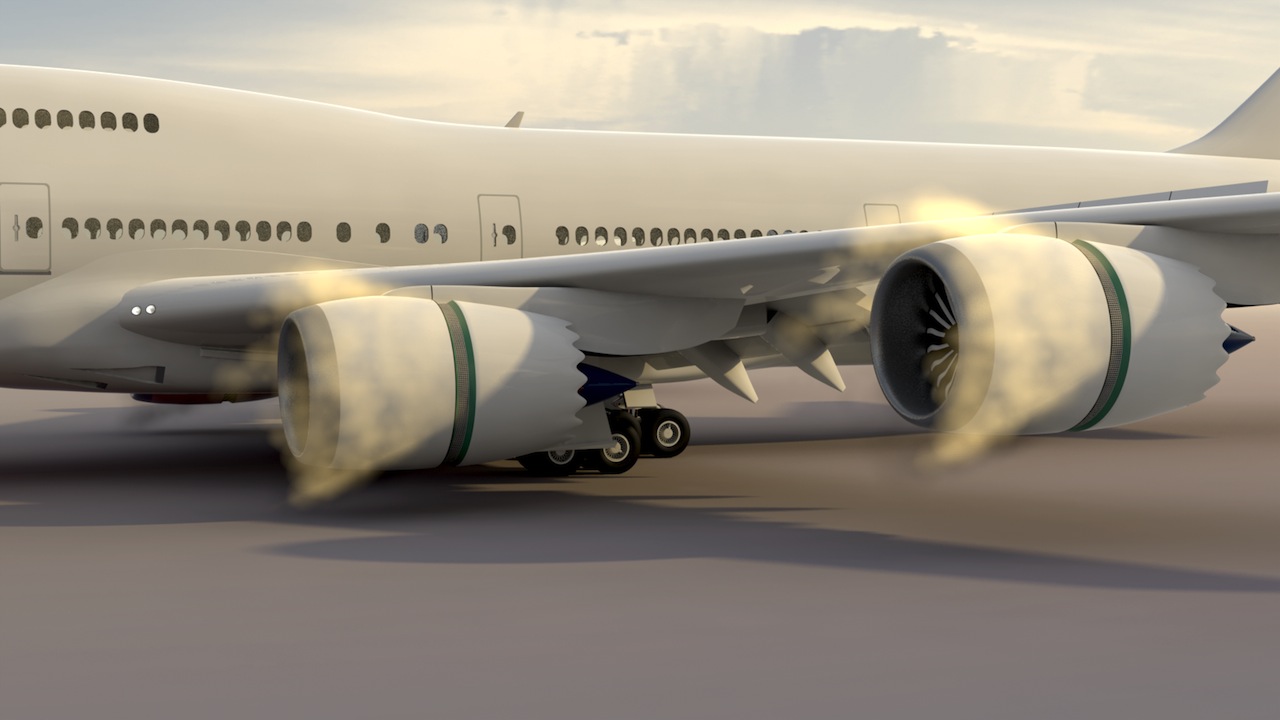 The next two images show the sequence for landing. On touchdown, exhaust is coming from the engines normally. Then, as the reversers open, the rearward exhaust is reduced a little, and the speed brakes (spoilers) open. All eighteen of the tires are now rolling realistically, too, thanks to MODO's "revolve" modifier. 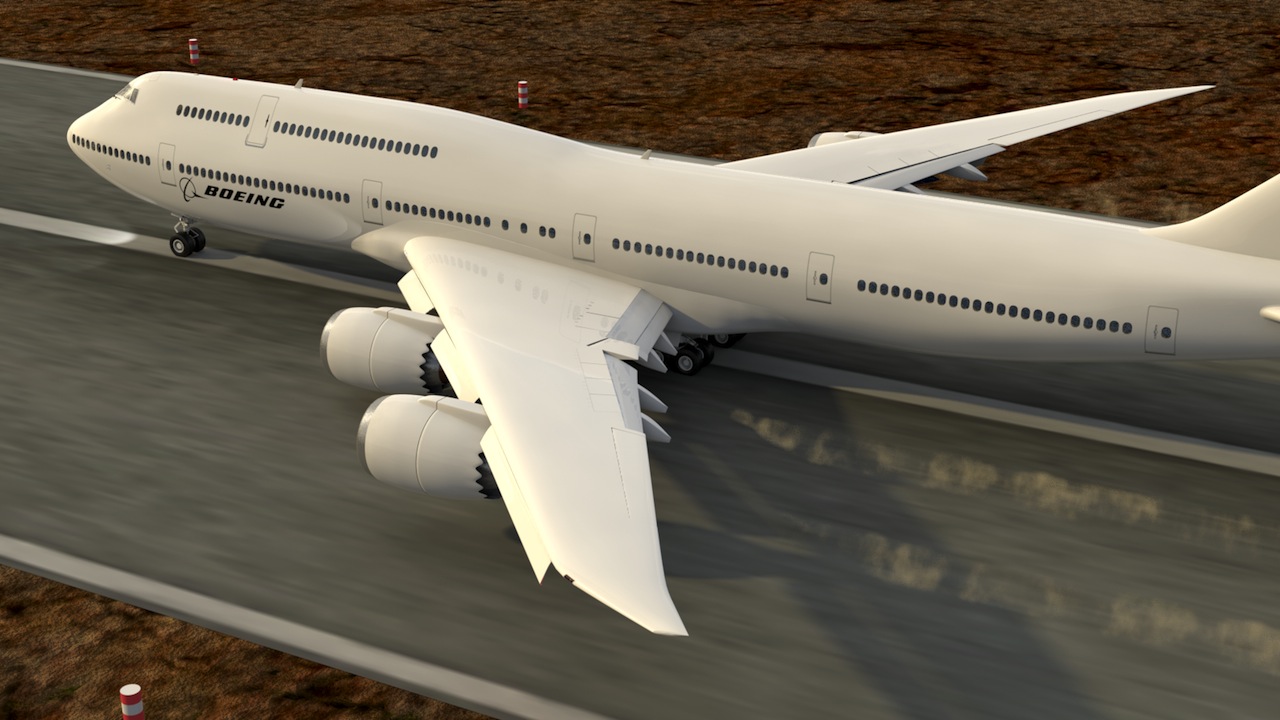 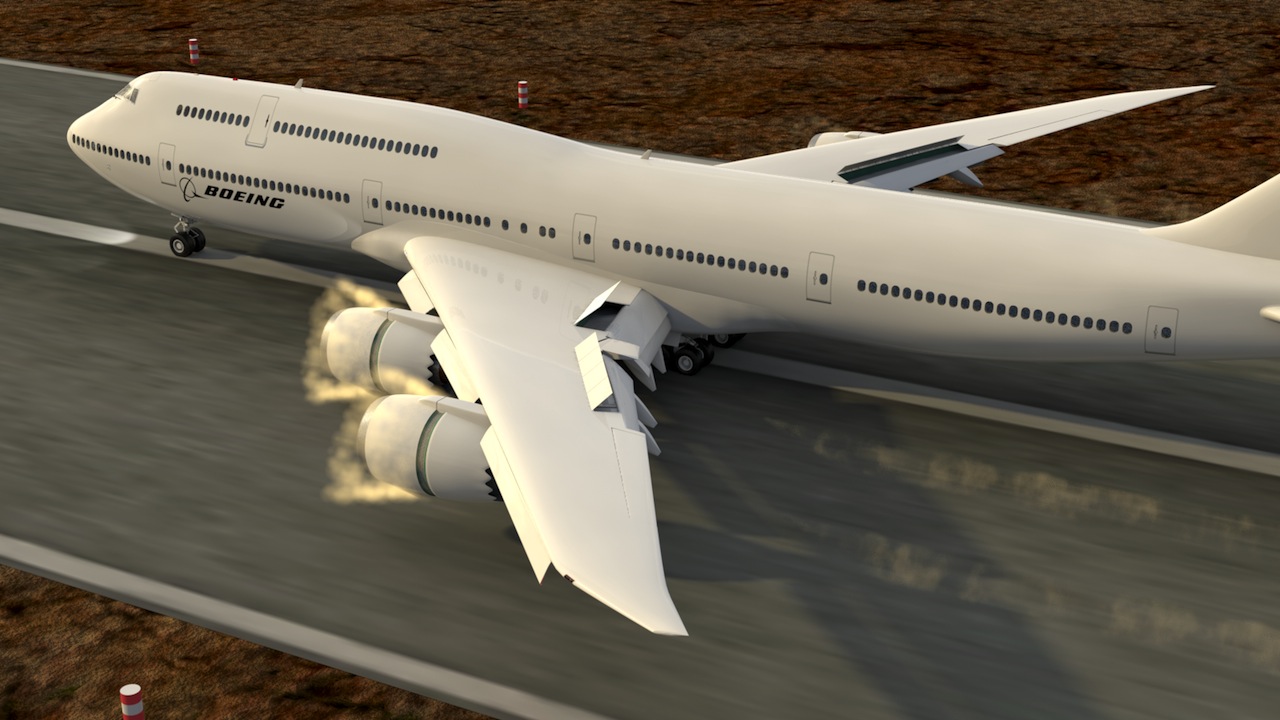