Further details on this model's construction are included on my "Modeling with MODO, Volume One" .

This model is available in my 3D Catalog. 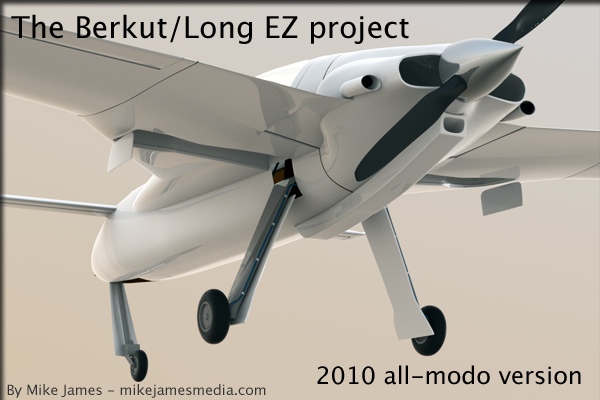 Burt Rutan's designs stand the test of time, and this aircraft is one of the more impressive examples. The Long EZ has been a popular homebuilt aircraft for many years, and has spawned a huge number of variants, from other small homebuilt types, to large, jet-powered types. The "Berkut" is a high performance variant of that design, and an interesting subject to model, so it was worthy of being rebuilt in MODO.

In about 2002, I built a 3D model of this aircraft in "Carrara", and also built a 1/3rd scale flying model, which was later used in some tests related to the Air Force's airborne laser project. ("MTHEL") You can view the previous article on my (NextCraft.com) archive site, at http://www.nextcraft.com/berkut01.html. This update, rebuilt entirely in MODO, is both more accurate and more detailed. The Berkut variant includes retractable main landing gear, and so that made it more interesting to model, too. (I'll add some Long EZ-style main landing gear later, for those who prefer that version. Otherwise, the two aircraft are very similar in their exterior shape.

There are a variety of ways to model things in MODO. I generally use a combination of hard poly modeling and subdivision surface modeling. In this case, I chose to build the fuselage, canopy, and engine cowling, using spline cages. It's a method that gives the ability to re-model the subject quickly, at various mesh densities, among other advantages. The image below shows the project at the start, with the engine cowling spline cage highlighted. I have the original drawings from Berkut Engineering for reference items. (Modelers: I promised not to redistribute these drawings.) If you're not familiar with spline cages, check out this movie, which is a preview from "Modeling with MODO, Volume One". (34.5 MB MP4) 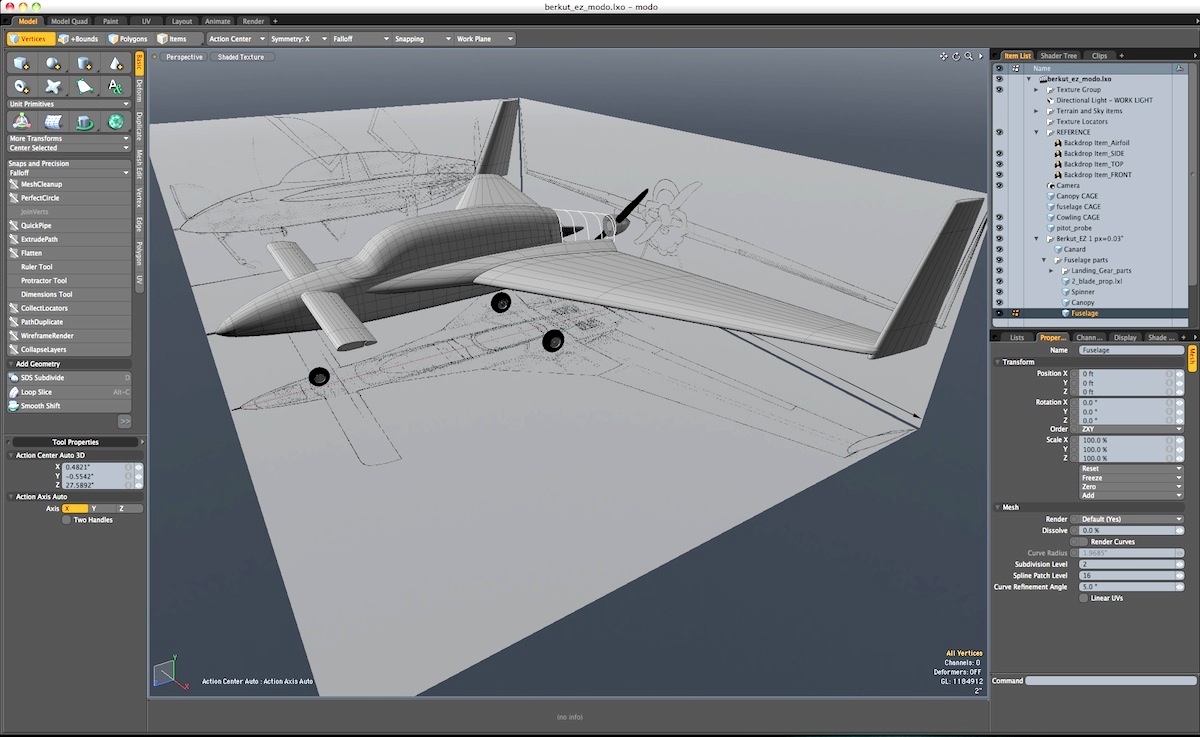 Since I already had the airfoil data from my previous research, I quickly built some stand-in parts representing the wings, wingtip rudders, and canard, to help visualize the overall shape. (Control surfaces were cut out later.) So immediately, I had a reasonable shape for the aircraft. I also placed some wheels in their proper "down" position. Although the engine cowling is connected to the wings later, I chose to model it separately at first, (using spline cages) to get all the compound curves right. This enabled me to get a smooth shape from nose to tail to start, then separate and join the parts later. 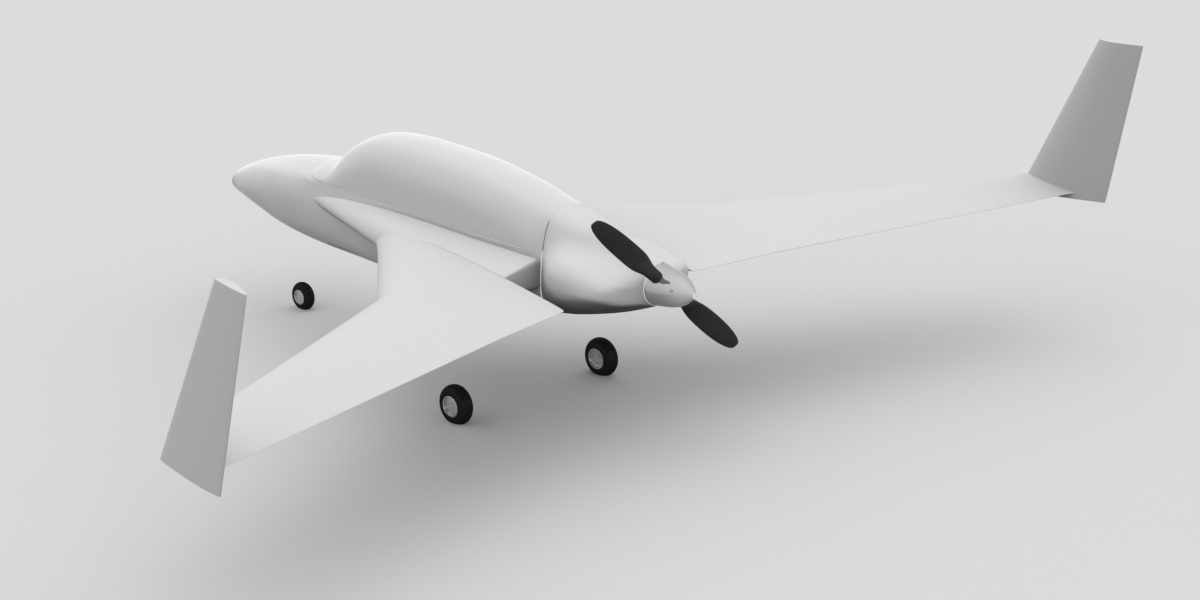 Once the shapes were close, I cut out the control surfaces, added some exhaust pipes and fairings on the cowling, and started to work on the landing gear details. 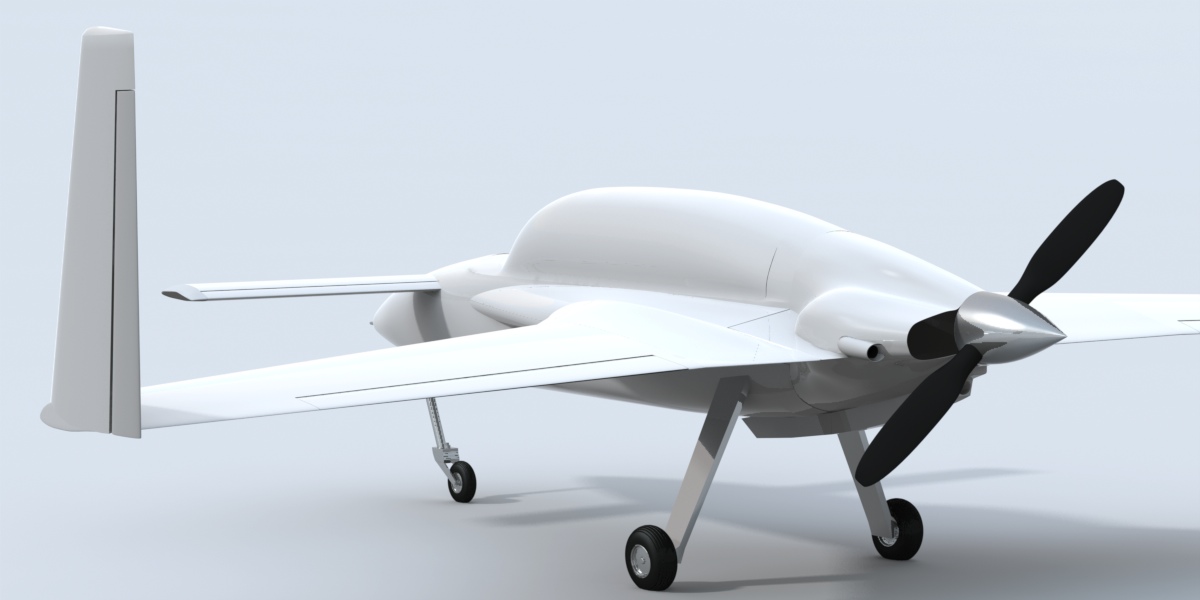 Here's a closeup of the nose gear and wheel, which is free-castering, on the actual aircraft. (like a shopping cart wheel) 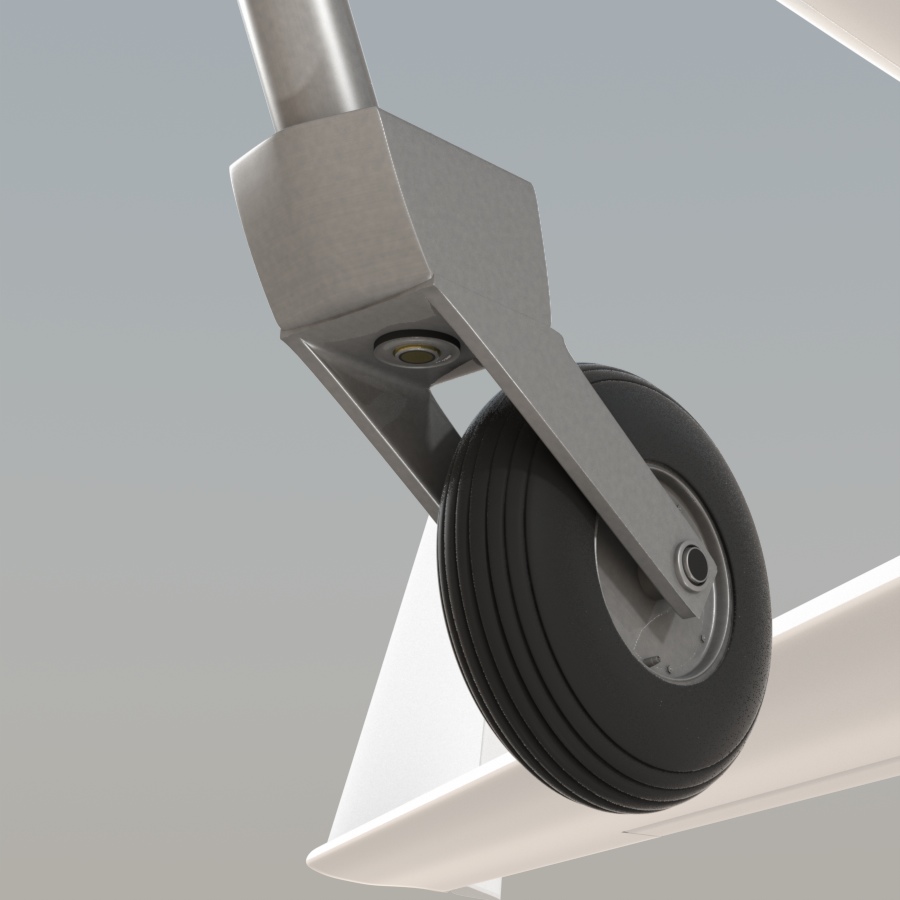 The main gear…
The main landing gear on the Berkut is unique. Some of these struts were made of metal, and some from fiberglass/carbon fiber. I chose the metal version, but since that's only a texture in MODO, it can be changed at any time, And, thanks to MODO's "renderable curves", I was able to create some good-looking brake lines for the main landing gear. 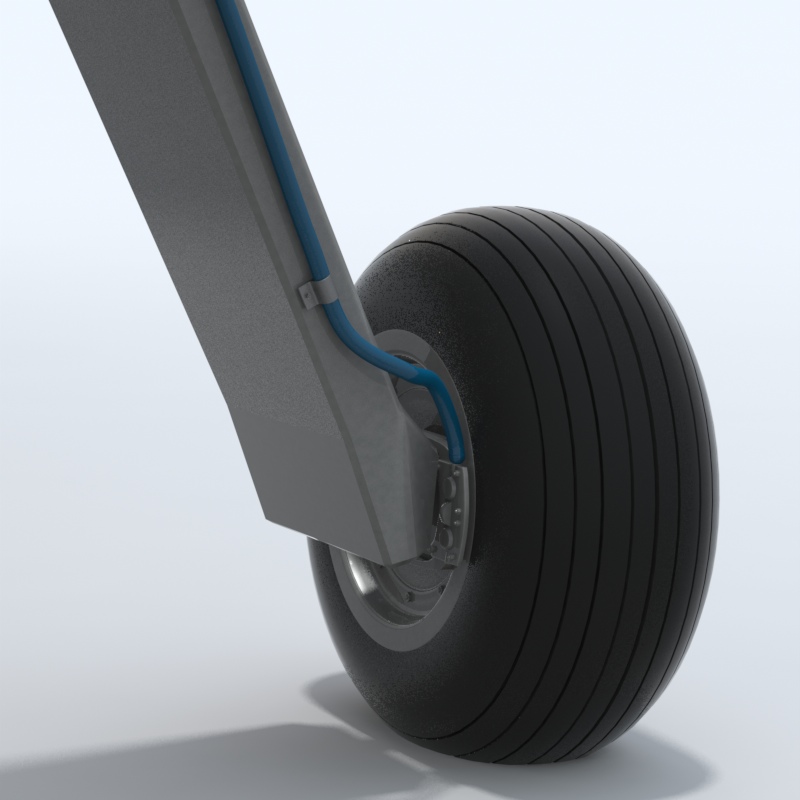