As part of my "2013/2014 Rebuild/Up-Res" project, I've rebuilt this engine from scratch, with the hope of making it more accurate, as well as animatable. MODO users may be interested to know that unlike the first version, which was all hard polygons, this version is almost entirely "Psubs" with edge weighting. This gave me a tremendous amount of control over various items, which I'll point out as the article moves along.

NOTE: The images shown here are force-fit into the browser window, but the renders of the new version are actually much larger. (typically, 1920 X 1080) So, if you drag them to your desktop, you can see them in higher resolution.


A quick review of the original model and the methods used, for comparison:

I did the original Genx model back in 2010, with less documentation, a simpler computer, and (obviously) an earlier version of MODO. Considering the circumstances, I'm pleased with the results, but as you'll see, hardware and software improvements, along with better documentation, have enabled some great improvements.

There are two main differences in the construction methods used then and now. Back then, we didn't have "Psubs" (Pixar subdivision surfaces) in MODO. And, my goal was different, due to a concern with system resources. As you'll see in the video and sample renders below, my concern was simply to "portray the geometry", and with the documentation I had then, I really couldn't differentiate between all the separate components, so many things that should have been separate ended up being built as a single mesh. To save system resources, all the interior parts were built with single-wall (infinitely-thin) surfaces, and using hard polygons. This cut my file size to at least half of what it would've been otherwise.

A brief video, explaining construction methods I used on the original GEnx model


Still, the results weren't bad, and do accomplish the goal of showing what a jet engine looks like, albeit in relatively-simple form. If you're familiar with this engine, you might notice one of the most glaring errors, which is that, due to a mixture of documentation that included the "2B" version of the engine, (used on the Boeing 747-8) I have too many blades on the main fan, and they're set to rotate in the opposite direction. 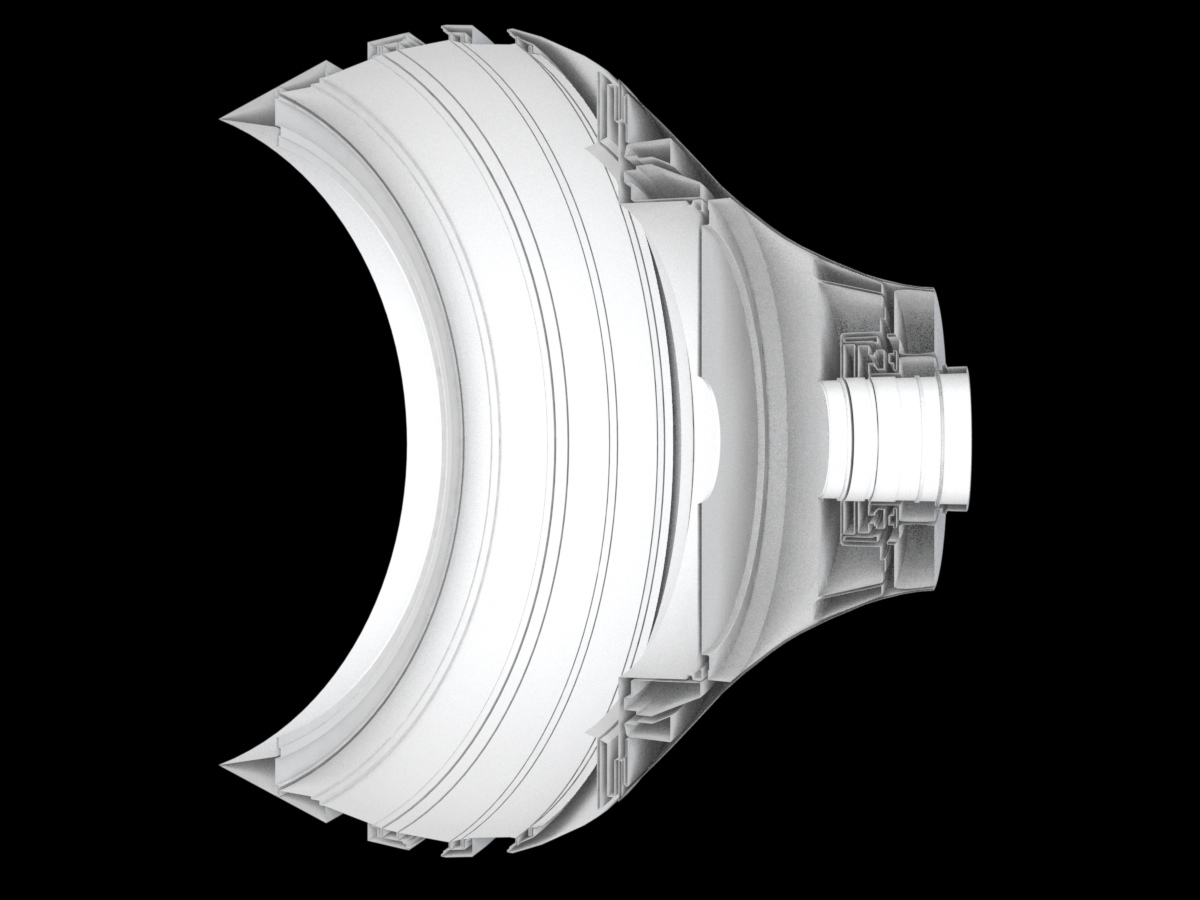 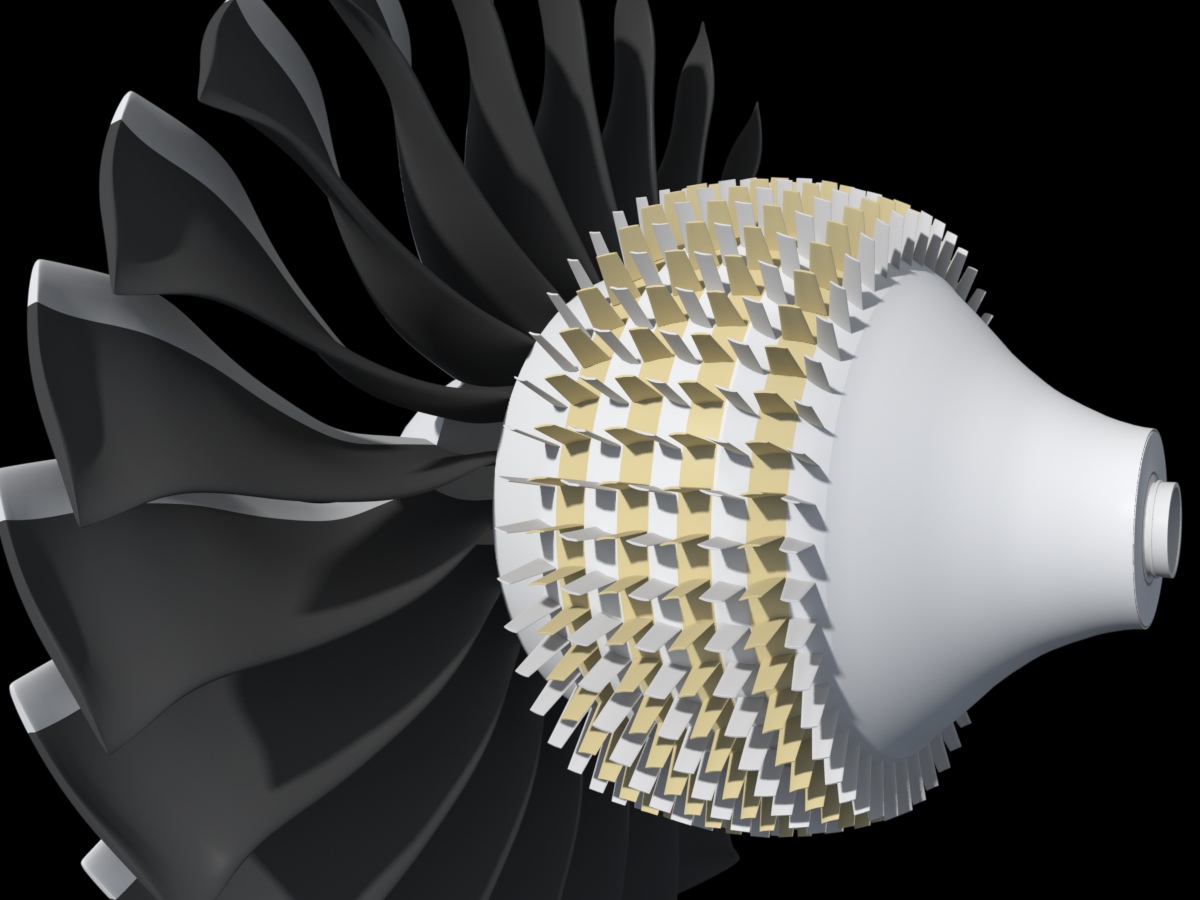 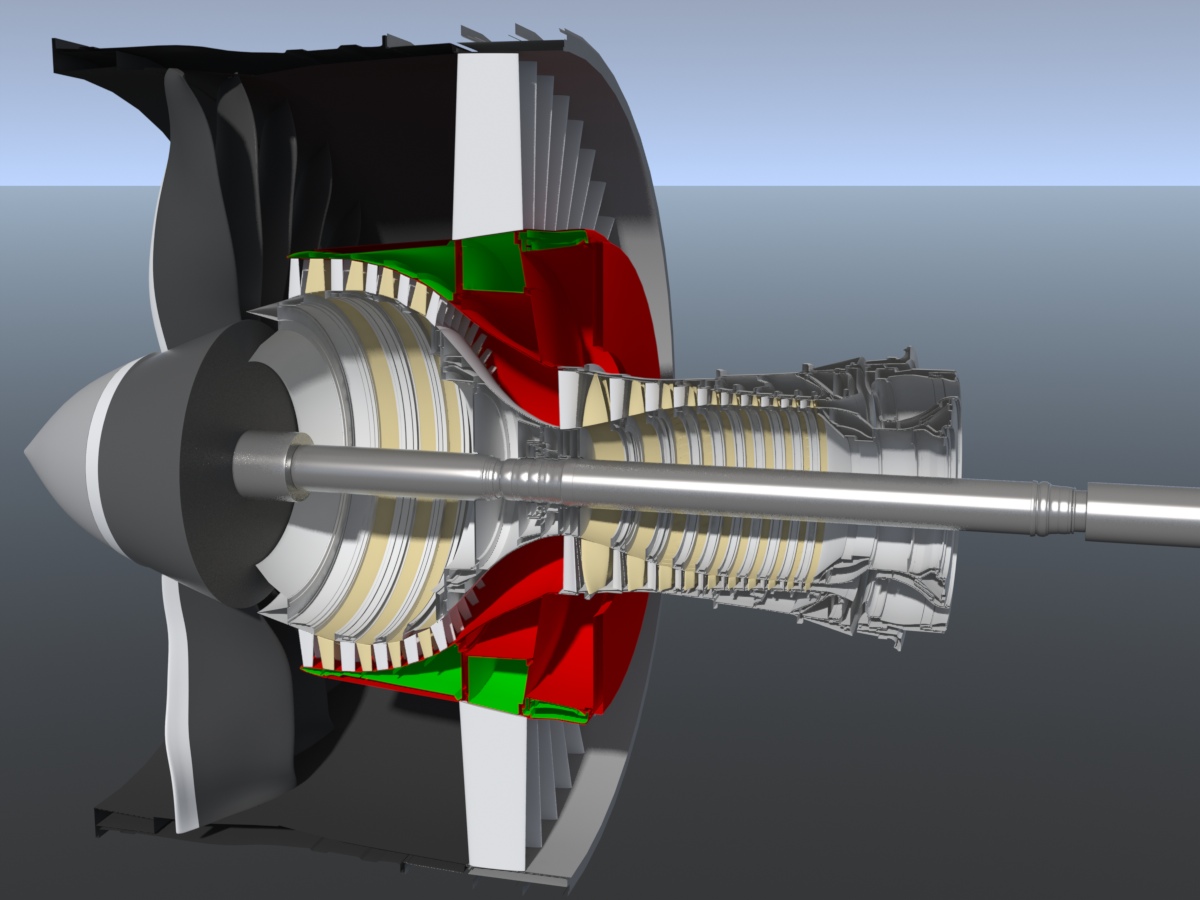 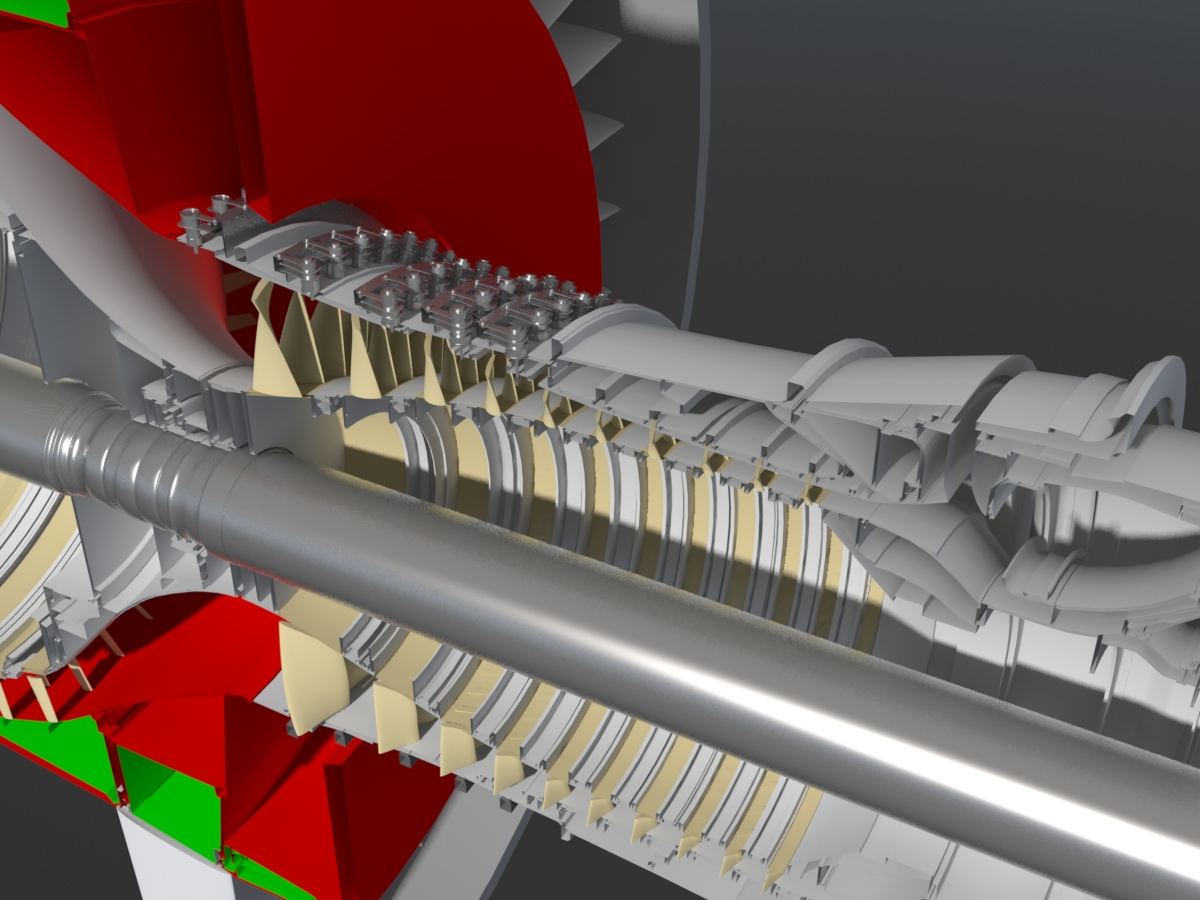 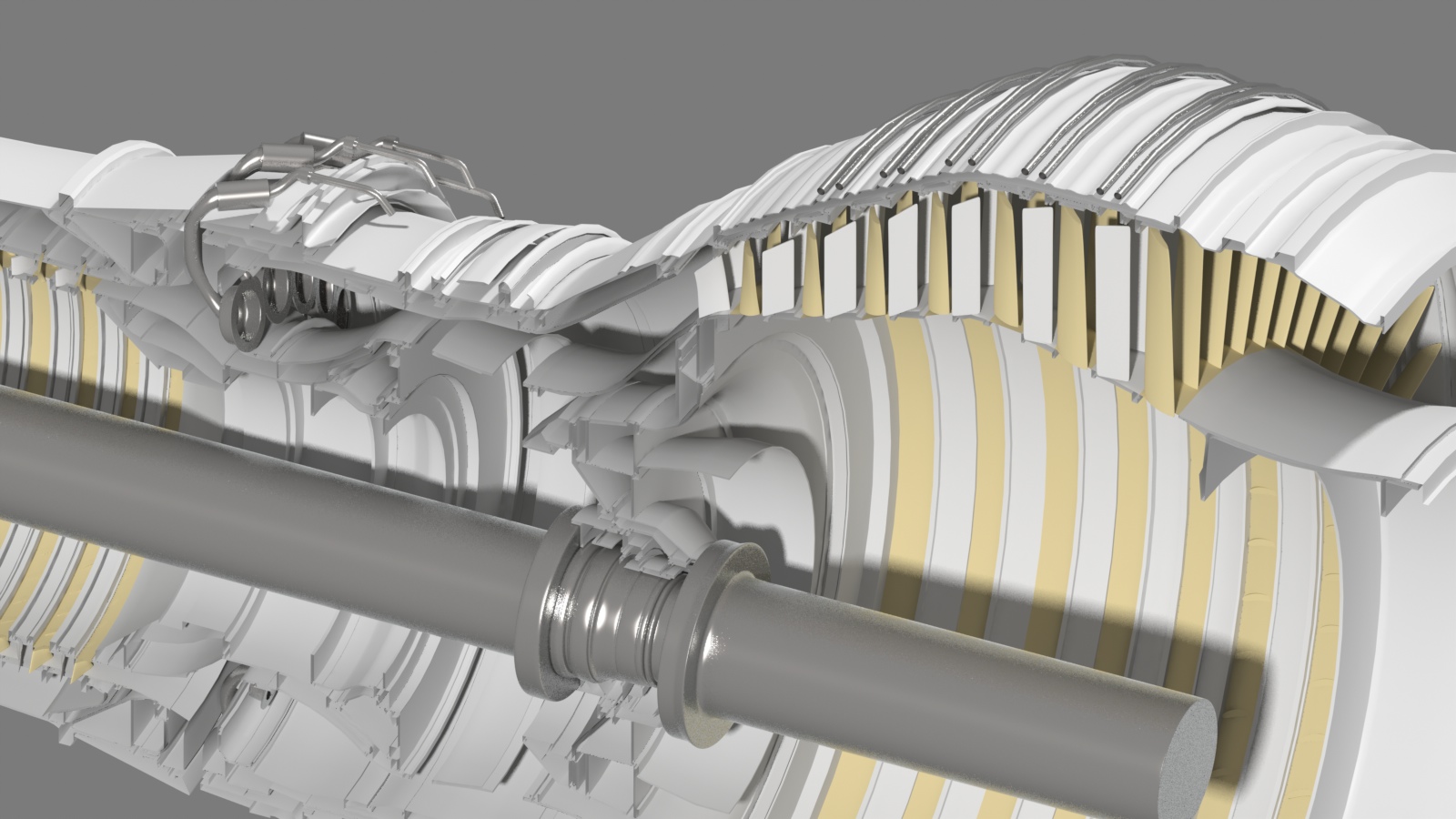 When we got controllable volumetrics in MODO, the first thing I did was create some cutaway images of the engine mounted on my Boeing 787-8 "Dreamliner" model. 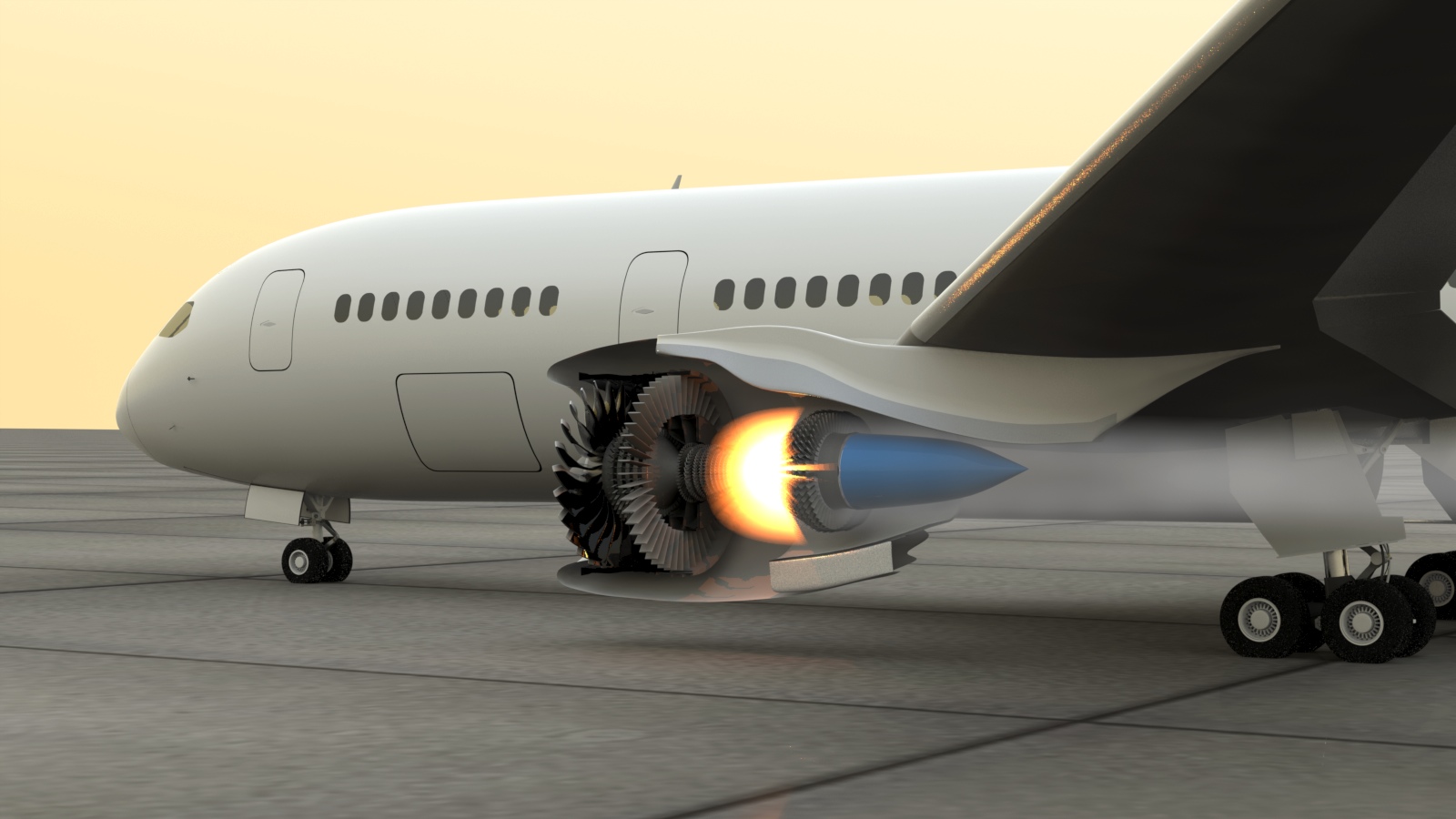 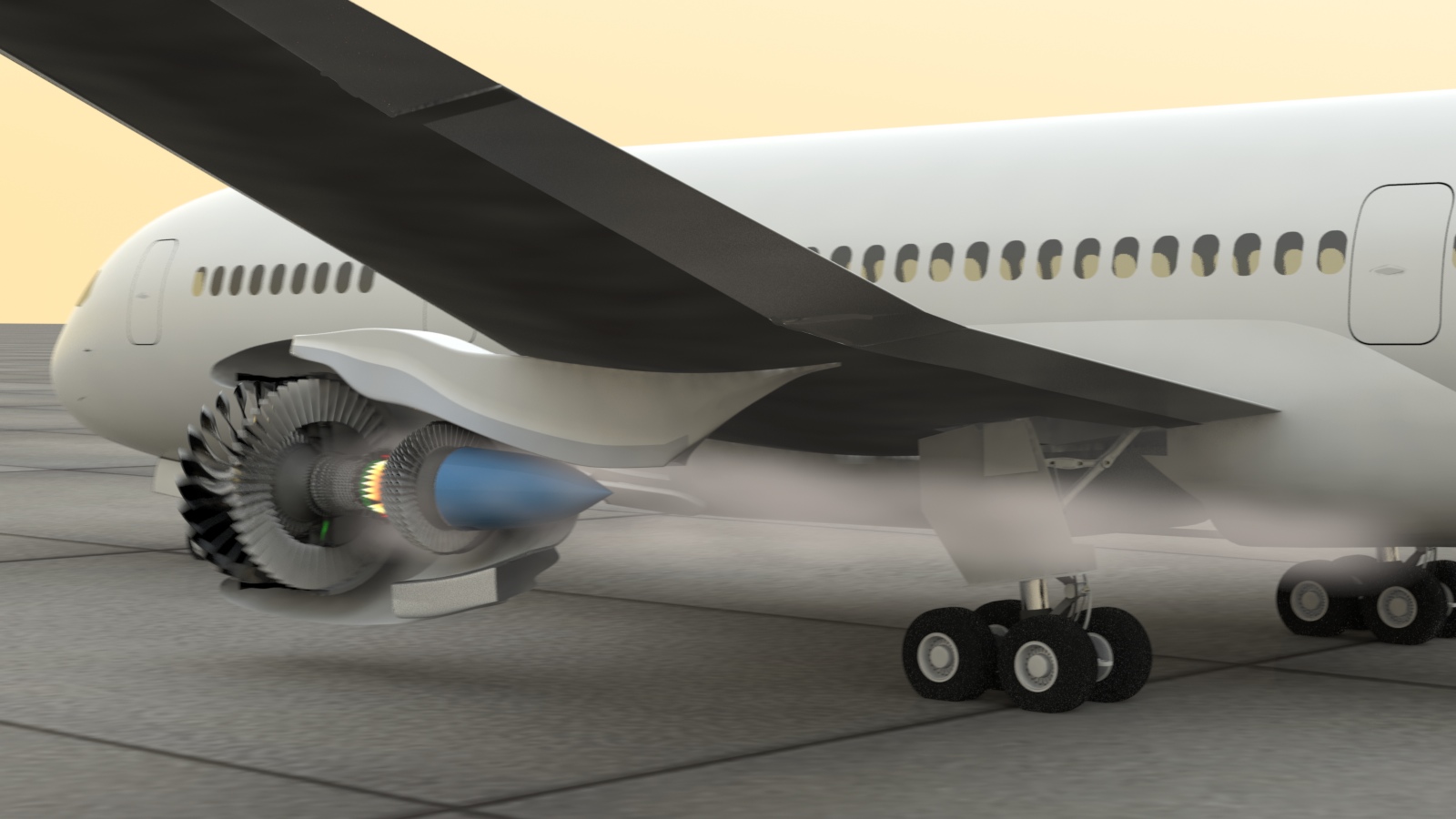 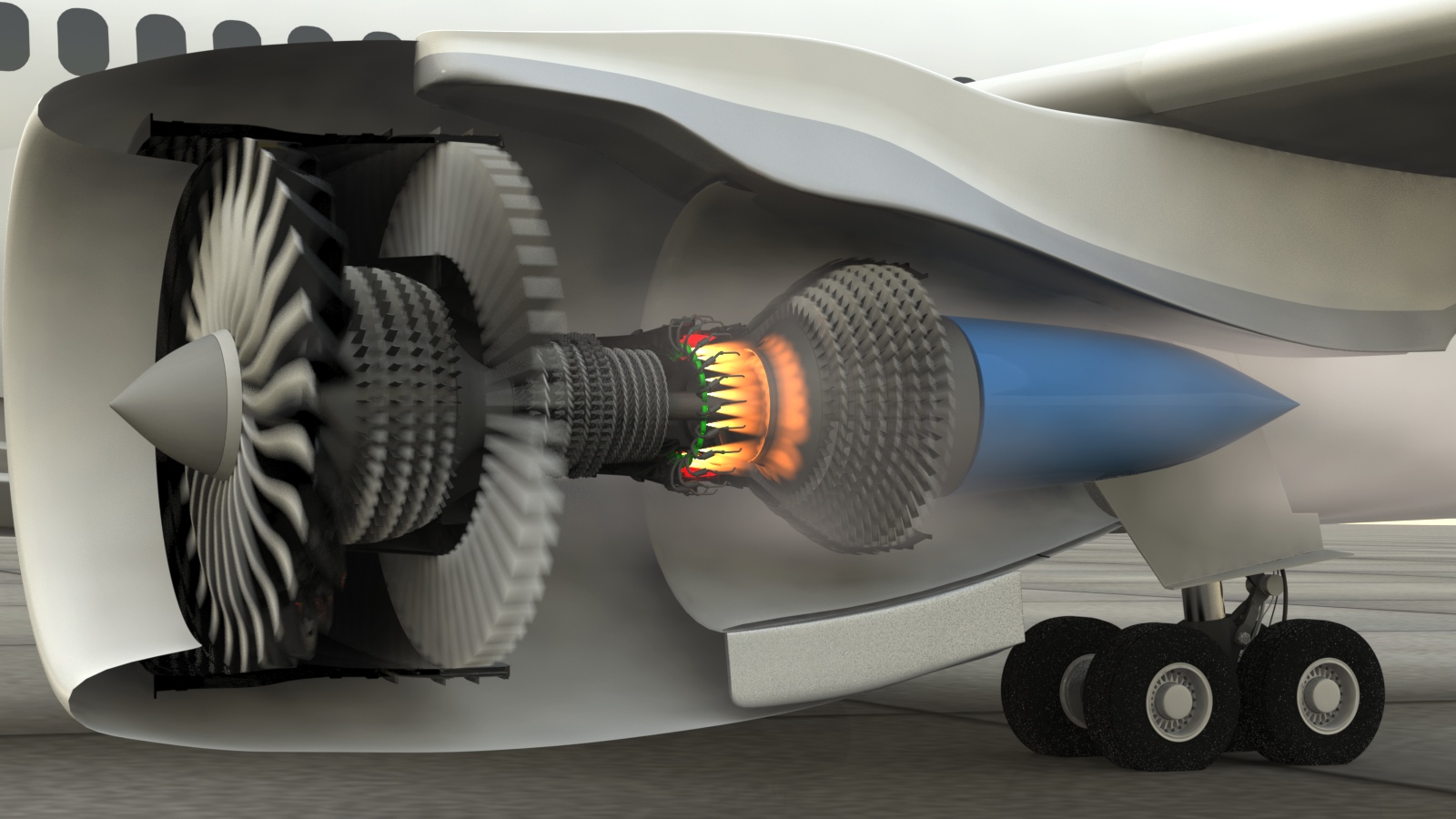 This is a high-quality, hardcover book, presenting a thorough history of turbine power, and I'm happy to have an image of mine included. Thank you, Andreas!


The motivation to re-do this project:

In August of 2013, I spent more time working on the engine, along with some refining of my 787-8 model, for a British ad agency who is doing some animations for a British airline. As soon as we're out of NDA, I'll post some of those images here too. In the meantime, since I can't show the color scheme I used for that project, I've decided to create a whimsical one, as though this was my private jet. Here are a few renders, which include the "final" version of the previous GEnx model. Here, most of the improvements were to the exterior engine cowling and main fan blades. 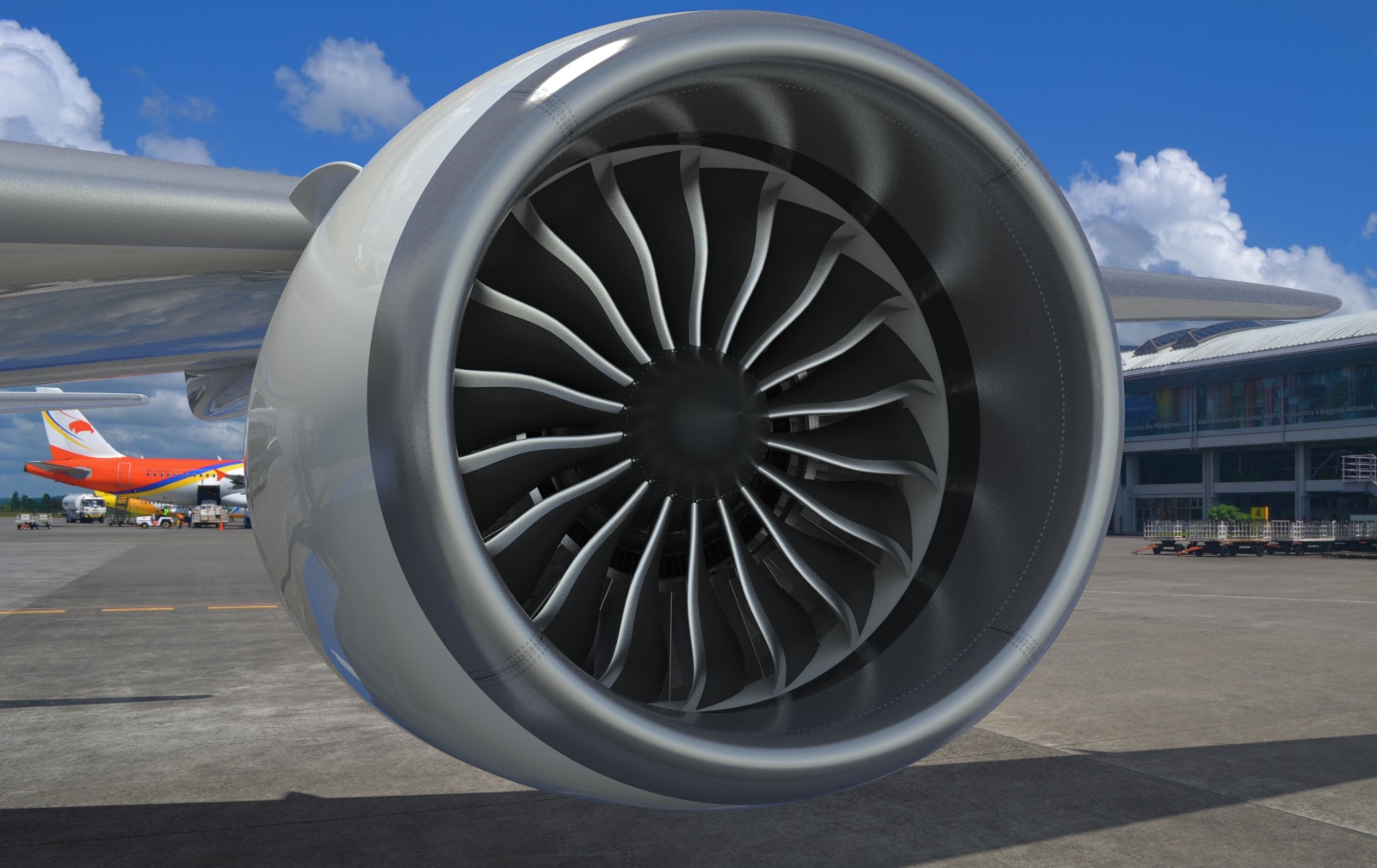 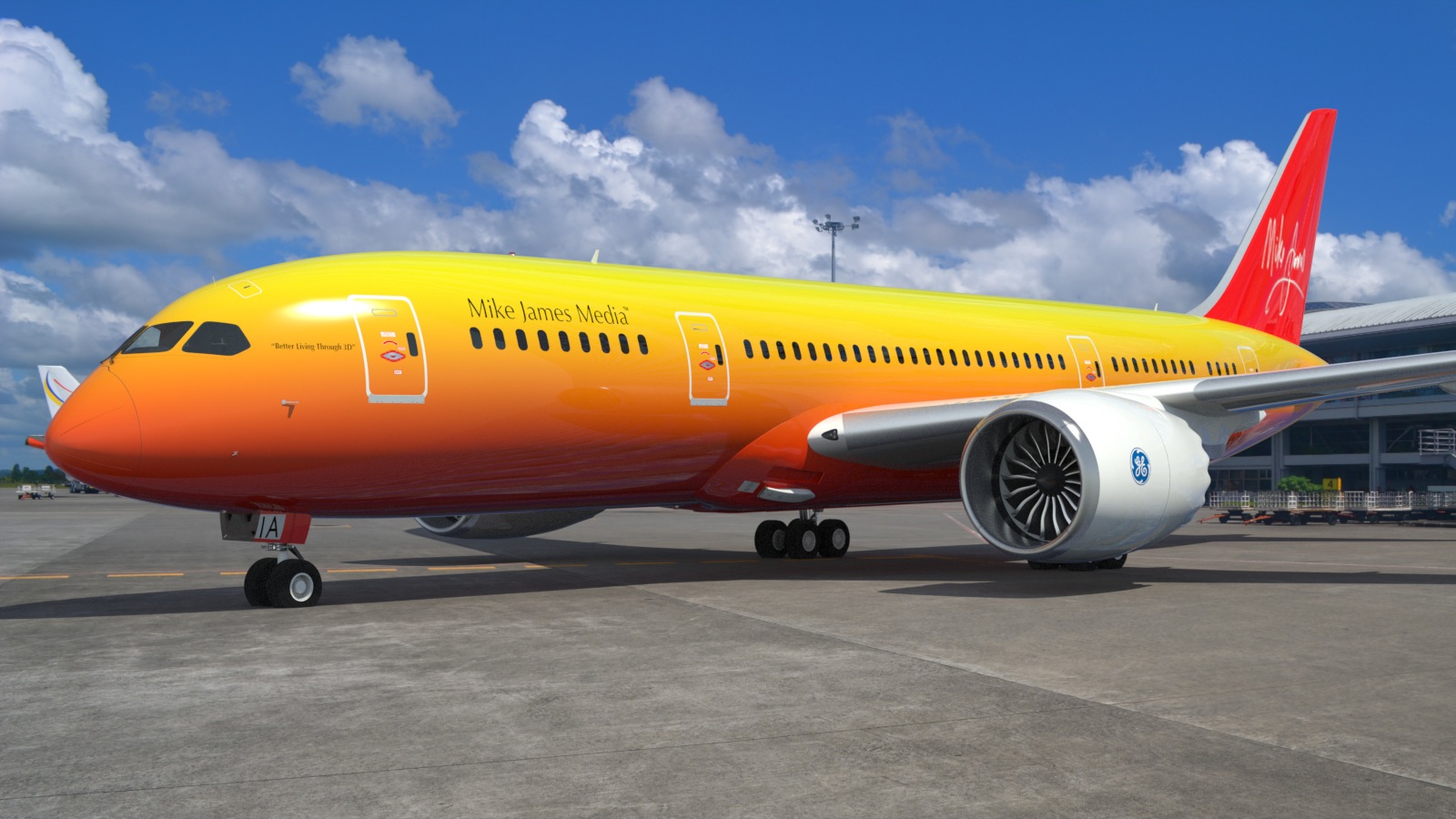 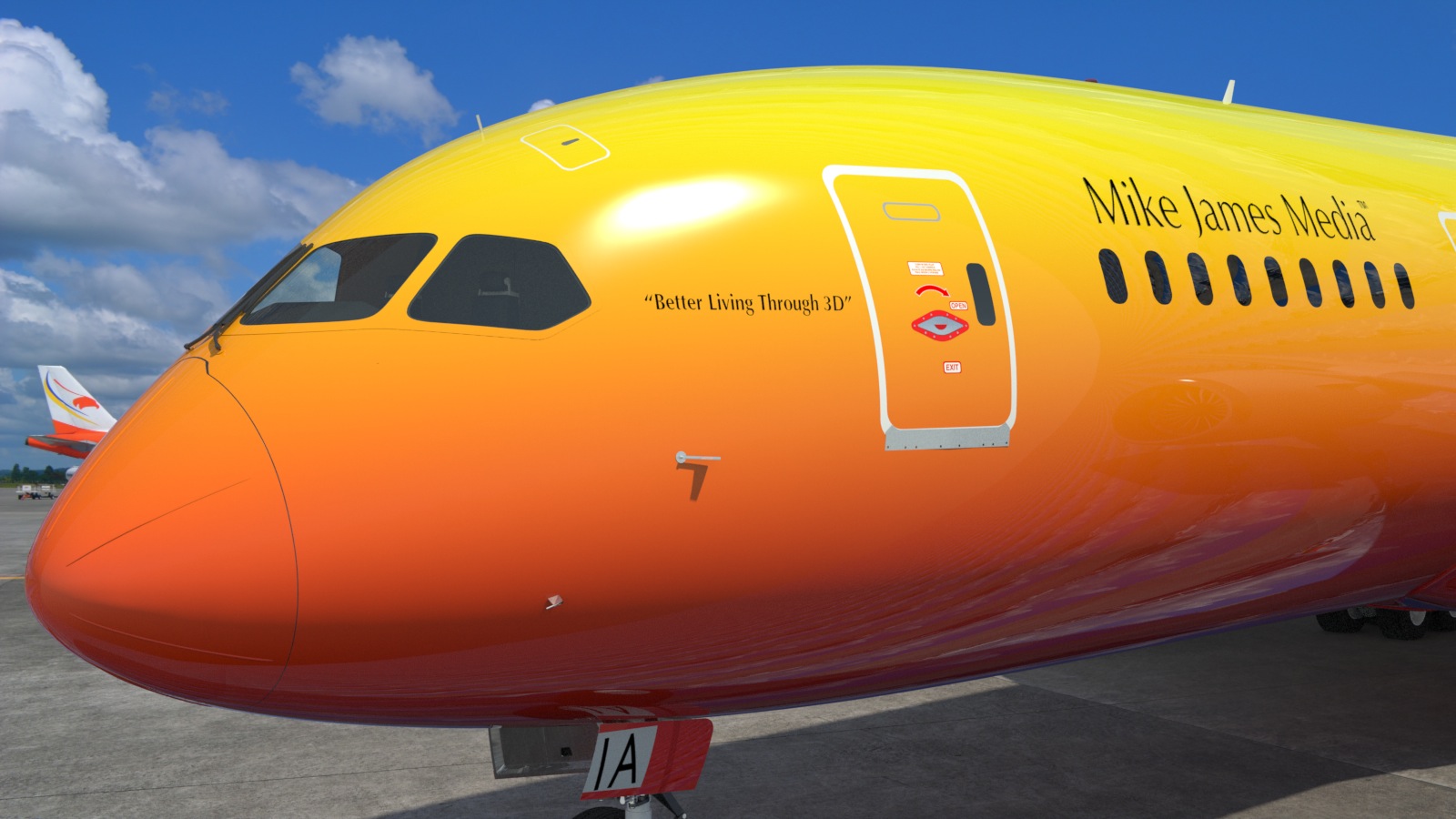 Volumetric lights were used to simulate the combustion in the engine here. 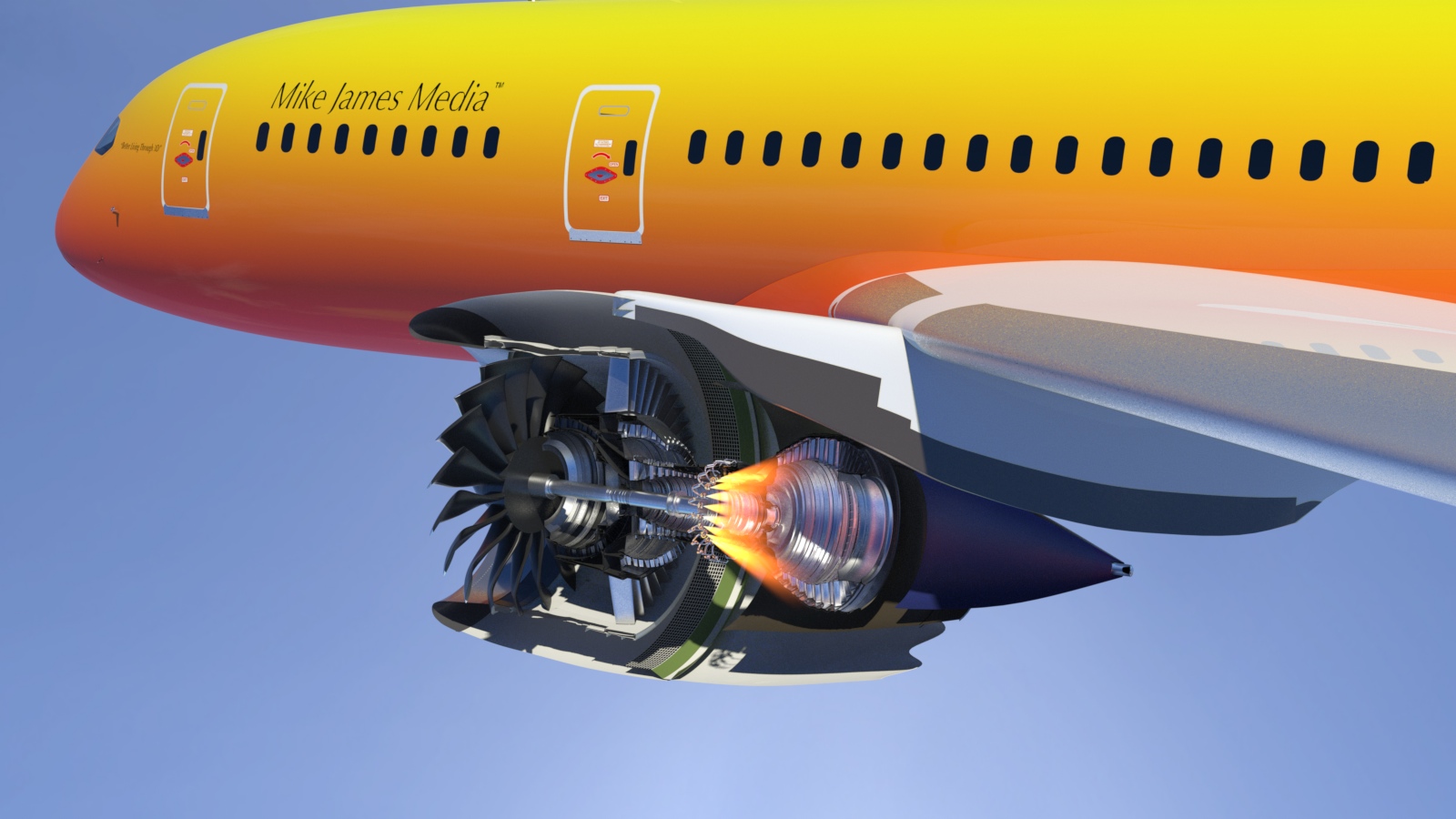 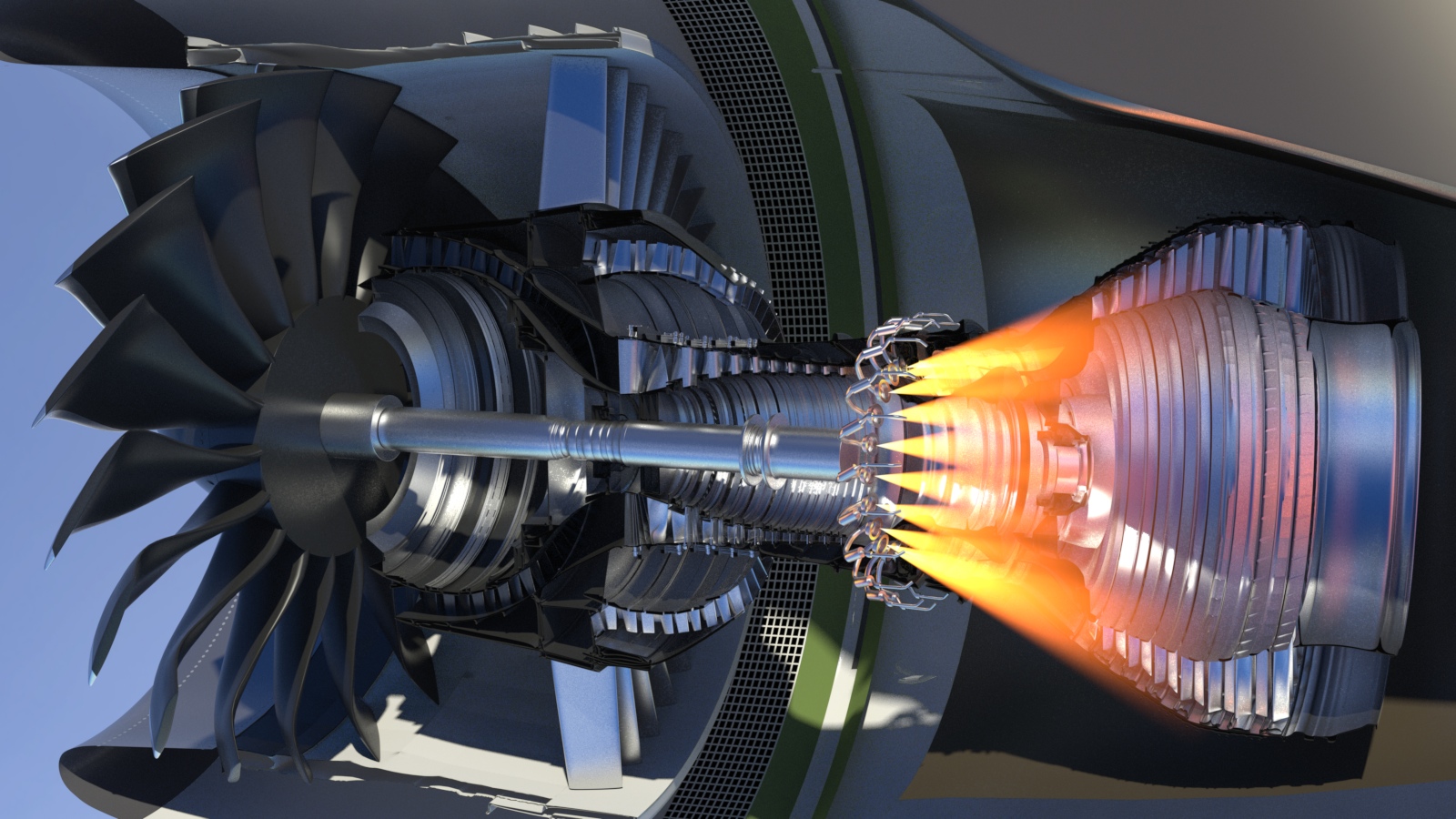