I haven't settled on the final paint scheme yet, but the plane looks a little bare with no markings at all. So, I've added the Boeing logo, in the position it was in on the test aircraft. 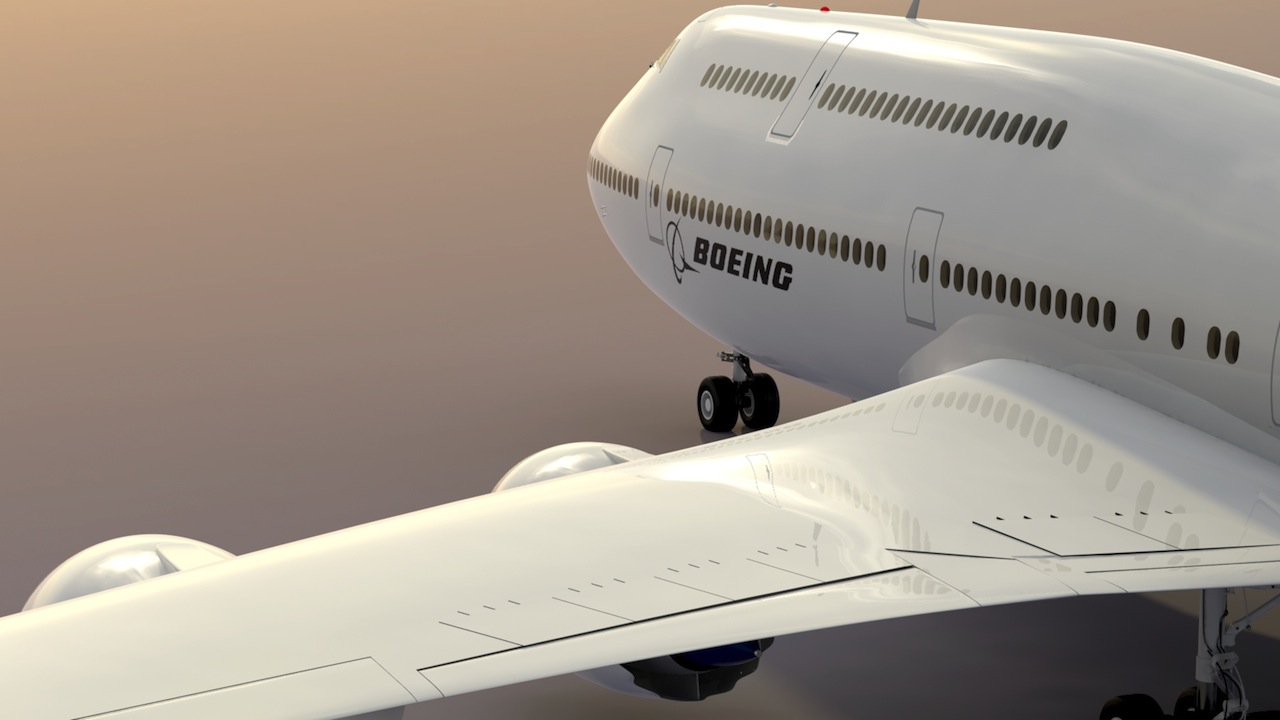 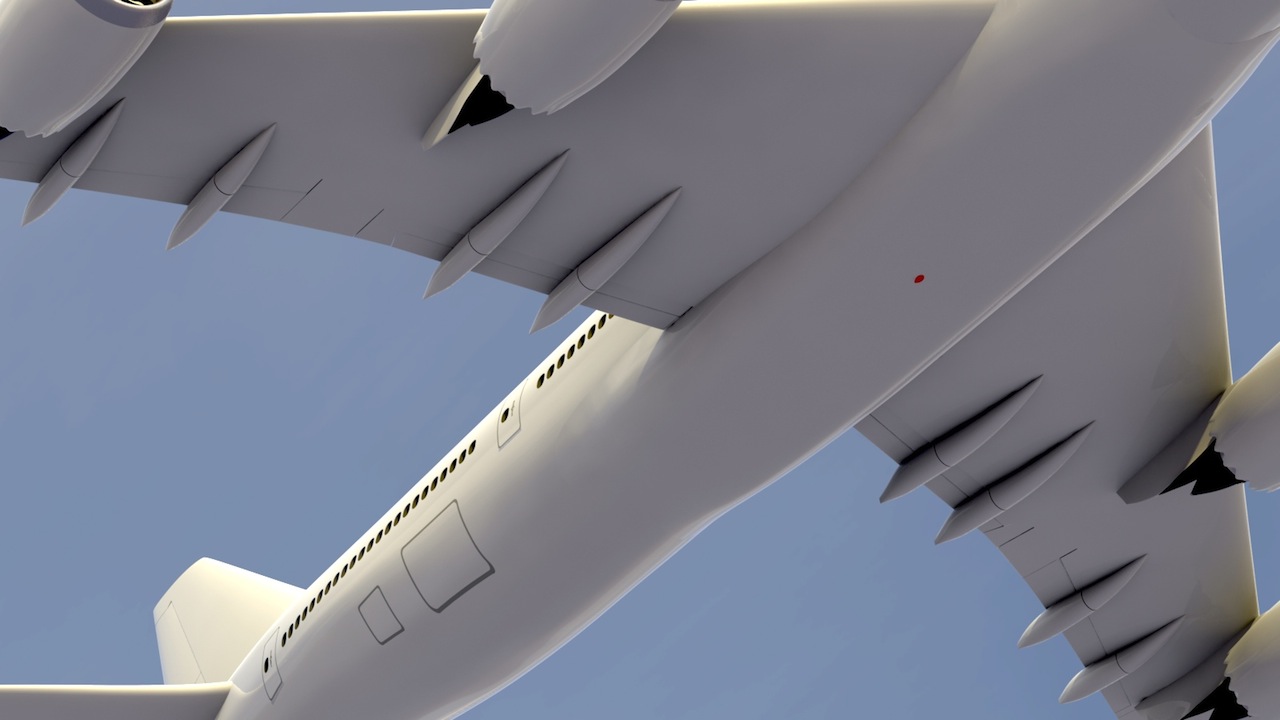 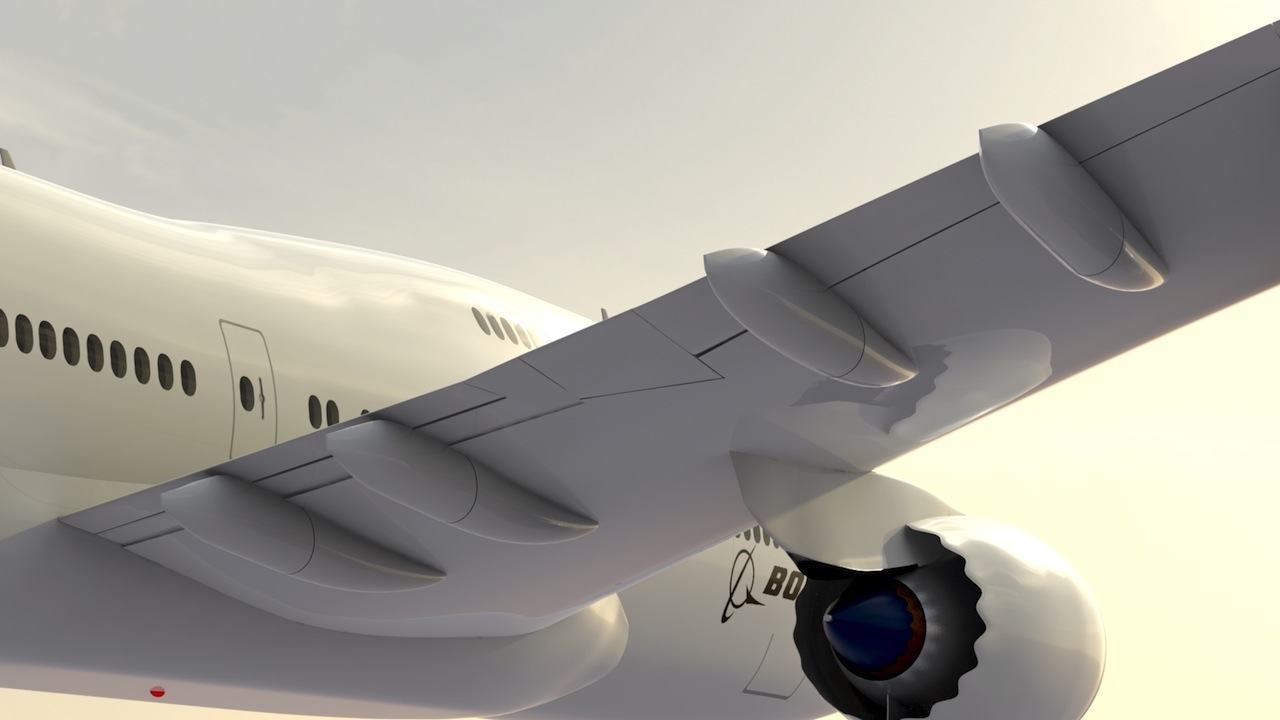 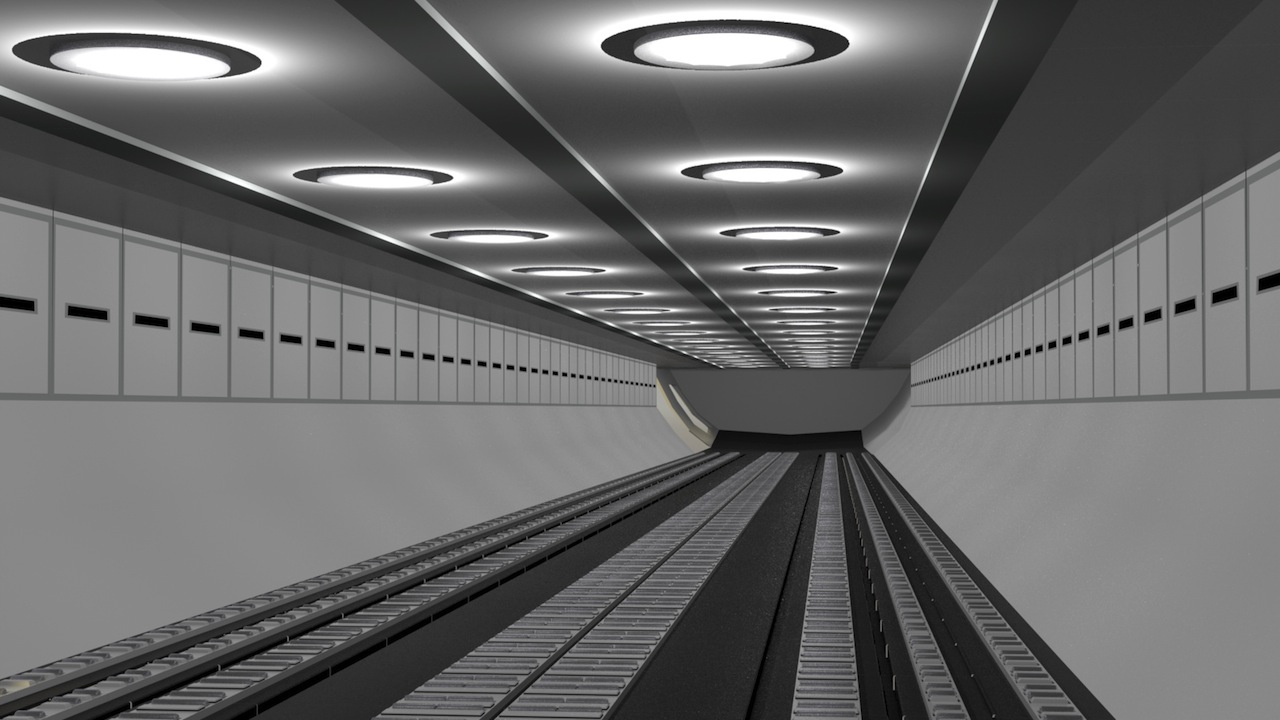 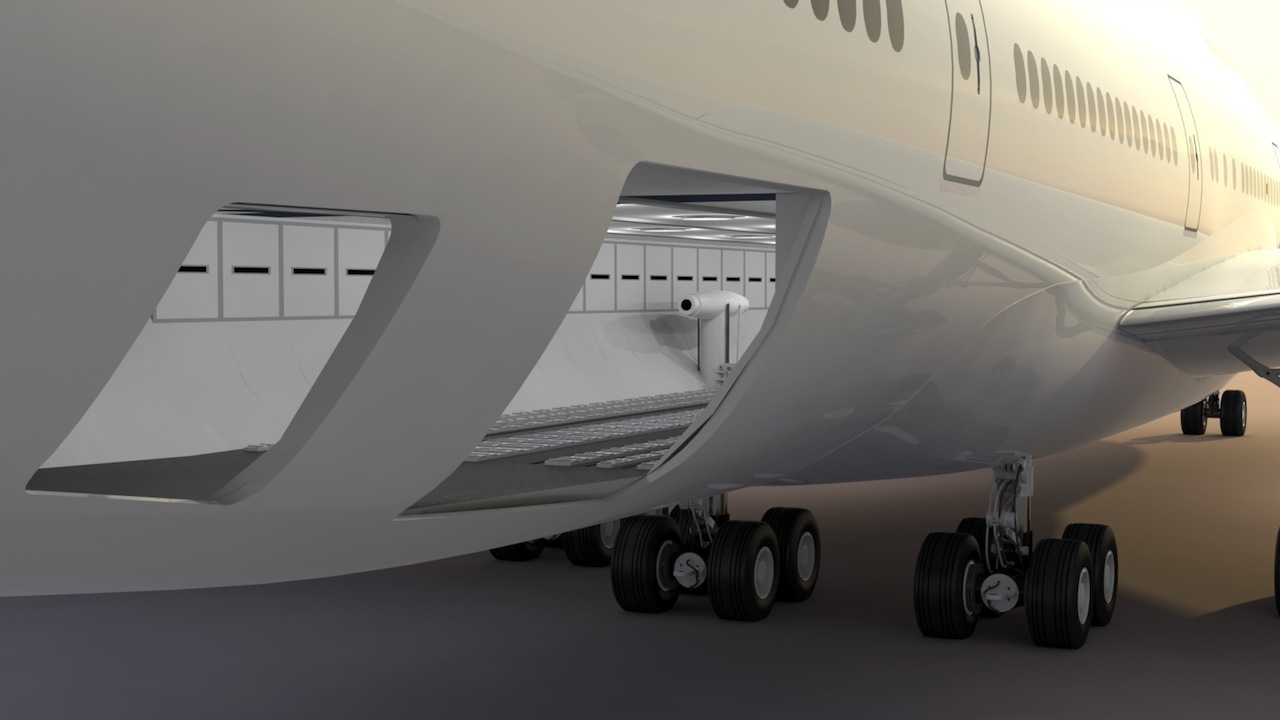 The main landing gear sequence, including what goes on with the doors, is not terribly complex, but it does call for several things to happen in order. As the plane takes off, all the oleos extend somewhat, then the landing gear "trucks" (where the wheels are attached) rotate, with the outboard mains rotating more than the inboard mains. Once rotated, they can be tucked into the gear bays. Here's what I've come up with so far. (Many landing gear parts omitted in this test, to concentrate on the struts, pivot points, oleos, and wheel truck angles.

I should have some better documentation on the landing gear in a few days, so while waiting, I've done a little preliminary rigging on the flight controls in the wings. Here, you can see the inboard and outboard flaps are deployed, and (new to this 747) the outboard ailerons are drooped. Both sets of spoilers are up. 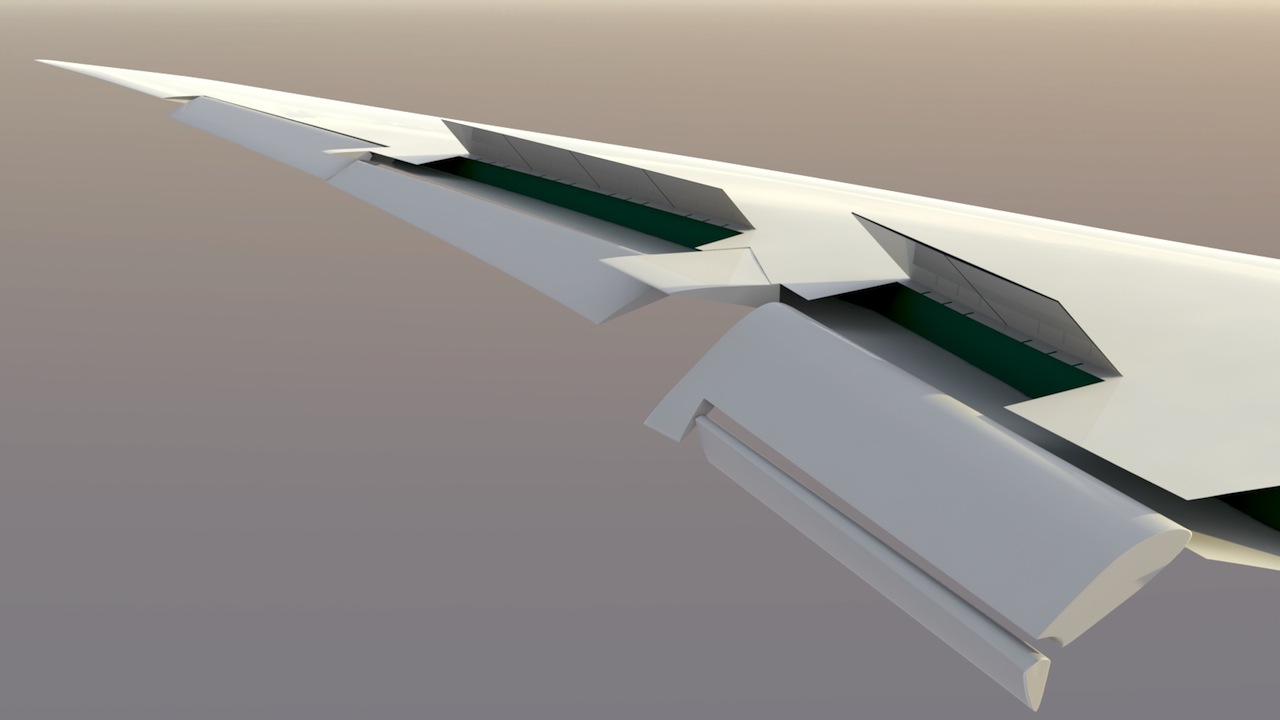 First step was to create new wheels and tires for the mains. I've dumped all my proxy parts from the 787 project, and am starting fresh, since the 747-8 landing gear is completely different.

The outboard side of the main wheels 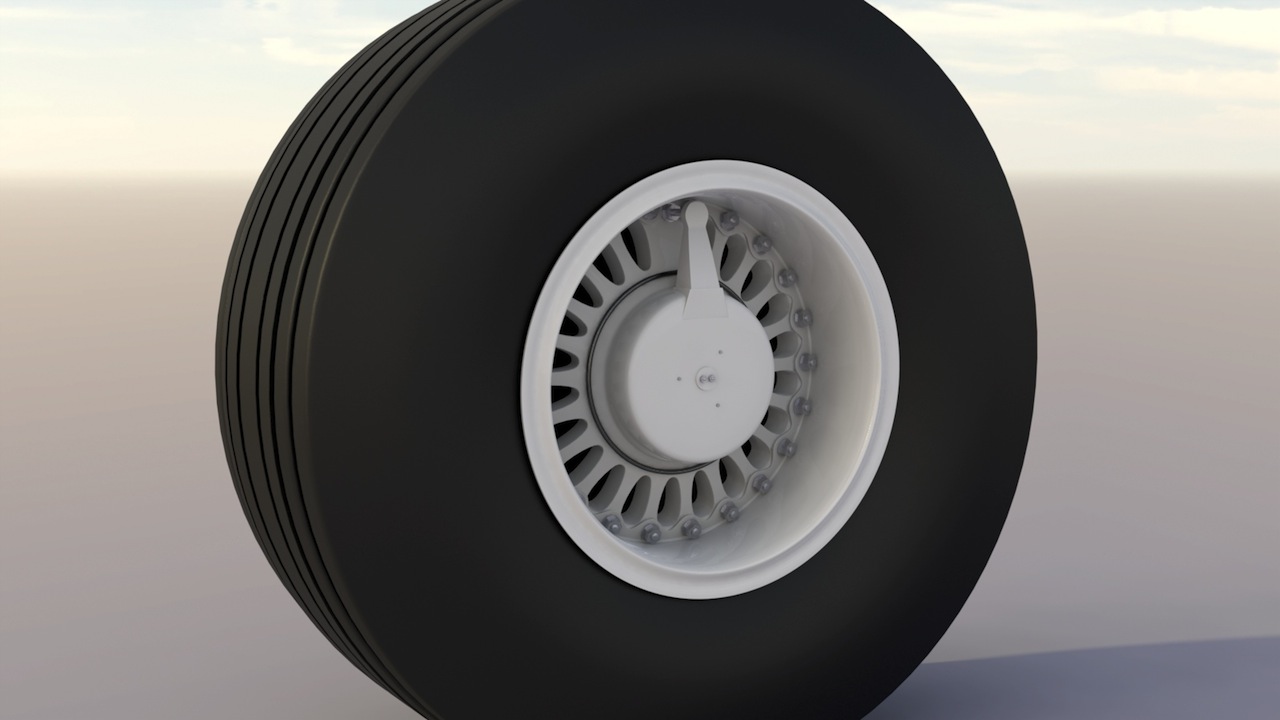 The inboard side (brakes) 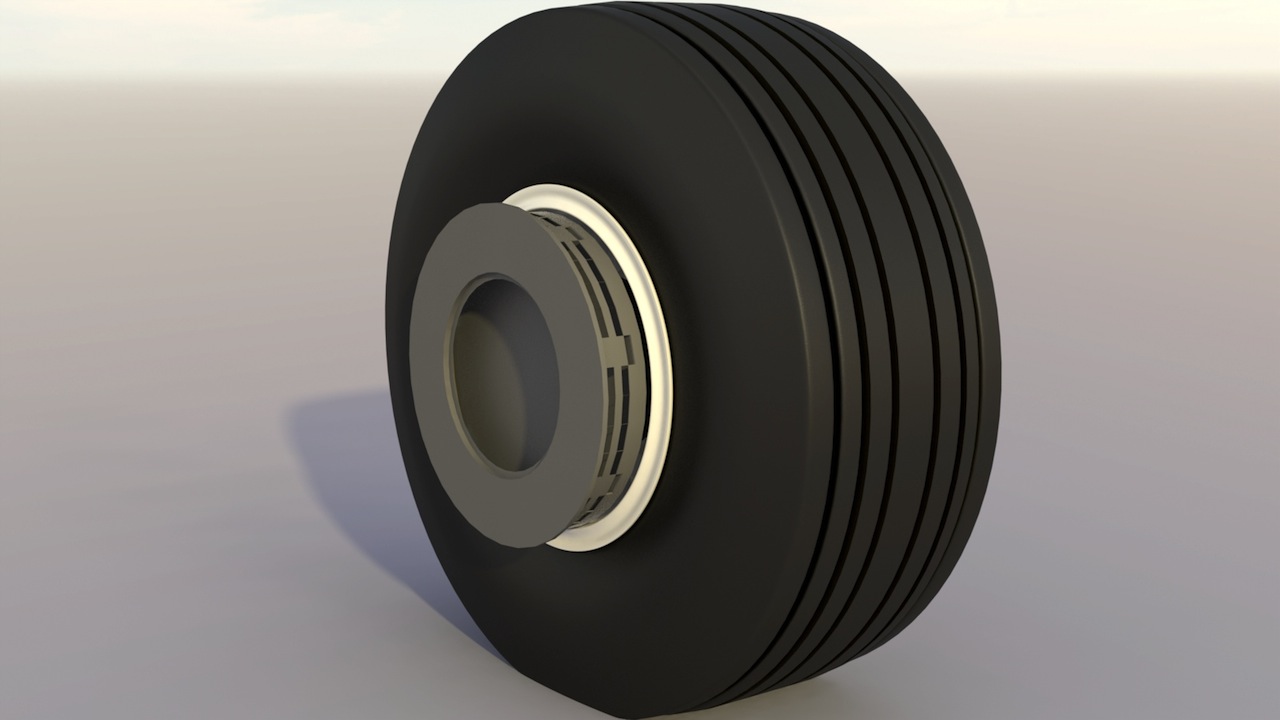 Starting on the struts and linkage

Often, I have to work from photographs alone, and as you might expect, it's not easy. In this case, I found a very nice PDF document online, from "Hogeschool van Amsterdam". (Amsterdam University of Applied Sciences) which was an engineering study of the 747's landing gear. This is a huge help, in getting all the critical pivot points in the proper places, so I can rig the gear effectively later. Special thanks to them! ( link to the school site, here ) 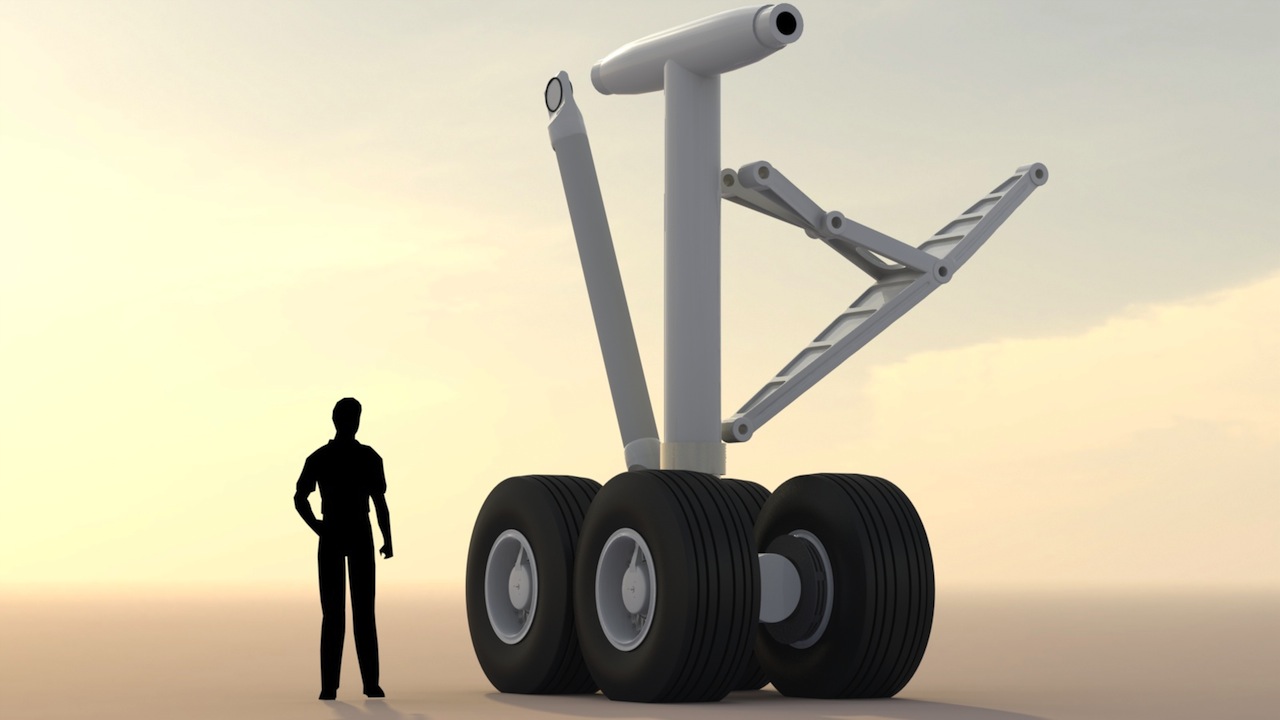 A couple of screen captures showing the references mentioned above. 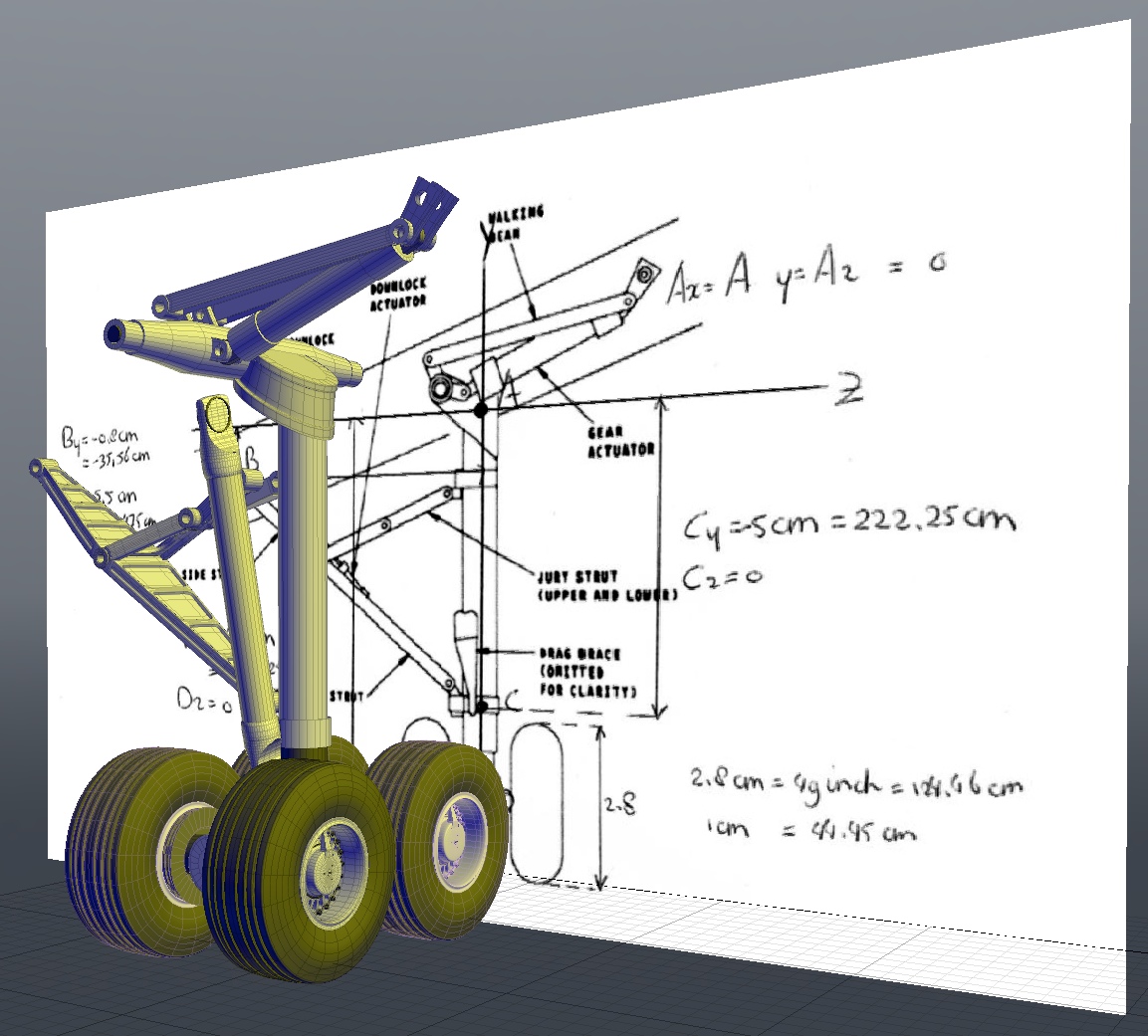 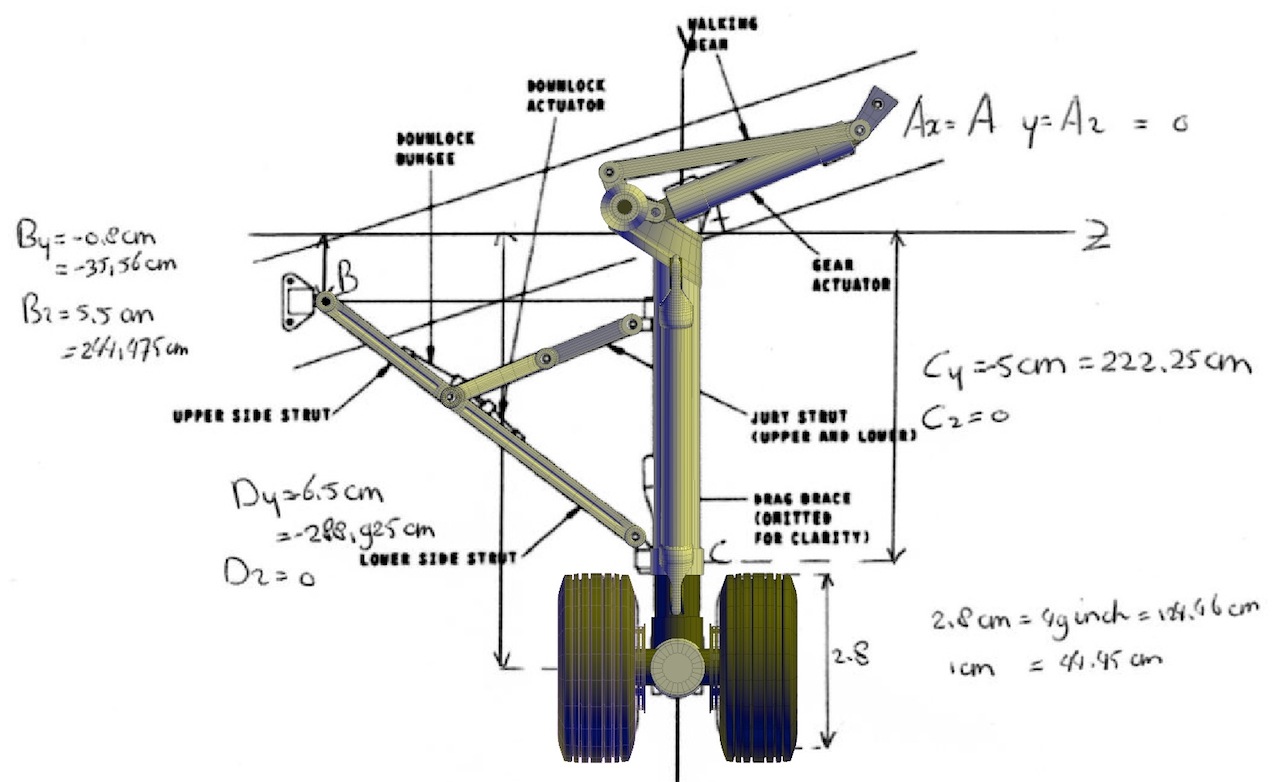 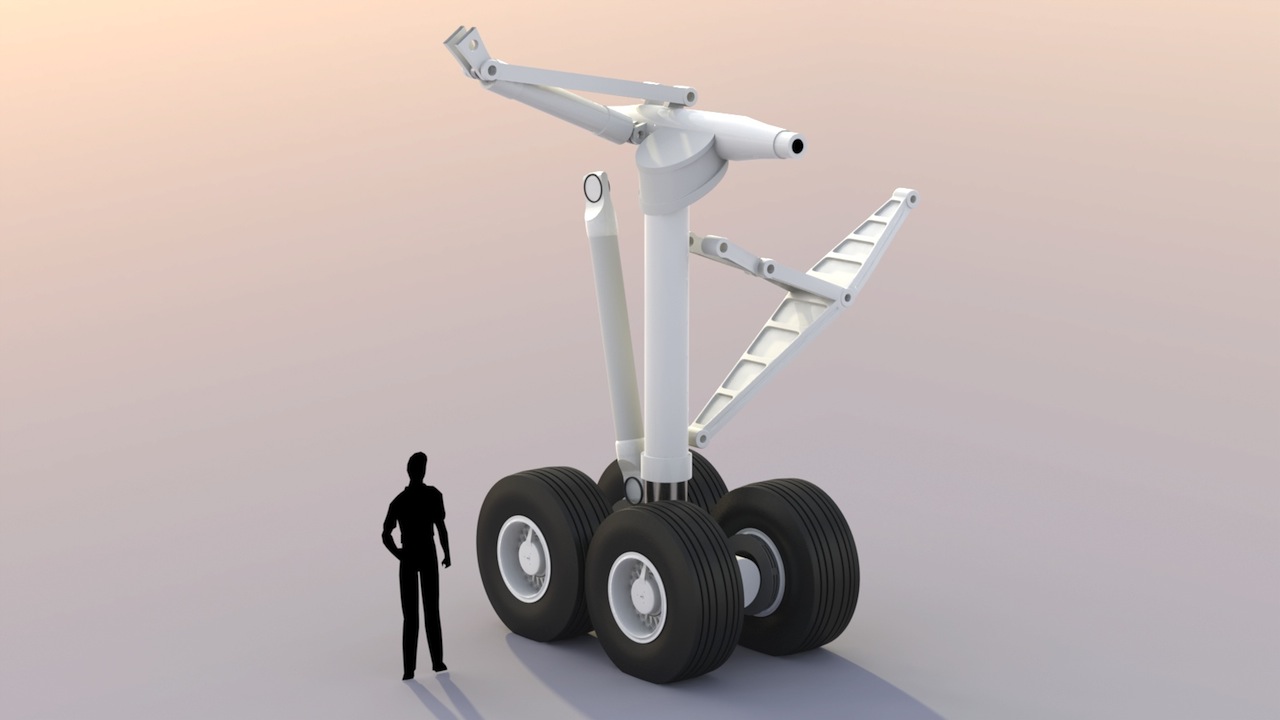 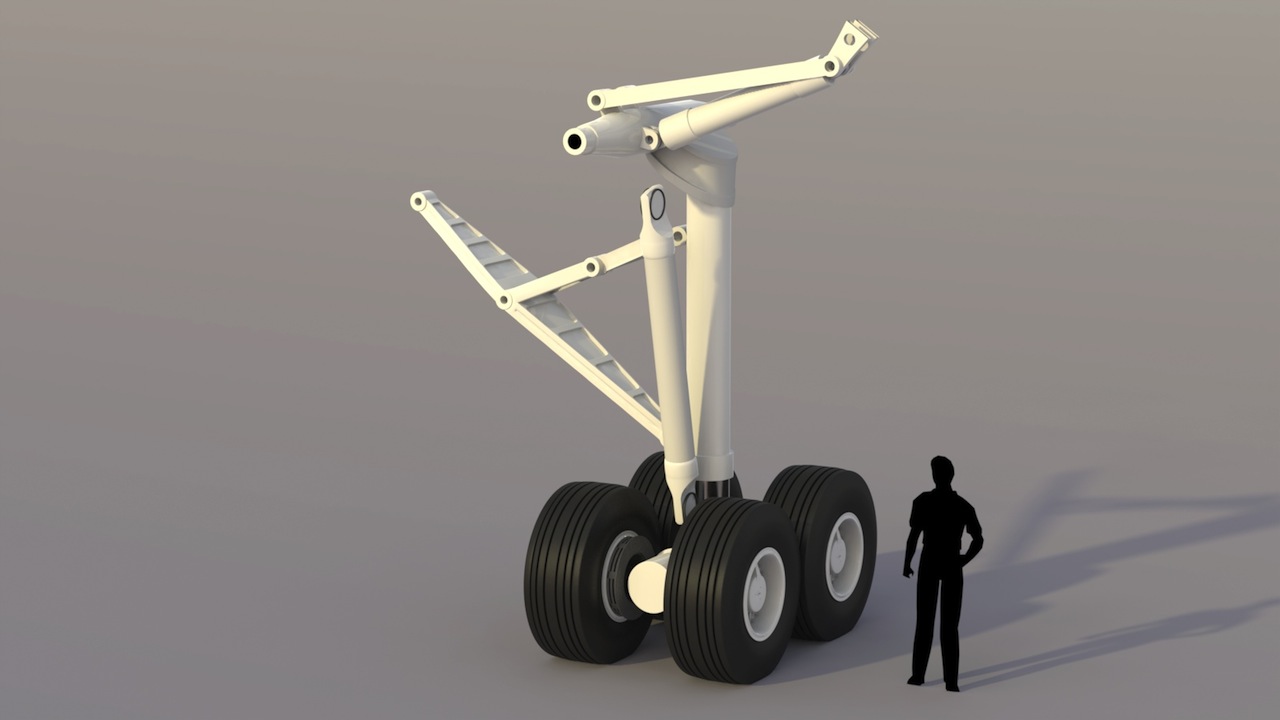 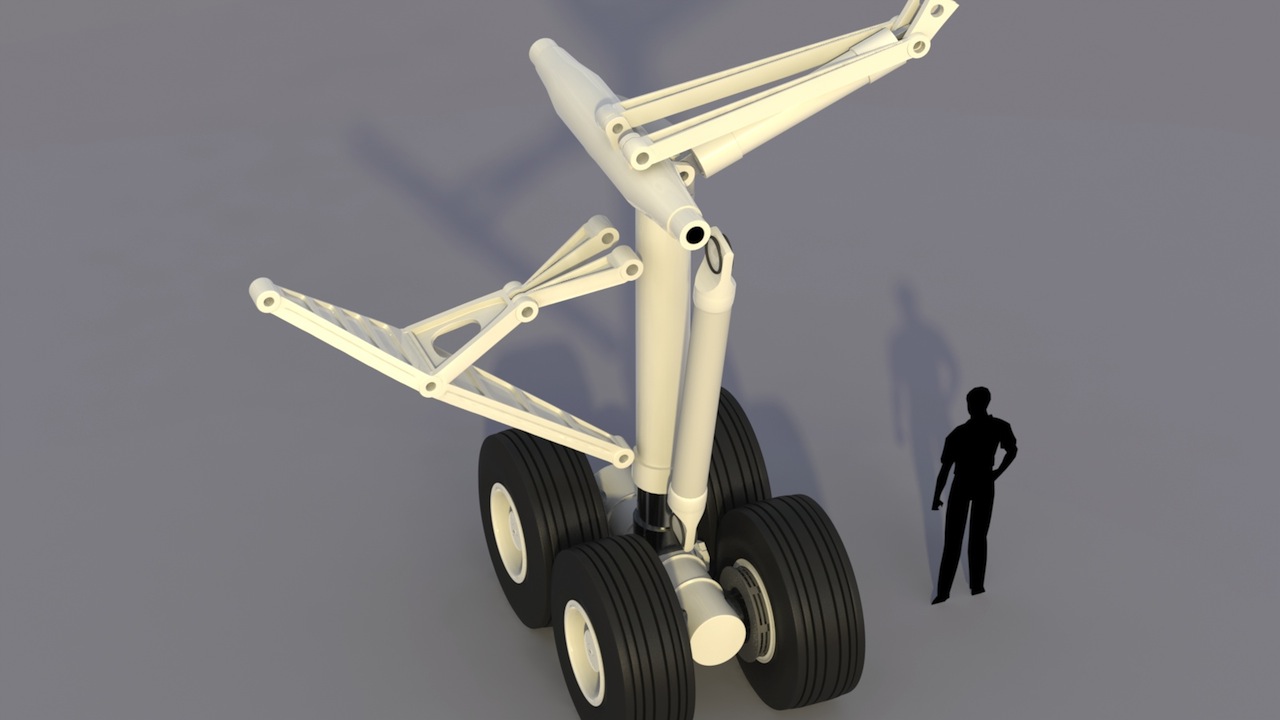