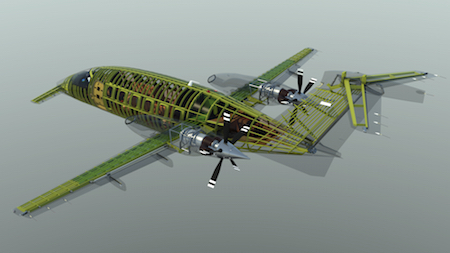 This model is by far, the most accurate, most detailed and most highly-rigged model I've ever produced. It's suitable for the highest-end rendering, animation, or motion picture use, and is still being upgraded on a regular basis. So, this page is longer and more detailed than what you'll find for most of the other models in my catalog. The feature list, further down on this page, will always show the latest updates.

I'll also be providing a Piaggio P180 "Evo" variant of this model soon...

I've provided a fairly in-depth outline of the model's features on this page. If you're a 3D modeler, or simply are curious, click here to see the follow-along article.

Click here to view a movie showing you all of the major features of this model. (opens in a new tab)


This model features.... Everything!

The level of accuracy and detail in this model is only possible thanks to a relationship I formed with some Piaggio engineers in Genoa, Italy, many years ago, and I can't thank them enough for their generosity. In return for their help, I promised them I would never redistribute any of the documentation used to build this model, and I've always kept that promise. Today, unfortunately, most manufacturers are very reluctant to distribute detailed information about their products, which makes it tough for those of us who wish to build accurate models.

I have a long history of researching this aircraft, which began in the mid 1990's and continues today. It's a marvel of engineering, a truly ingenious design, and in my opinion, quite a beautiful aircraft too. I've built three other versions of it previously, as hardware and software have improved over the years. So, when I decided to "upres" this model in 2014, to all Catmull-Clark surfaces, I also decided to take this project to the very limits of my hardware and software's capabilities, and to add every bit of detail that I had documentation for. It's been quite an experience, and this model will probably remain a work in progress for some time.


The feature list is constantly expanding, but here's what the model currently includes:

Each of the renders below is larger than what will display in your browser. To view any of them in higher resolution, just drag them to your dekstop.

Construction began with a precision Catmull-Clark exterior, based on Piaggio drawings. This is where the most time was spent focusing on accuracy, and provides limits for all of the internal structures that follow. All exterior geometry that would later be animated, or simply shown as separate parts, was separated into it's appropriate hierarchies. (Fuselage, Wings, Tail, etc.) Although MODO supports edge-weighting beautifully, I did not use it on this model, in order to make it exportable to more file formats. 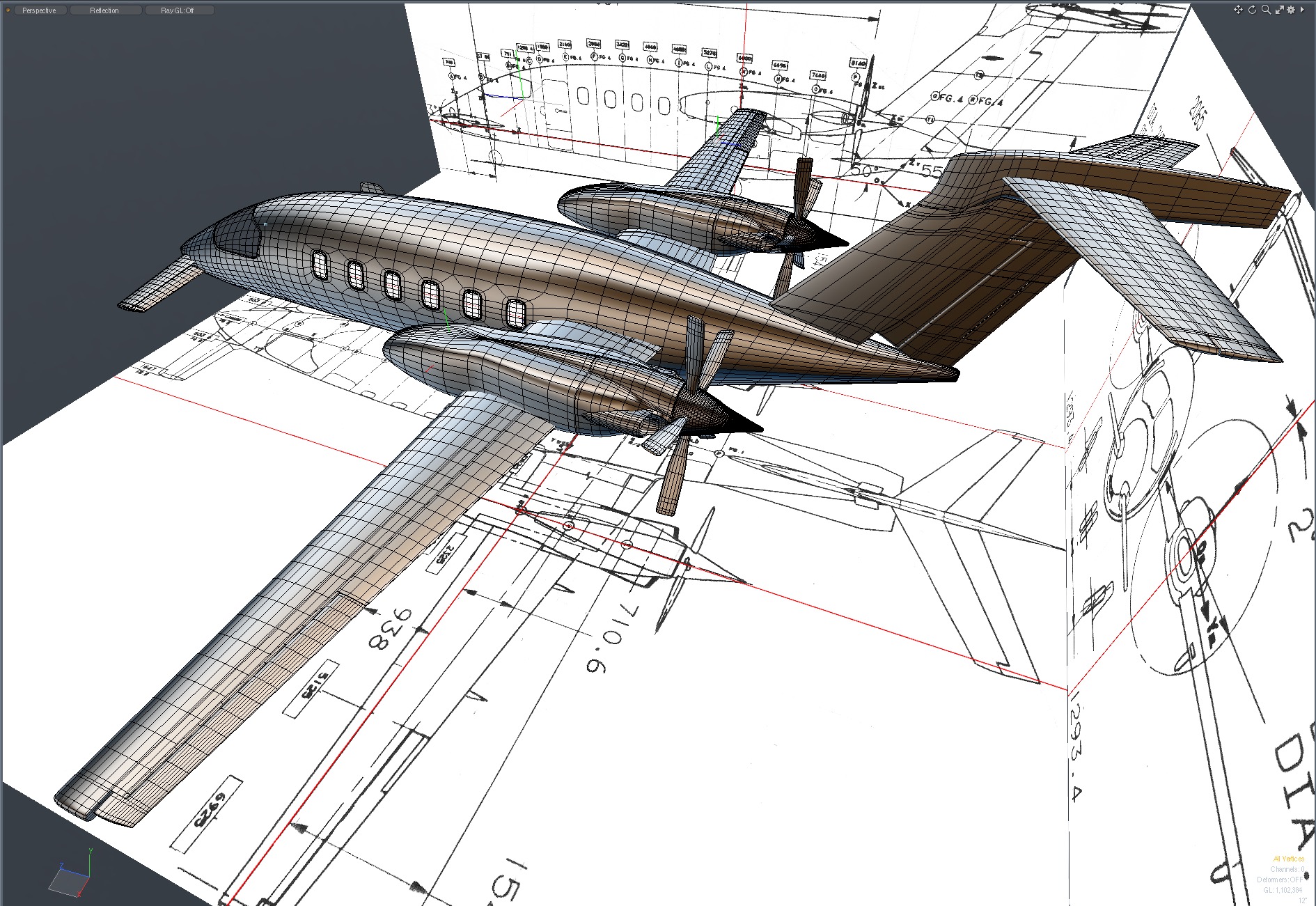 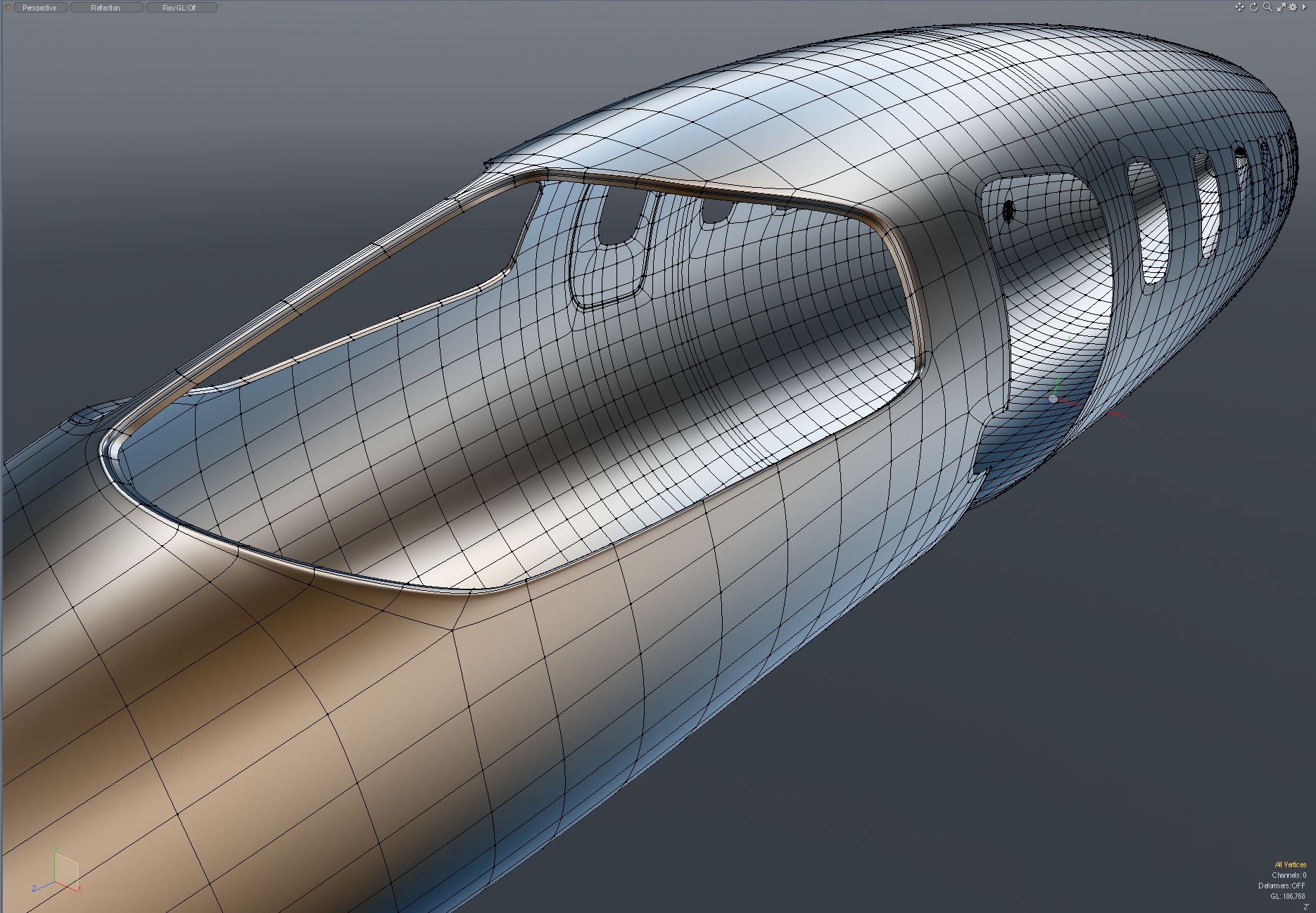 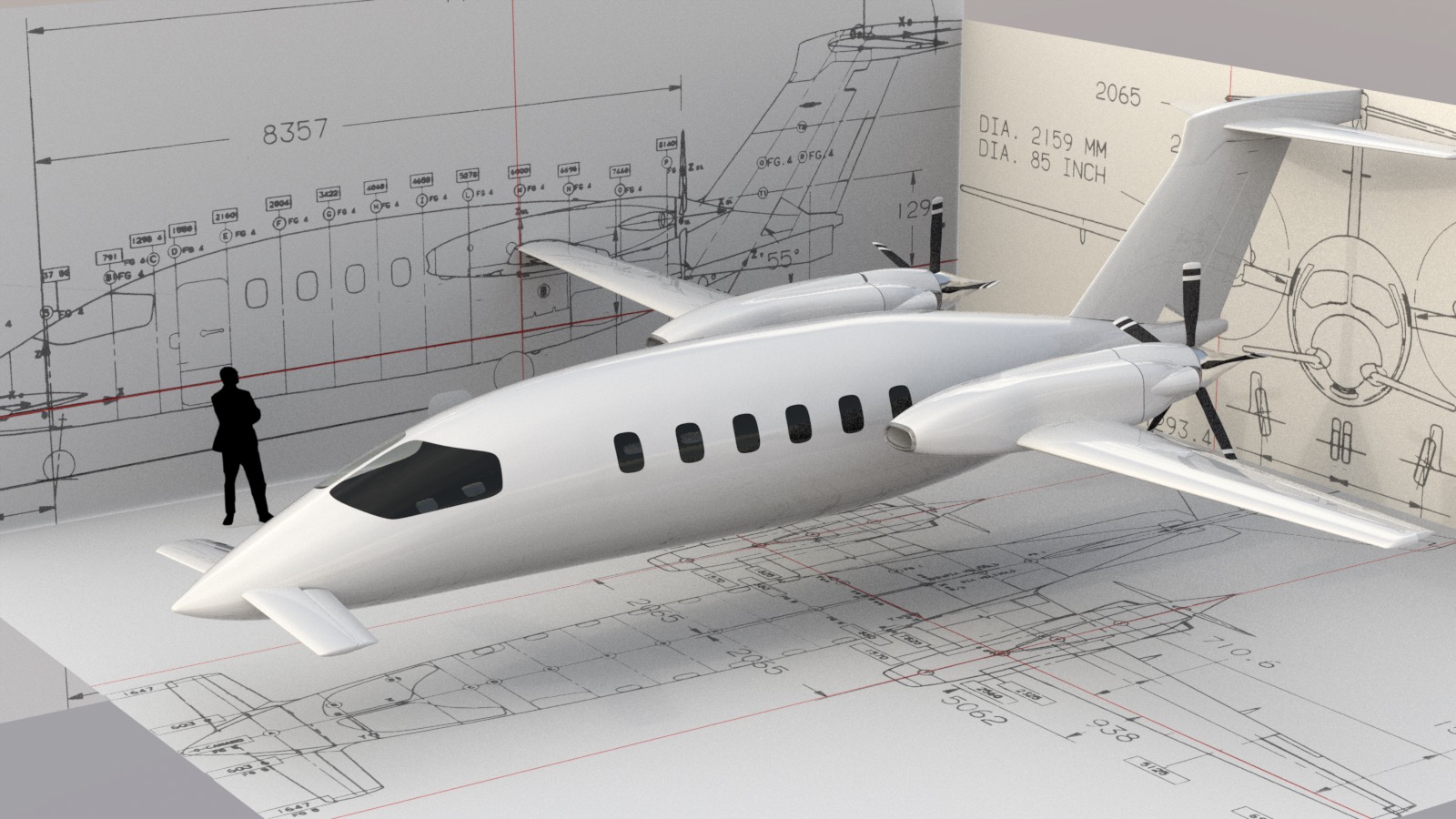 First, major structural elements such as bulkheads, were created. These provide references for where major elements join together. 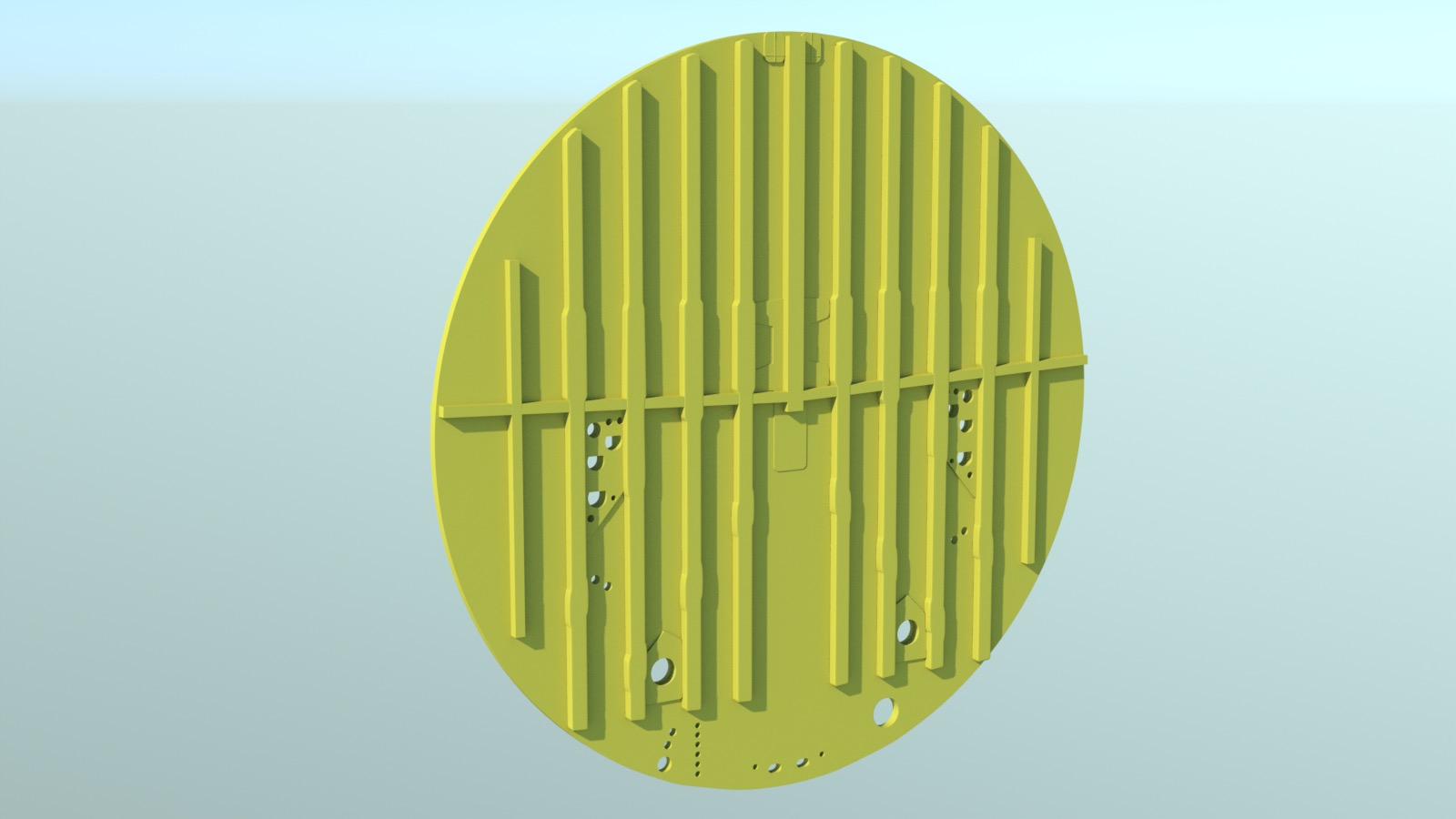 All components in the cockpit are actual geometry, with each button, lever, and knob made to be individually animatable. Wherever there were multiple copies of items like screws, time was taken to slightly rotate each of them, to look more natural. 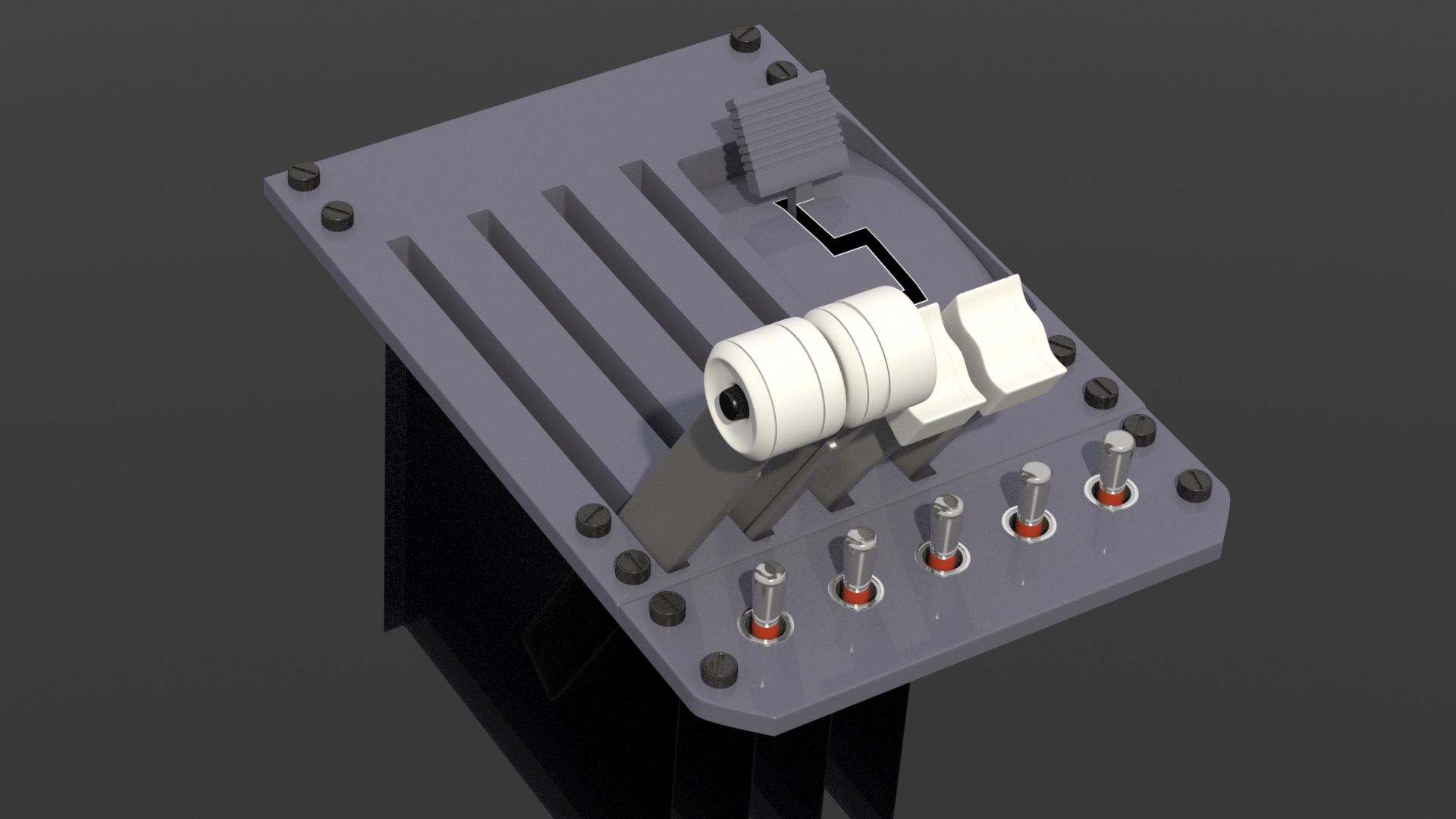 All of the cockpit parts were also separated into logical hierarchies, such as "Main Panel", "Center Pedestal", Control Yokes", etc., for later animation. 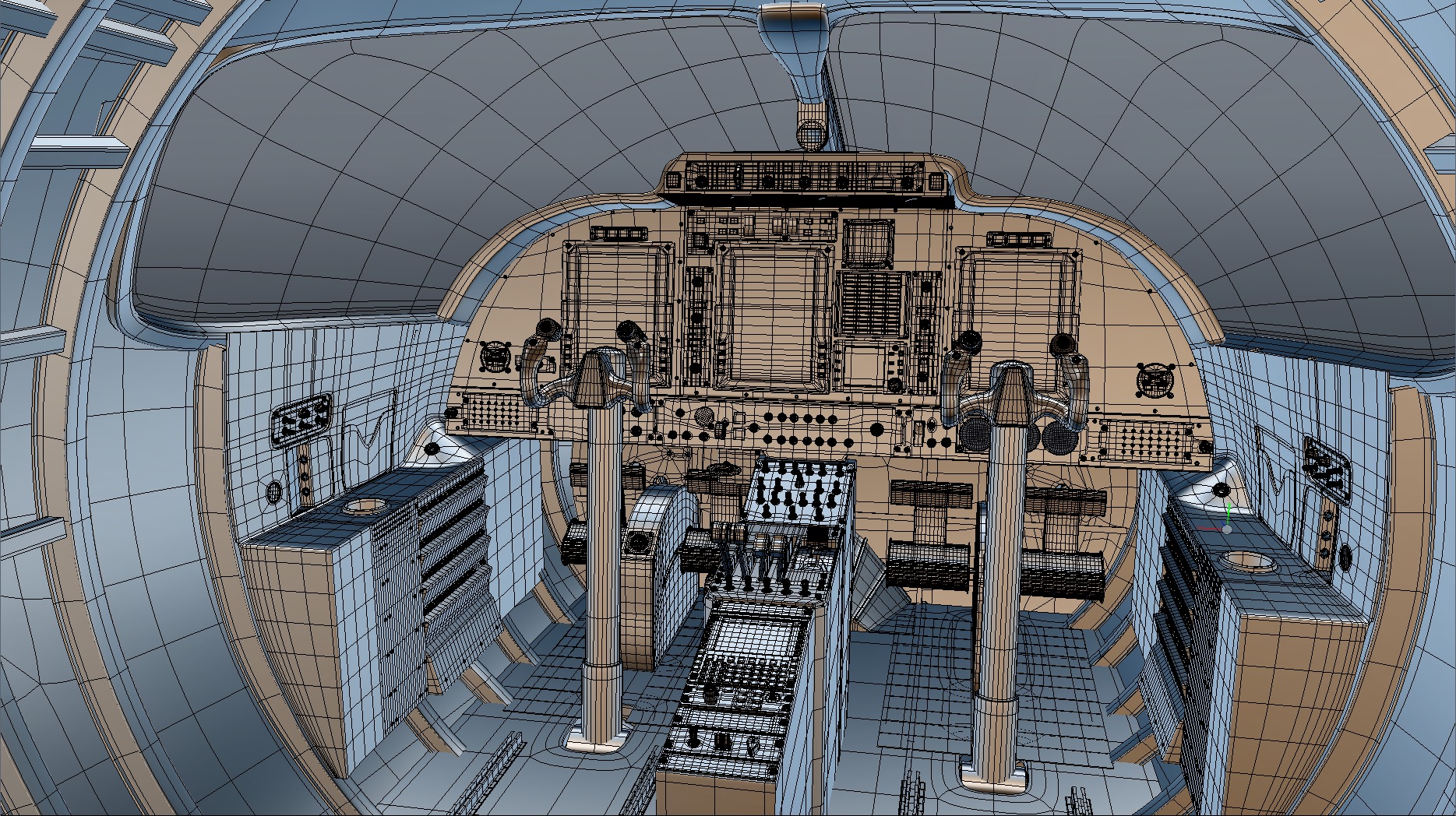 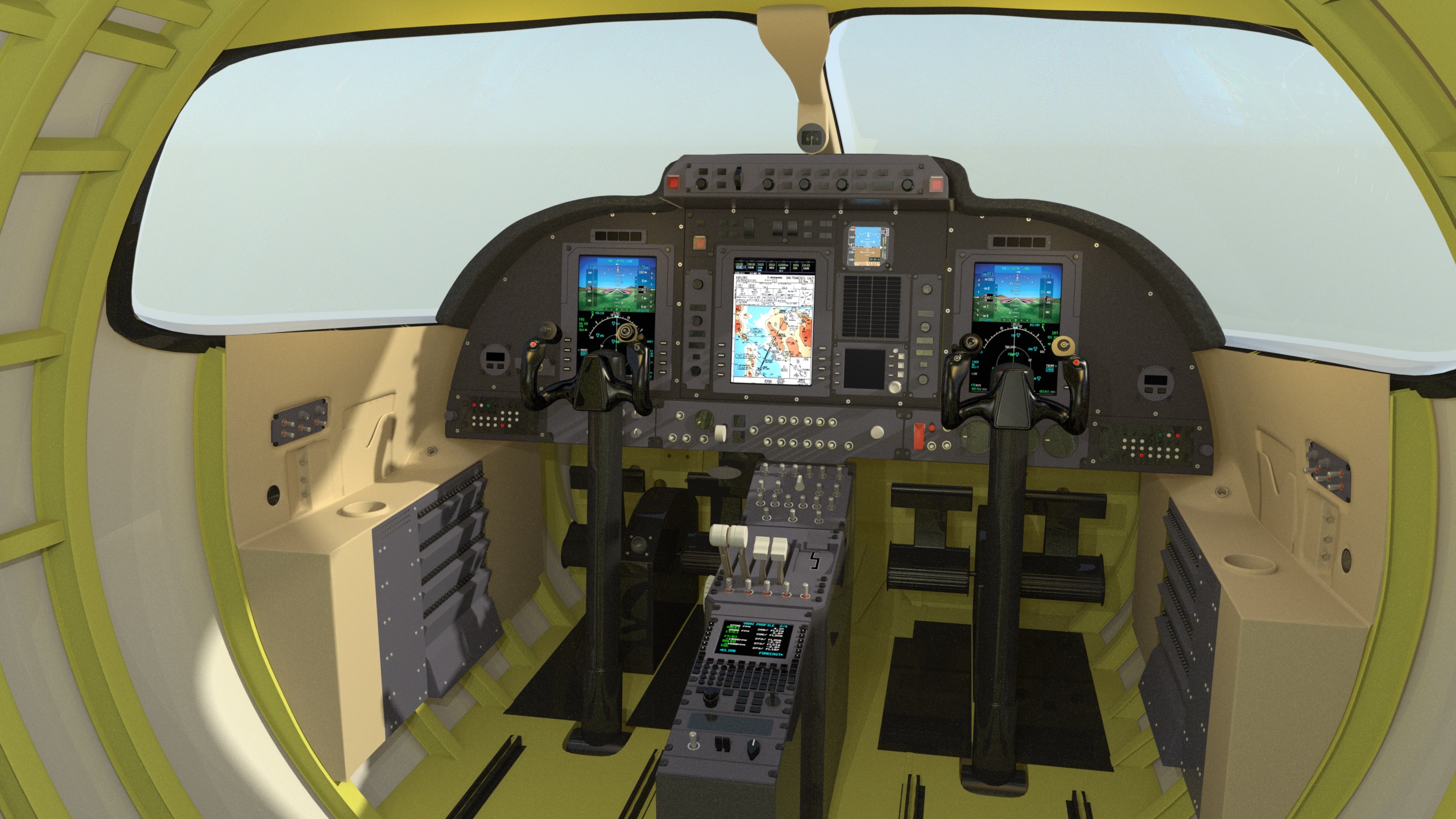 As with the rest of the model, the landing gear was completely rebuilt from scratch for this version, resulting in better accuracy, and more realistic animation of all of the moving parts. 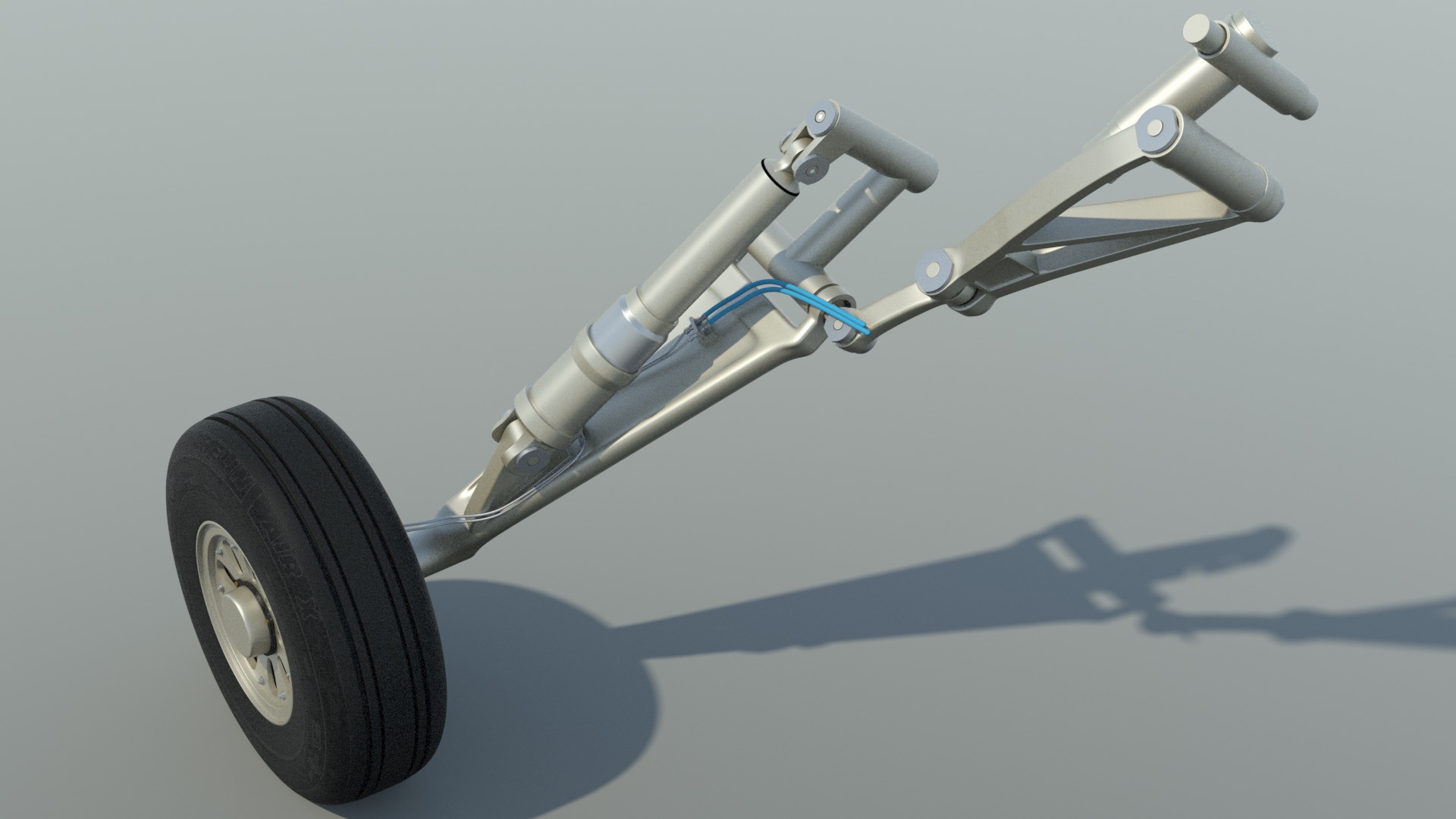 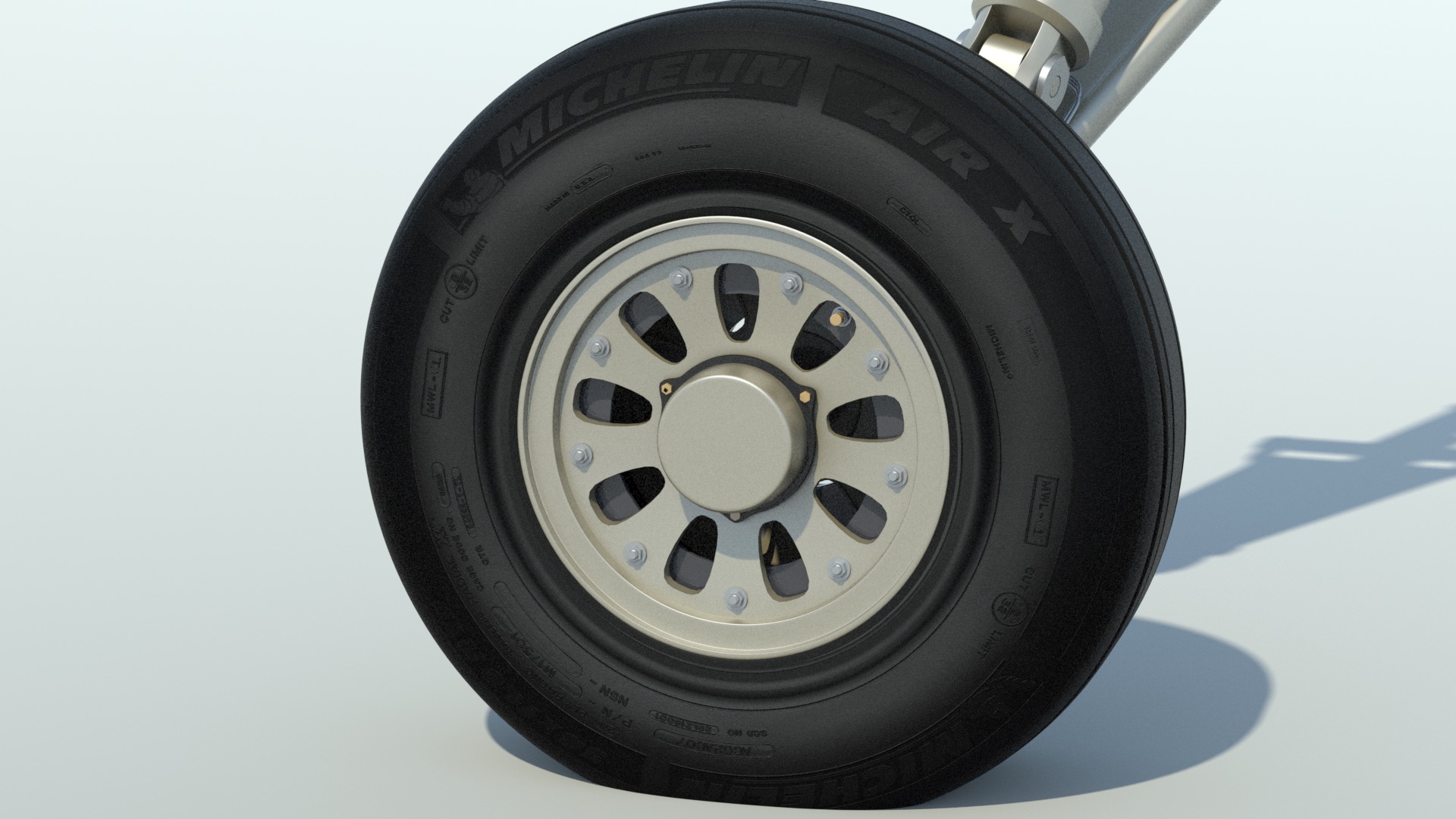 All exterior lights work as they do on the actual aircraft, and those that flash have realistic rates already keyframed. 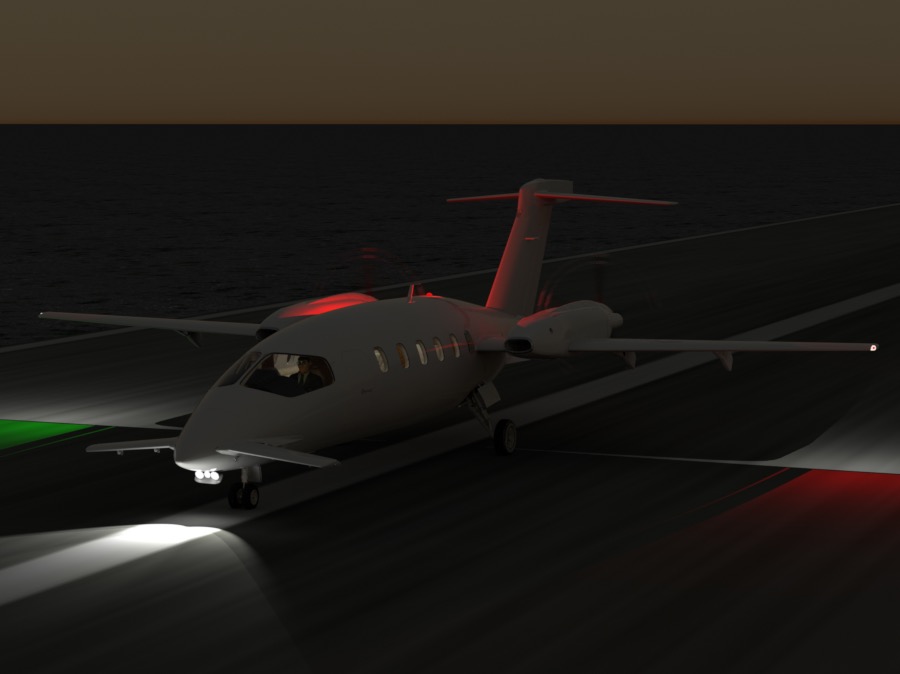 From the beginning, the model was set up so that it could be displayed as shown below, with the internal structures visible, in "modules", like you'd see on the factory floor, or with the external skin covering those parts, as you'd see it in real life. 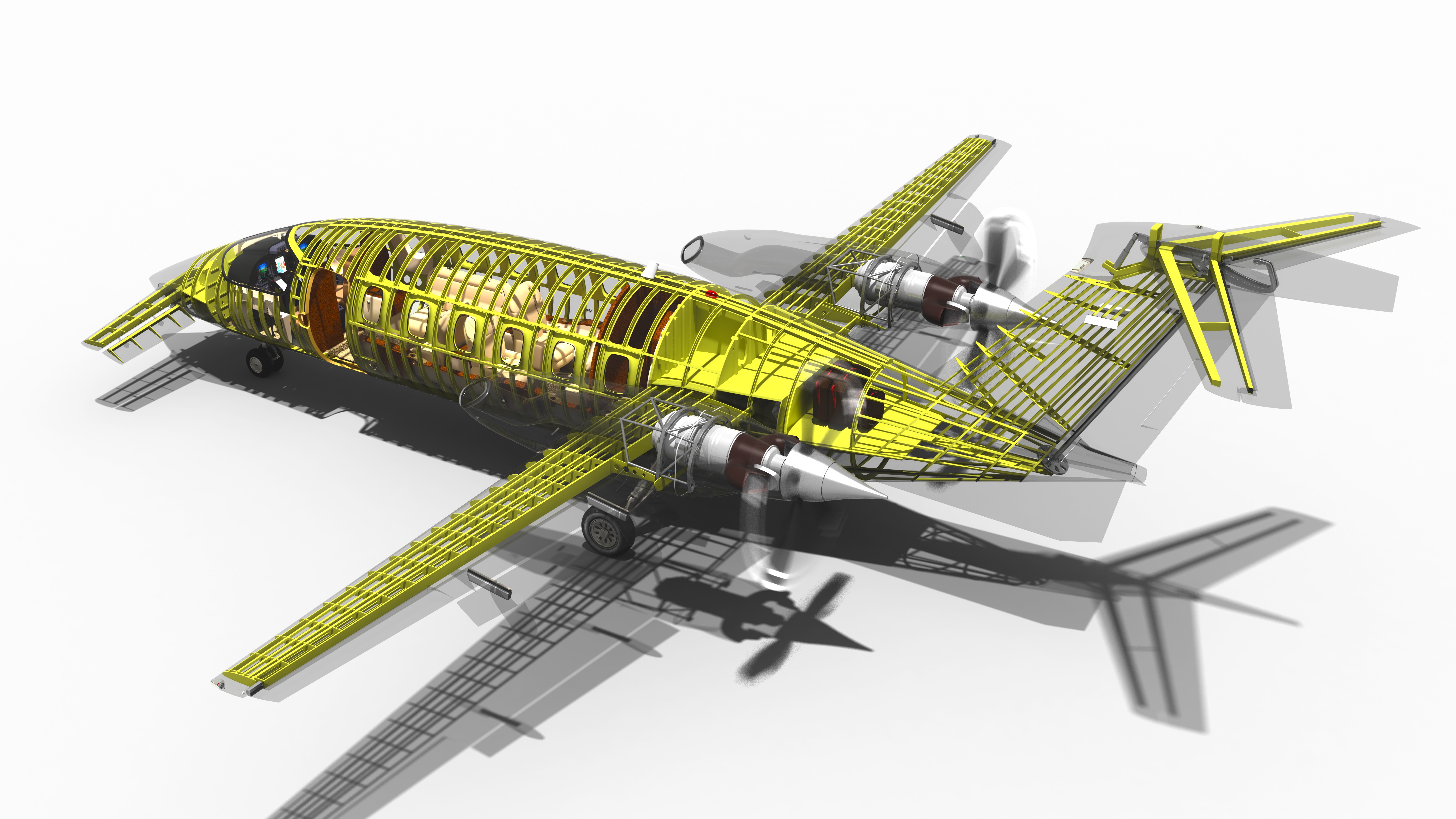 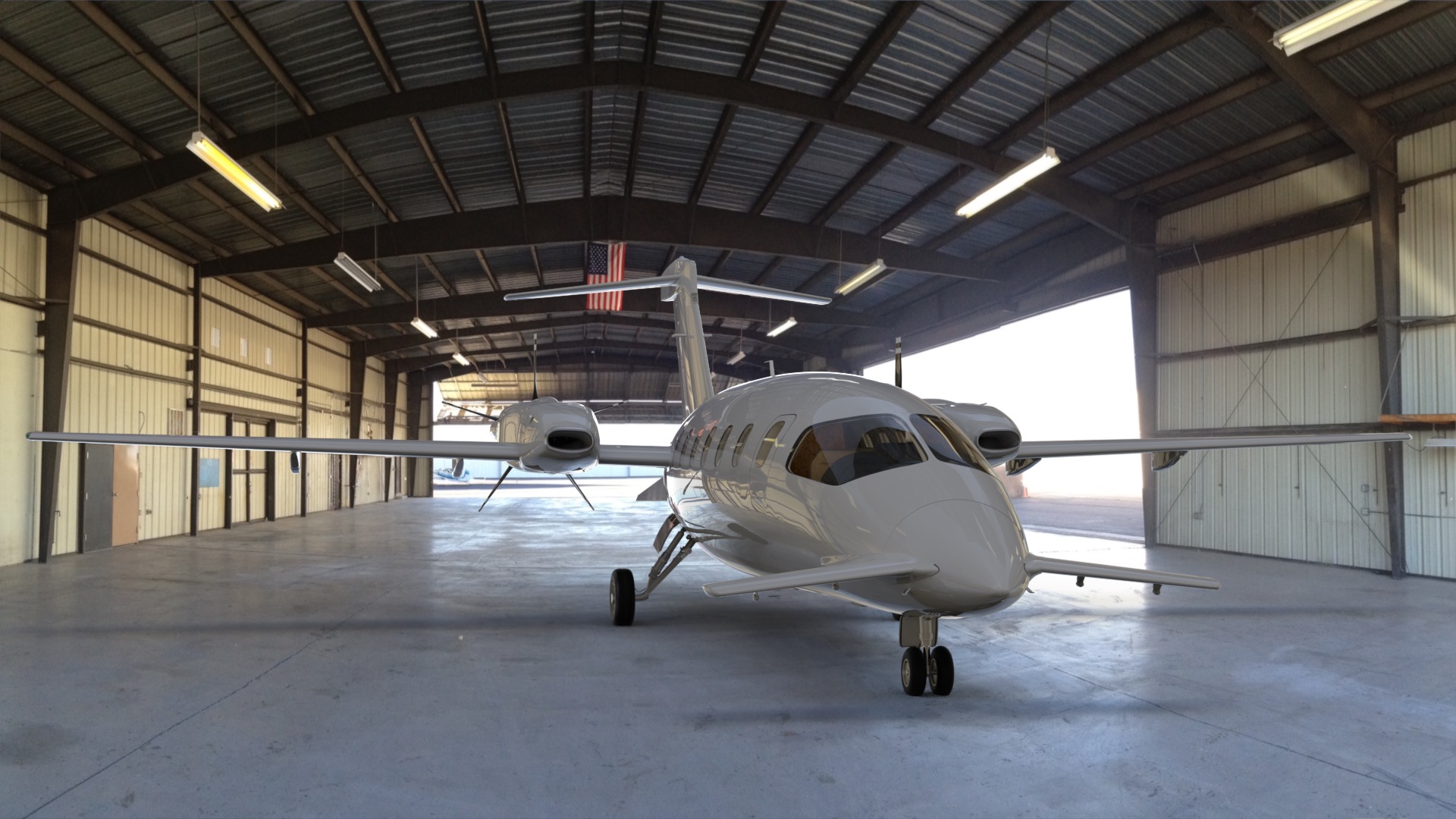 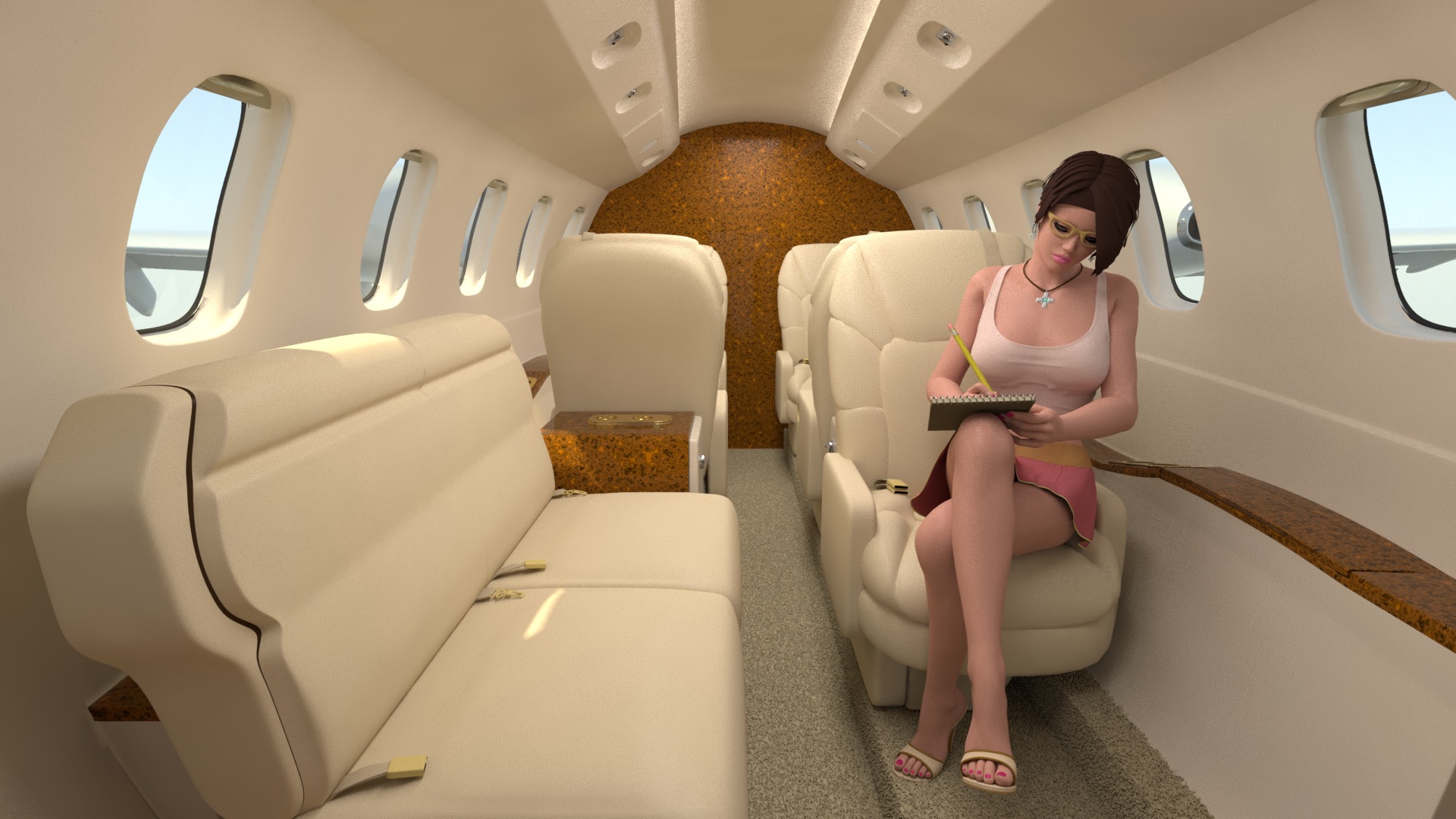 Major structural elements, as well as a complete flight control system, animatable radar, retractable landing gear with sequencing doors, fuel system with plumbing, engines, etc., are all included. (Electrical wiring and hydraulics are in the works.) 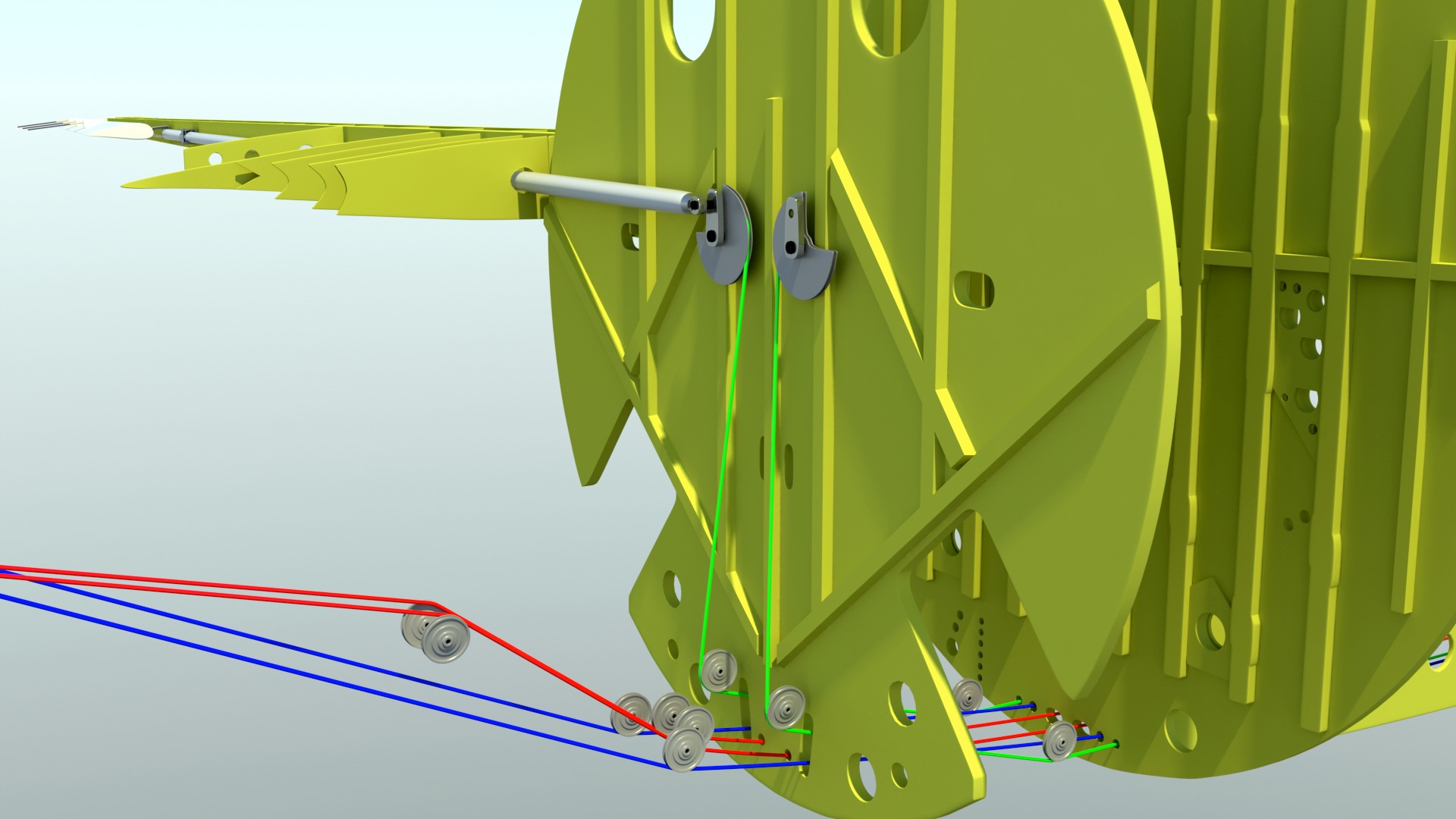 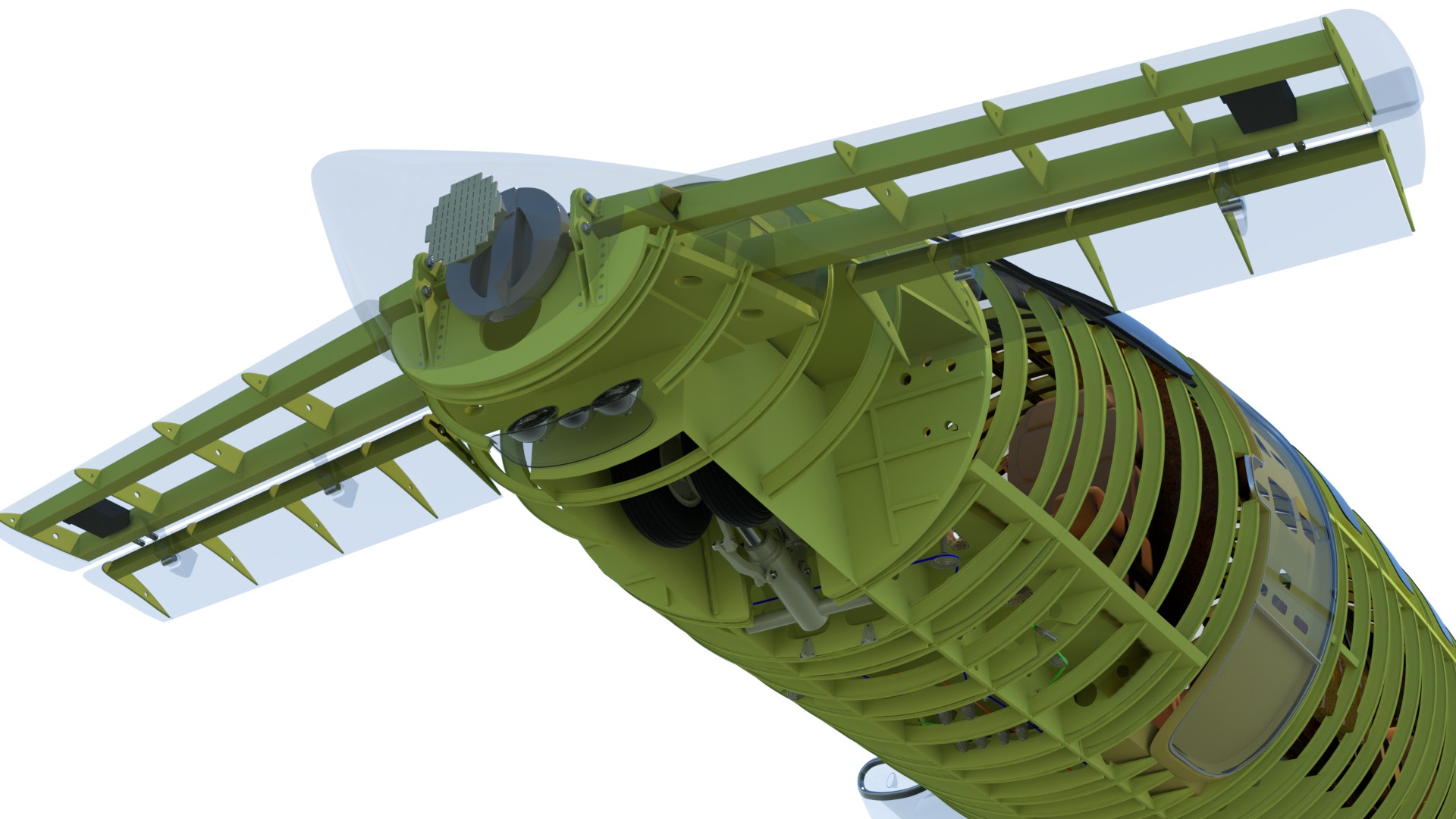 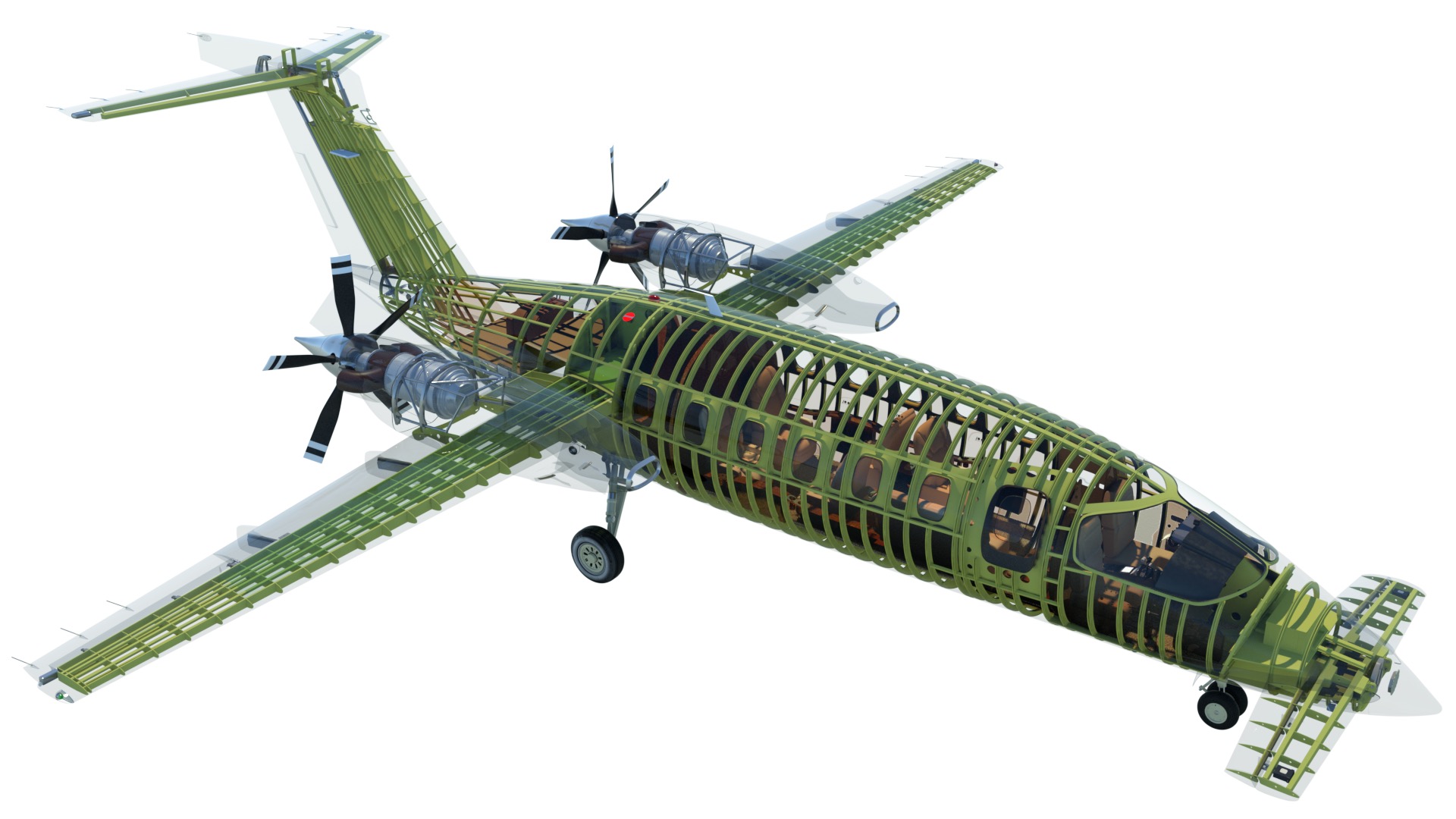 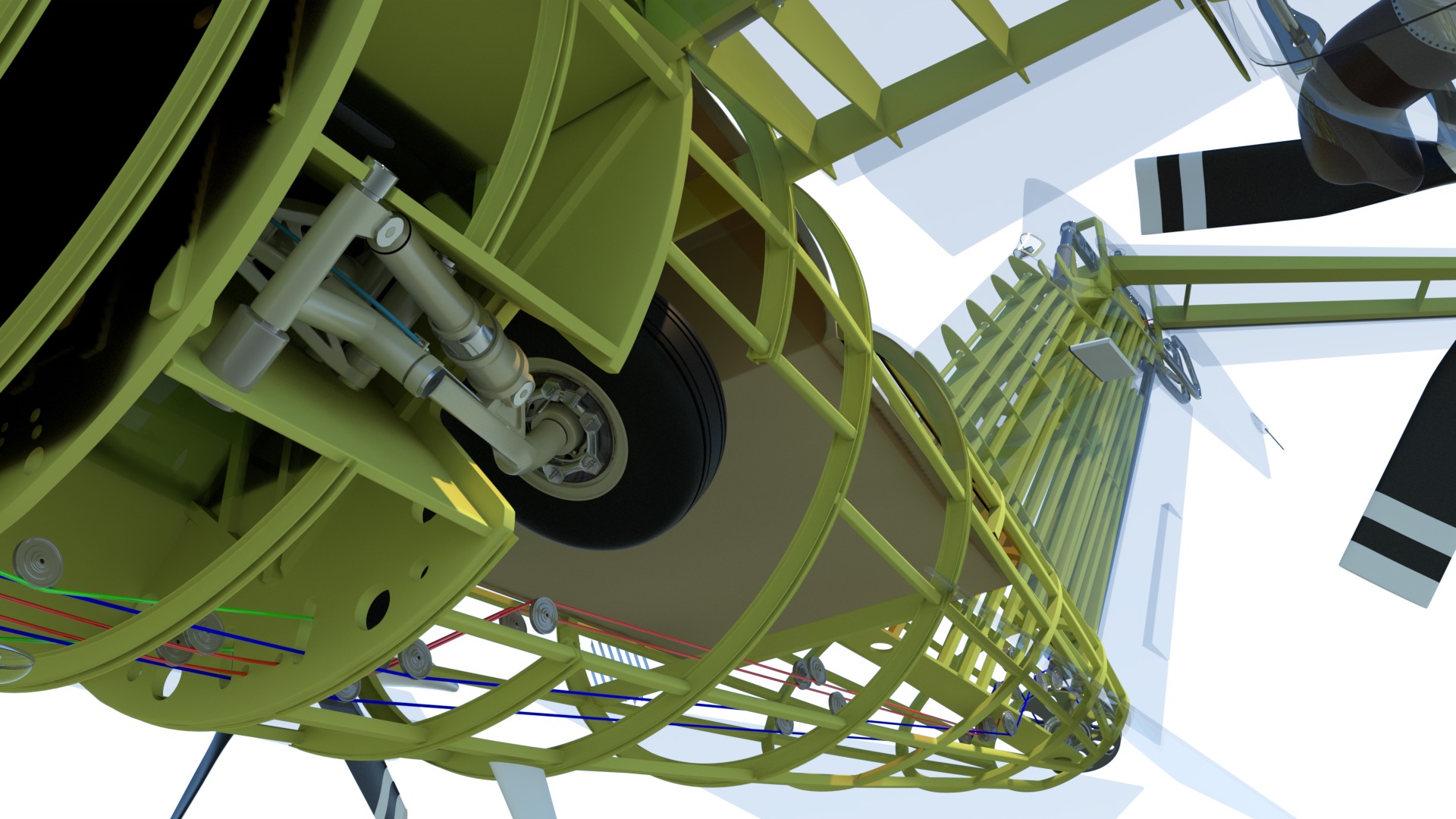 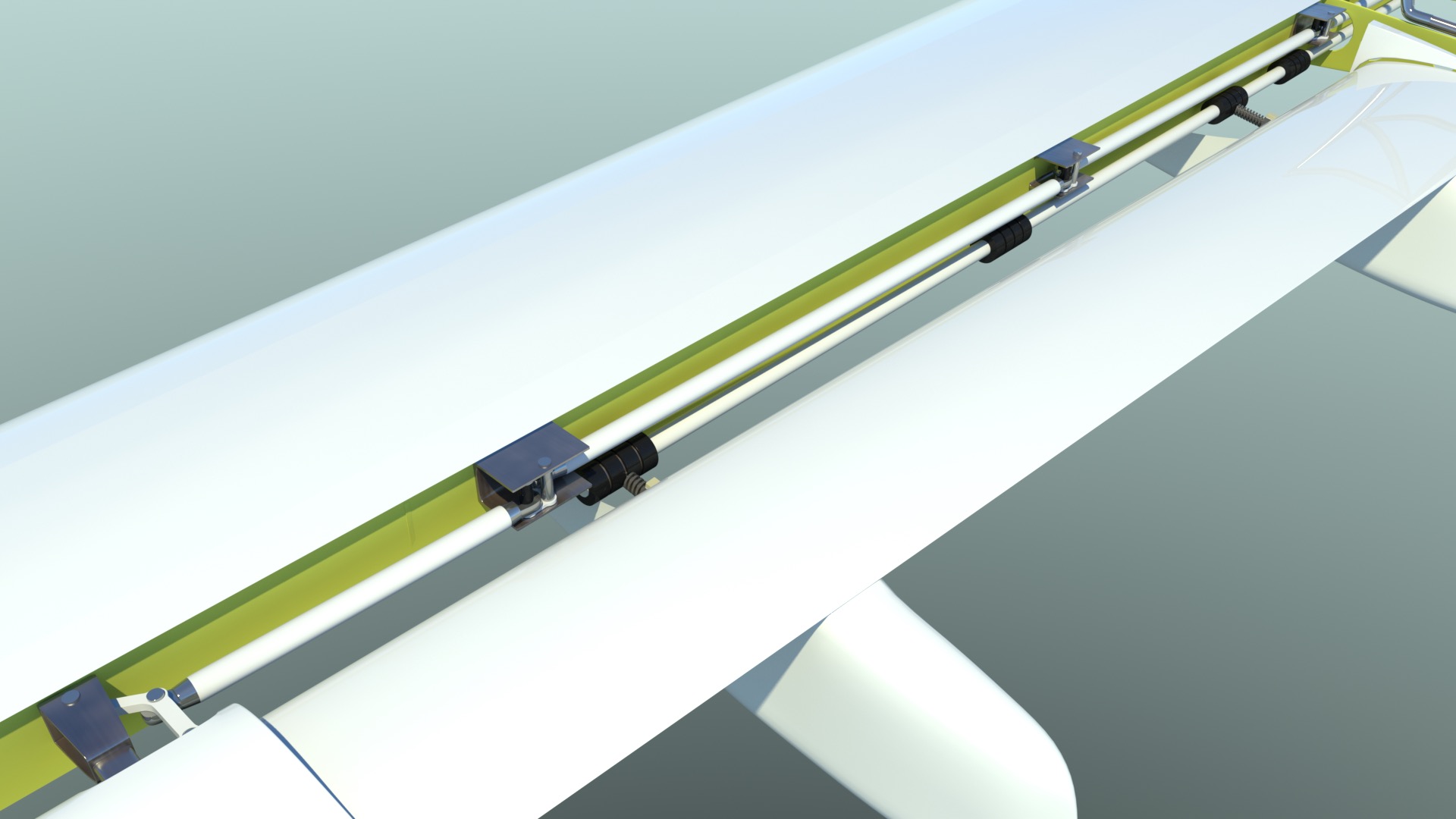 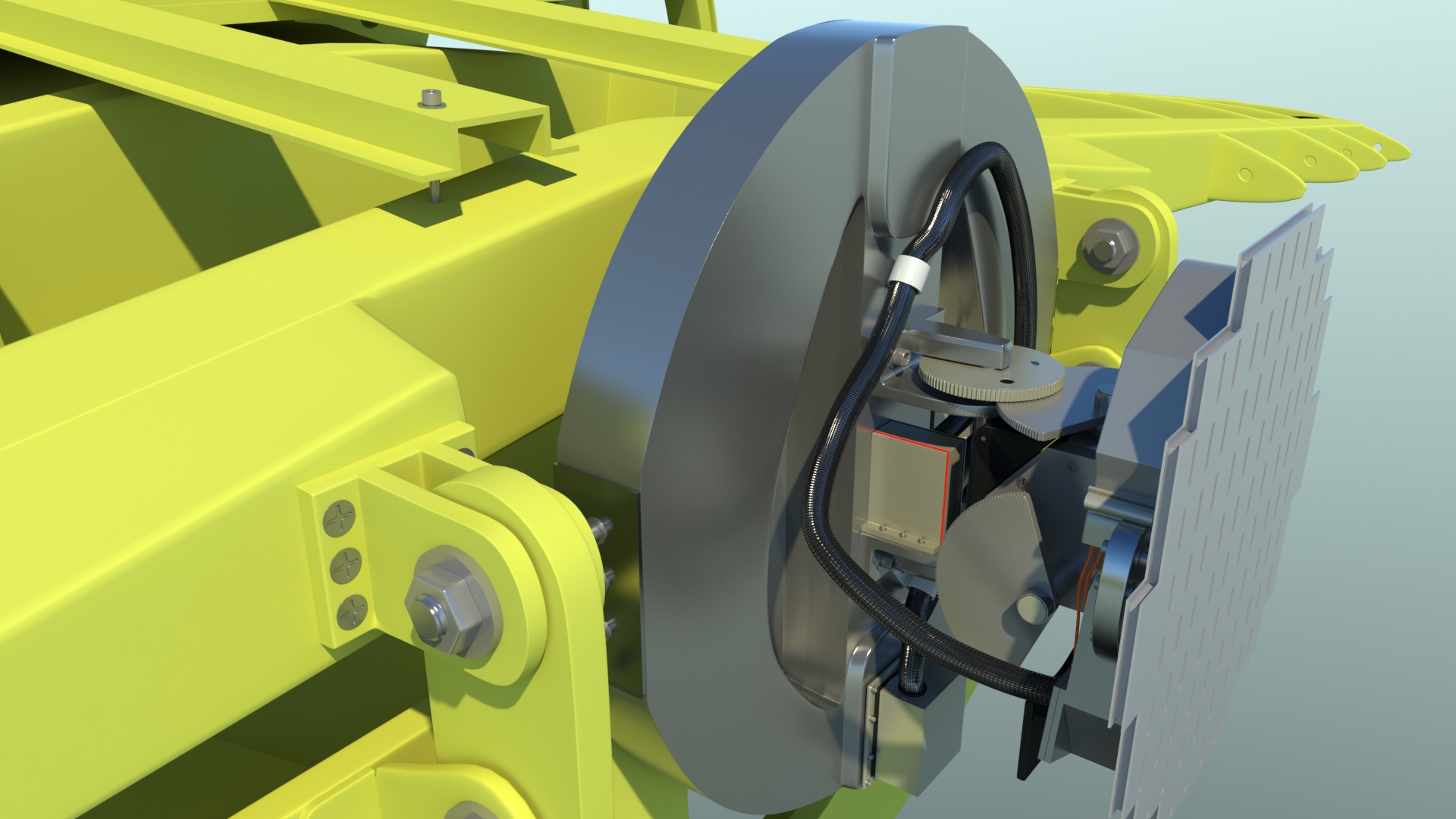 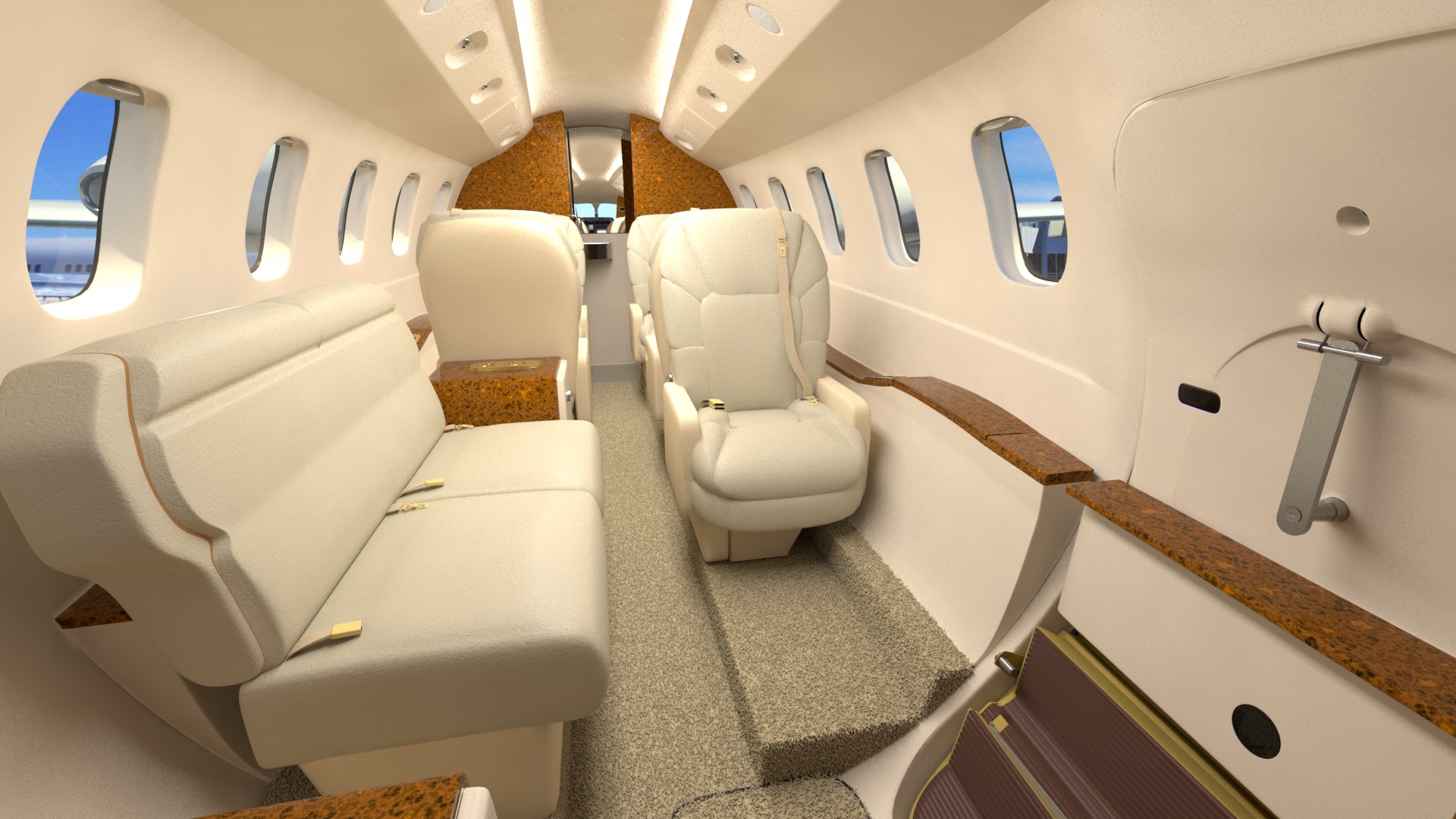 Each passenger has an individual reading light that can be turned on, independently of the master cabin lighting, and an individual airline-style window shade that can be opened or closed. (partially or fully) 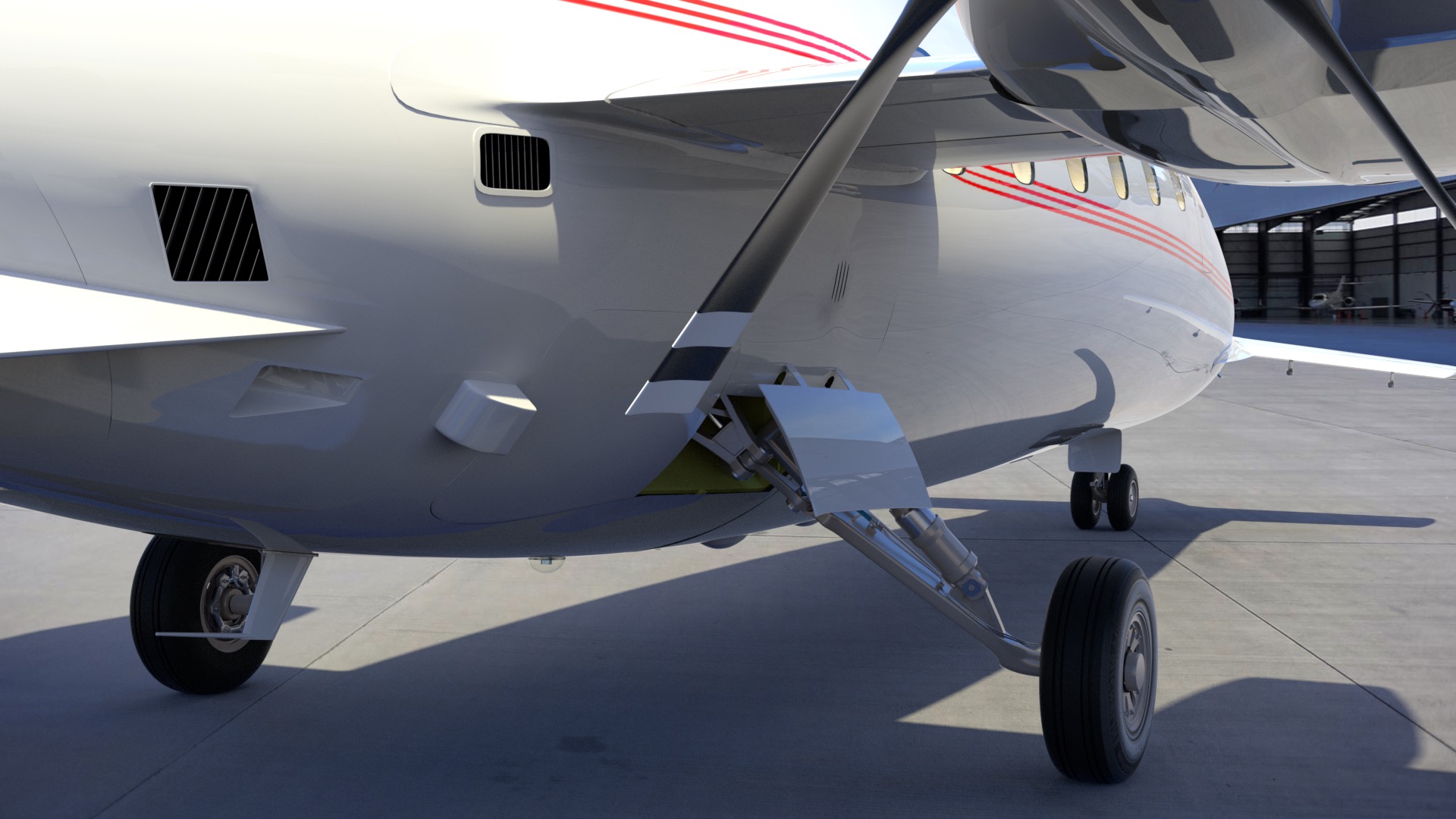 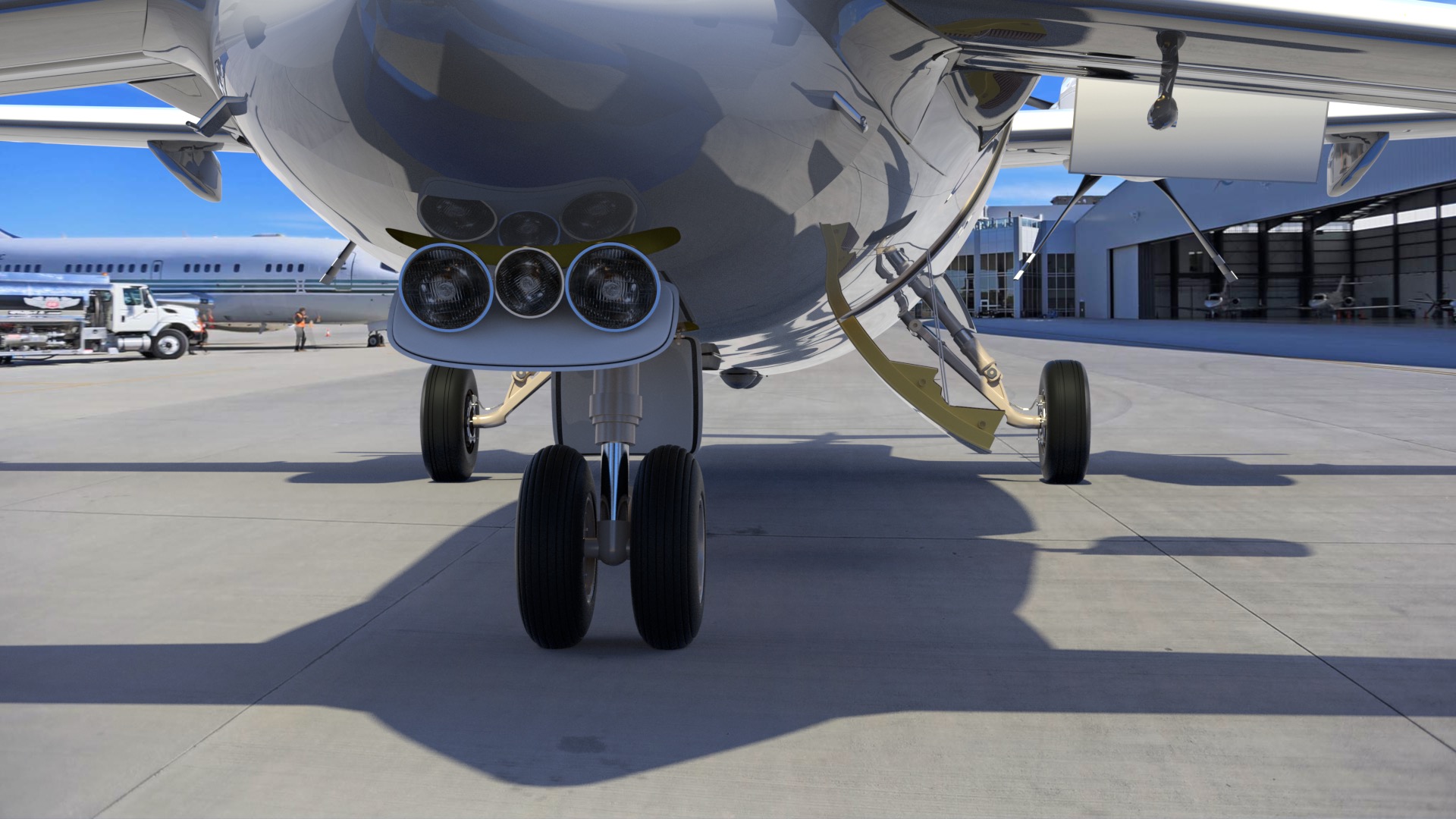 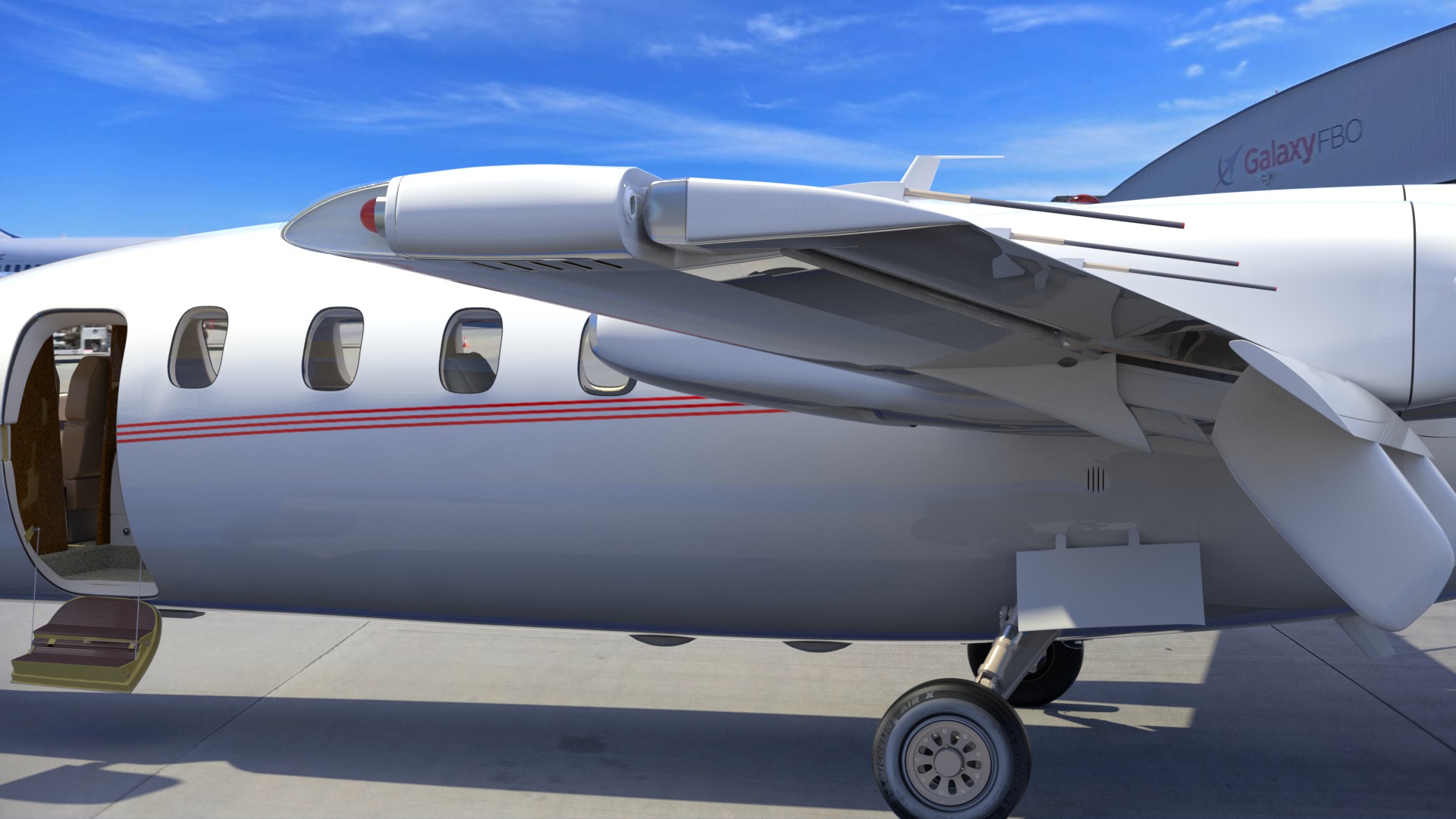 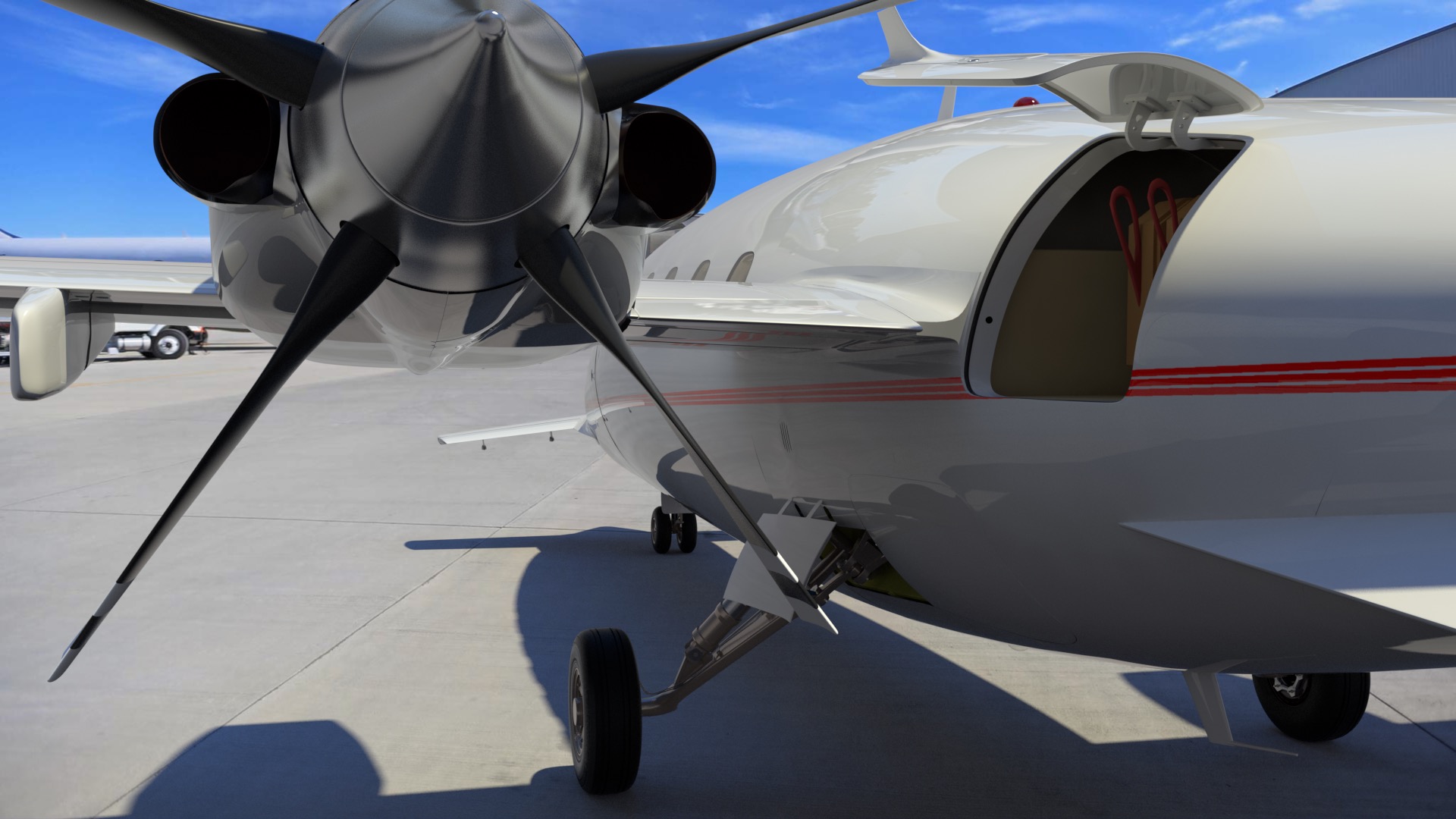 All of these color schemes are included with the MODO version of the model, and are easily customizable. 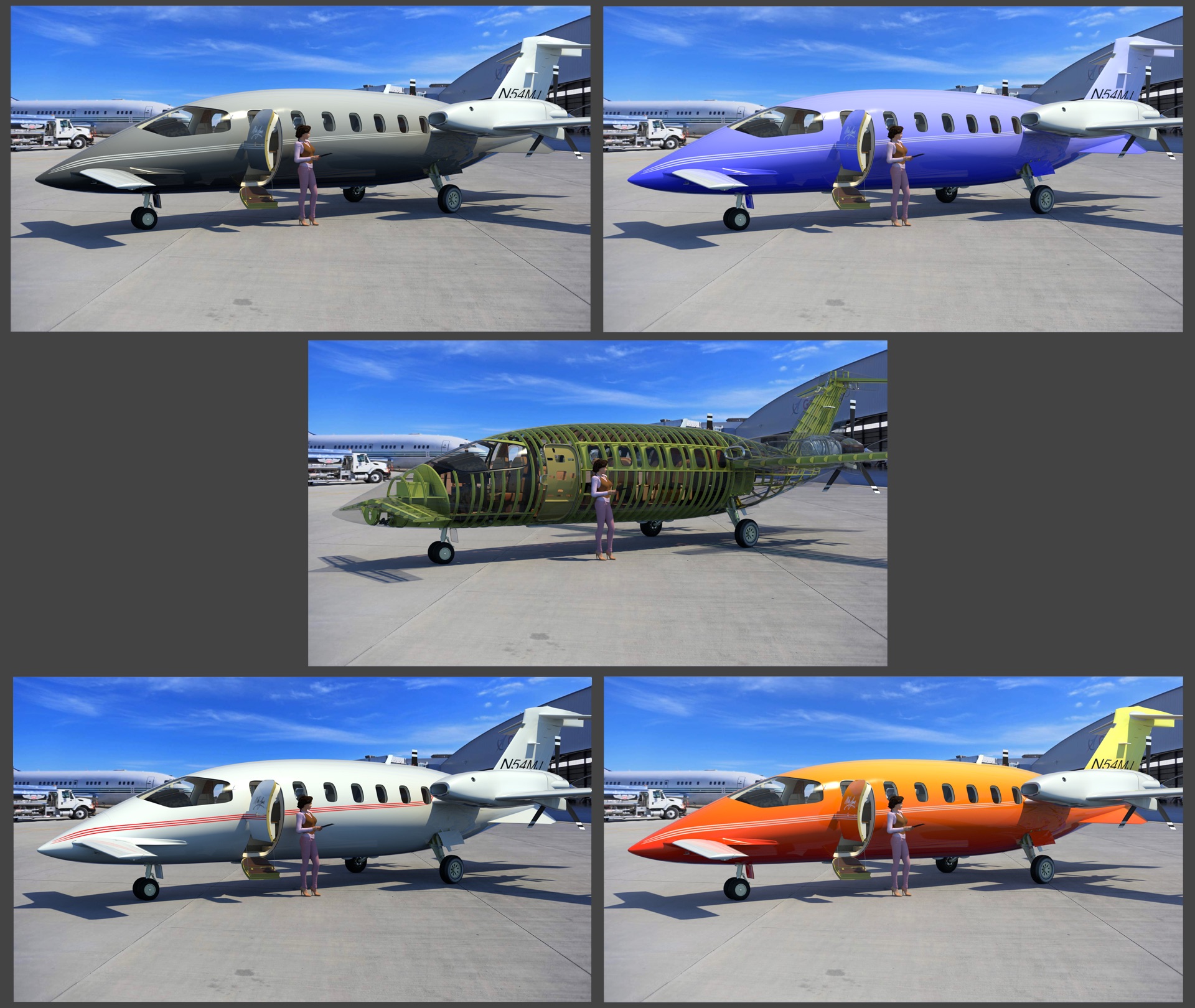